Scott Morrison: The Elephant In The Room. Best of the Archives. 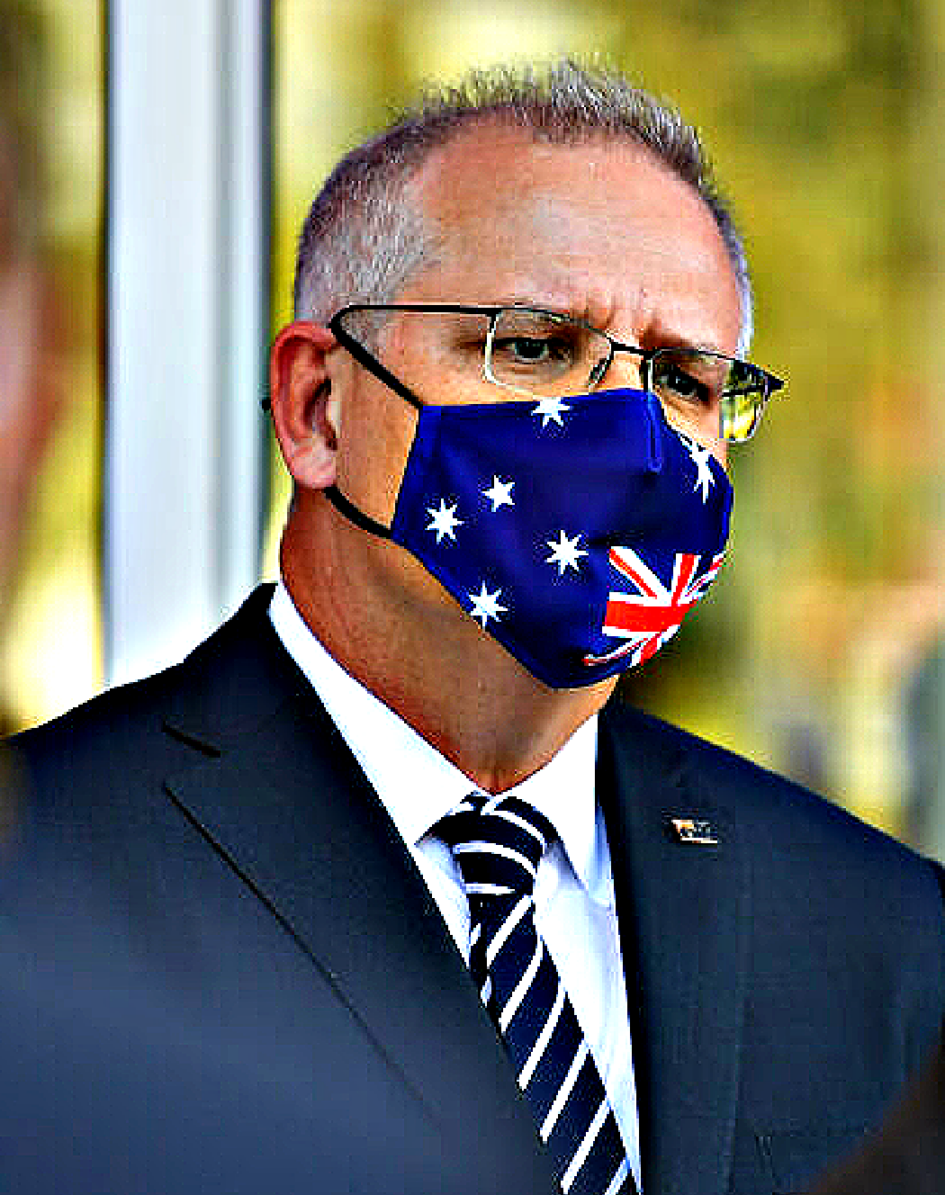 The single most fascinating thing about Australia’s Prime Minister Scott Morrison is: He Shows No Guilt.

Not a shred of remorse at having thrown millions of people onto welfare thanks to his absurd misreading of the Covid Scare.

Not for the tens of thousands of small businesses he’s destroyed; not for the millions of lives and careers damaged under the facade of keeping people “safe”; not for having multiplied the national debt several times over after being elected on a promise of good economic management.

Not a shred of regret at having deceived and betrayed the people the many so-called “Quiet Australians” who voted him into power, falsely believing he would protect their interests and the interests of the nation at large.

And not a single sign of guilt at having enriched his mining mates under the Cover of Covid, all at the expense of the average taxpayer, none of whom can now easily leave the country, many of whom are now unemployed.

Morrison has destroyed a country which took generations to build, all in a matter of months, under a Covid Scare which he has tragically and completely misread.

The knives are out.

Scott Morrison is loathed by the nation’s intelligentsia across the political spectrum. There has been a string of hard hitting takedowns in the nation’s media.

Proving that the distaste for Scott Morrison is by no means contained within the left, early on senior journalist Steve Waterson at the Rupert Murdoch owned national The Australian wrote:

“We’ve handed control of our lives to a clown car packed with idiots who have wasted billions trying to defeat this virus. They will never admit it was all for nothing.”

At Crikey, senior journalist Bernard Keane headlined a recent piece “Mates first policy: Scott Morrison’s No. 1 value is seeing the country rot from the head down”. And prefaced it with a quote: “Remember, my value is: we look after our mates. Scott Morrison, September 6 2018.”

Keane writes that two themes have run through the government from day one in 2013: “That it’s OK to use taxpayer money, and taxpayer-funded positions, for your own benefit, and the benefit of your mates, and for the benefit of your party; and that there are no consequences for failure and scandal, unless political calculation necessitates them.

“Those themes are potent indeed. Governments do not operate in a vacuum. The tone and example set by governments has impacts that ripple outward. First to the bureaucrats who serve governments, then businesses that work closely with government, then the broader business community and then, eventually, the whole community.”

If you think that’s harsh then try the other, “conservative” side of spectrum, with Augusto Zimmerman in The Spectator.

“There is little doubt that Scott Morrison is one of the worst prime ministers this country has ever had. Perhaps it is time for the Australian people to start looking for another federal leader – one who can respect the Constitution, have any proper regard for fundamental rights and freedoms, and demonstrate an authentic desire to hold State Premiers such as Daniel Andrews more fully accountable for the great damage done to our society, law and economy.”

The prolific Paul Collits, who writes across a number of publications, says: “Morrison’s instincts are solely directed to occupying the Treasury benches, for purposes that even he probably doesn’t comprehend. Morrison’s Government has been effectively rendered impotent by Covid-federalism and lunatic state premiers like Daniel Andrews.”

The scandal only deepens with a spectacular piece of reporting from Michael West Media, colourfully illustrated by a cartoon image of Morrison with a Pinocchio nose.

A story picked over by journalists for years without success has finally been nailed by Jommy Tee in a piece titled “Where the bloody hell is it? Did Scott Morrison lie about the report that saved his bacon at Tourism Australia?”

“Scott Morrison was sacked as managing director of Tourism Australia in 2006 with a year left to run on his contract. For 14 years the reason for the sacking has remained one of the best kept secrets in Parliament.

“Now, Freedom of Information documents reveal the PM either lied about a critical probity report, or numerous government departments and agencies are so incompetent that all of them – together, coincidentally, jointly and severally – lost it.”

Early in 2020 Morrison was determined to put himself front and centre of Covid and the cameras, desperate to rescue his reputation from his disastrous mishandling of the bushfire season.

For a period, he characterised himself as the saviour of the nation. Or a small town pastor embracing his unrepentant flock.

These days Morrison’s appearances are limited to spruiking multi-billion dollar deals, be it for vaccines or infrastructure or massive military spending or yet another piece of delinquent government largesse.

There has been zero sympathy expressed for the abolition of the right to protest, for those Australians being punitively punished with excessive fines, thrown to the ground, arrested in their own home. The Prime Minister has turned a blind eye to all this thuggish and totalitarian behaviour.

It is Morrison’s handling of the Covid Scare which is finally bringing him undone.

The utterly egregious advancing of the interests of his Rich-as-Croesus mining mates under the Cover of Covid has been one of the most outlandish in-plain-sight examples of corruption in the nation’s history.

When in times of war and crisis most journalists and academics feel some fealty to the government of the day, but Morrison’s long, rambling and extremely confusing press conferences drew criticism from many quarters.

Through his poor handling of the crisis the Prime Minister directly created a confused, panicked and deeply disturbed population.

All the better to exploit you.

You can make all the Animal Farm analogies you like; the sleek seal appearance of Australia’s Prime Minister and his advancement of prosperity theology is an affront to the many people whose lives he has disrupted or destroyed.

Yet there is one story Australia’s heavily manipulated mainstream media has barely touched and the country’s increasingly active independent media has been too polite to troll.

And that is the man’s religiosity.

Why does the Prime Minister act like there is no tomorrow?

Because as the world’s only Pentecostal Prime Minister, he literally believes the world is ending, that these are The End of Days.

The quasi-religious imagery the Prime Minister used since the beginning of Covid, “getting to the other side”, as in surviving spiritual tribulation in order to be reborn, should have raised alarm bells from the beginning.

There were many religious or spiritual overtones: That we must be cast onto our knees to find God. That he as leader has been anointed by God.

Australia has a “happy clappy” Prime Minister who is a member of a Christian sect many would regard as a cult and who would never have been elected if people understood the true nature of his faith.

Having done the Lord’s bidding, where is there room for guilt, or even doubt?

Traditionally in Australian public life religion has been considered a private matter.

In an election he thought he was going to lose it was Morrison himself who invited the television cameras into his church to film him worshipping in full song. The strategy worked, and there was a swing towards him in seats with high numbers of people of faith. There are still people in Australia who believe Scott Morrison must be honest because they saw him on television, singing at Church.

The standout exception to the Australian media’s determination to look the other on this issue has been historian James Boyce piece in The Monthly titled Scott Morrison and the Devil.

He argues that the world is so used to stories on the decline of Christianity that the rise of Pentecostalism, which emerged in Los Angeles in the early parts of the twentieth century, has been widely overlooked.

And then along comes Covid and Morrison’s destruction of the country.

Is that why there has been no outward or public display of sympathy for the millions people being thrown onto the scrapheap as a result of the Australian government’s over-reaction to Covid. The ones who are literally standing in dole queues as Scott Morrison assures everyone the government has their back and that the government’s response is “scalable and sustainable”, whatever that means.

Here’s one prediction easy to make, the merciless takedowns of Scott Morrison will continue in the coming days and weeks.

While we, as a nation, are spired in a rising swirl of circumstance in which many people see a spiritual element. And possessed with a Prime Minister who wears his faith on his sleeve for electoral gain, but stands in front of the nation showing not one single sign he possesses a conscience.

This story was written and compiled by veteran Australian journalist John Stapleton. A collection of his journalism is being constructed here.