“Quiet Australians” Are Realising Morrison Doesn’t Care About Them 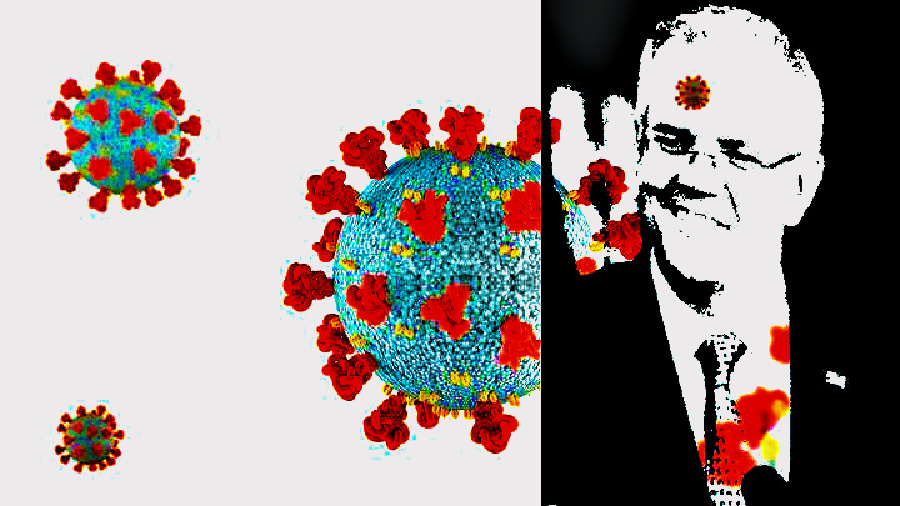 Australia is now in an election year, and the Australian Prime Minister Scott Morrison must face a dispirited, disillusioned and disengaged electorate sometime before June, most likely in May.

The nation’s already absurd political theatre is about to go into overdrive.

A news averse population, further turned off by the non-stop blizzard of Covid news drizzling through government funded and manipulated media outlets, is going to be much harder to deceive this time around.

Here one of Australia’s most prominent independent journalists Paul Gregoire gives his take on a widely loathed national leader whose phony “daggy dad” routine won him the suburban heartland last time round> Facing dismal polling, he will now have to reach deep into his bag of tricks in order to survive.

Quiet Australians, as Scott Morrison likes to term them, are currently waking up to the fact that he doesn’t really care.

The current prime minister’s form in the top job has consisted of seeking to avoid issues, blaming others for them and attempting to play both sides of the political divide.

While his term in office has been marked by multiple crises, which have called for strong leadership.

But Morrison has never roused the public with a vision of the way out of these ongoing hardships. And his pre-election pledge of a “far go for those who have a go” has certainly not come to fruition.

Following NSW premier Dominic Perrottet’s lead, the PM has overseen the strategy of letting Omicron rip with no protections in place. And it’s now apparent that he failed to give proper consideration to how this would affect the wellbeing of the economy, let alone that of the people.

In an attempt to distract the community from this, Morrison strung up Djokovic to placate the majority vaxxed population, whilst also letting dissenting MPs propagate antivaxx messaging, as well as only just having sought to curry favour with the antivaxx movement when it was calling for blood.

And it’s the current high rates of Omicron cases, combined with the PM’s refusal to make rapid antigen tests free, along with his bizarre ideas on how to fix supply chains, that are making quiet Australians realise that they don’t need another miracle election if this is what its going to deliver.

The PM doesn’t give a fair go

As he achieved his “miracle win” on 18 May 2019, Morrison thanked “quiet Australians” for voting him back into office, and he assured them it was they who had “won a great victory” on that night with his second coming.

The quiet Australians trope posits that there’s a silent majority, keeping their heads down and working hard, whilst trusting to leave the running of the country to the government without asking any questions.

However, the current government has just removed all protections against the new variant of the COVID-19 virus, resulting in mass illness, after the entire nation collectively locked down, shut down businesses, forwent seeing loved ones, wore masks and socially distanced for the last two years.

As COVID cases rapidly spread, restrictions were then placed on PCR testing, with the advice being to switch to rapid antigen tests, which Morrison refused to make free, and further, had failed to make available because he didn’t order any despite being warned of their necessity last September.

And while the unhinged ideas of Trump used to make Australians gasp, we’re now left with a PM whose suggesting a quick fix for the supply chain breakdowns would be to employ minors to drive forklifts, as well as calling on international students to “come on down” and fill work shortages.

Then there’s the sheer brutality of a leader, who, as the nation was moving into its deadliest week of the crisis, slashed pandemic leave payments down from $750 to $450 a week, in an obvious attempt to get COVID positive workers without backup finances to turn up to work regardless of illness.

Purposefully drawn-out, the Novak Djokovic saga gave the majority-vaccinated population an antivaxx villain to direct its pent-up anger towards, as the new variant was careless sweeping through the community.

During this manufactured news event, Morrison cast himself as the Christian crusader of old, slaying the heathen tennis champ, who was supposedly attempting to enter the country with the aim of undermining the nation’s vaccination rollout.

Yet, over the pandemic, our PM has been shielding his own MPs as they’ve been disseminating their own antivaxx propaganda. And the difference in this approach is made even starker as Djokovic wasn’t actually posing any real antivaxx messaging threat, unlike the federal Coalition members.

In the early days of the pandemic, Morrison let MP Craig Kelly broadcast so much COVID disinformation that when the backbencher quit the Liberals in February last year, he walked away with a sizable amount of Coalition voters.

And just this week, as George Christensen advised the nation not to vaccinate their children, rather than attempt to seriously rebuke him, the PM upheld the Liberal Nationals MP’s right to hinder a national public health strategy, and instead Morrison asked the public to just “ignore” his colleague.

This placating of antivaxx sentiment in his own ranks reveals that Morrison is well aware that he’s needs the Freedom vote to take out the next election.

Indeed, as the Freedom rallies amassed thousands on the streets last October, the PM, who instigated vaccine mandates, suddenly changed his messaging.

And when the Freedom marchers turned up on Melbourne’s CBD streets with a mock gallows last November threatening to hang premier Andrews and sending death threats to crossbenchers supporting a state government pandemic bill, Morrison sympathised with the rabble.

“Of course, there are many people who are feeling frustrated,” the PM said in response to a direct question regarding the threats of violence. “Now it’s time for governments to step back, and for Australians to take their lives back.”

And hence we now have the Omicron debacle.

But the clearest example of Morrison failing to lead the nation was when he took off to Hawaii for a family holiday during the unprecedented bushfire crisis that occurred over the summer of 2019/20.

The PM actually slipped out of the country unannounced, as he tried to avoid public scrutiny.

Morrison had to cut his Hawaiian sojourn short though, due to the outrage it caused once the people became aware of his having abandoned ship, while large tracts of bushland burnt to the ground, wildlife perished, and entire communities lost their livelihoods.

“I don’t hold a hose, mate,” the PM notoriously told a 2GB announcer on his return, as some sort of excuse for having gone on holidays during the crisis. “And I don’t sit in the control room,” he added.

However, Morrison does sit in the control room: that’s the essence of the role of prime minister. And most of us don’t have to take a Leadership 101 course to understand that the person in control does not abandon their charge, especially during the worst crisis the nation had then seen.

As for the ongoing crisis we’re now facing, a true prime minister would not have let a new variant of a deadly virus spread through the constituency prior to having any understanding of how it might impact, when preventative measures could have been taken.

Indeed, quiet Australians – and the loud ones – are coming to realise that all Scott Morrison really cares about is maintaining political power and corporate profits. And the population ought to remember this when they come to vote at the ballot at this year’s election.