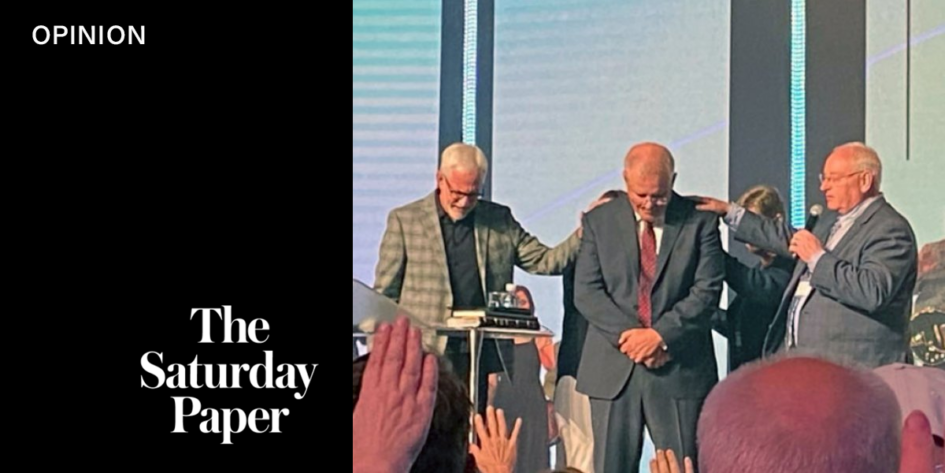 By James Boyce: The Saturday Paper

Australians have, on the whole, a traditional respect for other people’s religious beliefs, and believe it is irrelevant to the governing of the country.

A man who believes he is an instrument of God and that we are living through the end of days before Christ’s imminent return, while talking to Australians of “getting to the other side” as if they were his personal parishioners, is a man whose beliefs and his fitness for the highest office in the land should be thoroughly examined.

Below is an extract from The Saturday Paper by respected historian James Boyce, author of Born Bad: Original Sin and the Making of the Western World.

But first some background.

Boyce wrote in his seminal Matilda piece Scott Morrison and the Devil, the world is so used to stories on the decline of Christianity that the rise of Pentecostalism, which emerged in Los Angeles in the early parts of the twentieth century, has been widely overlooked.

Boyce argued: “The assumption that the prime minister’s Horizon Church in Sydney’s Sutherland Shire can be understood as just another conservative denomination is a major mistake: while Pentecostalism is outwardly conformist and, in its Australian variant, heavily influenced by American evangelicalism, its core teachings are very different from those of the evangelical and reformed churches that it is generally associated with.

The release of an unauthorised video of the prime minister preaching at his church’s  national conference last month has given Australians a glimpse of an unknown man  in another world. Here was a leader clearly at home with his people, using mysterious  metaphors to encourage fellow believers in  a spiritual war in which Satan and the spirit  of God are fighting it out for the souls of our  nation’s young people.

Even those familiar with traditional  church services will not easily understand the  nature of Scott Morrison’s fellowship with his  scandal-prone but always forgiven cabinet colleague “Brother Stuie” Robert, “a great  brother of mine over a long period of time”.

Nor may they comprehend the divine healing  disguised in a prime ministerial embrace: the  fact he has been “in evacuation centres where  people thought I was just giving someone a hug  and I was praying”.

No one who has heard this sermon – so  starkly different from that which might be  heard in a suburban congregation or even a  traditional evangelical church – can continue  to accept the pretence that the prime minister’s Pentecostalism is so conventional it needs no  further explanation or is just a private religious  matter of no public relevance.

What is required of the media is no different  from the approach that would be taken with a  politician proclaiming adherence to any other  value system – have its teachings transparently  communicated, so that people can understand  what their representative believes.

Maintaining a distinction between public image and doctrinal belief has been an effective strategy for both Pentecostal growth and prime ministerial success. Seeing  Morrison preach has confirmed the dangers  of this.

The argument that it is necessary to hide the full truth except from those who are  considered ready to receive it is a slippery slope to cultism in both its religious and  political dimensions. To question and critique  is not, as Fogarty has argued, to be part of an  inquisition; it is to participate in democracy.