The Enemies of Freedom Double-down 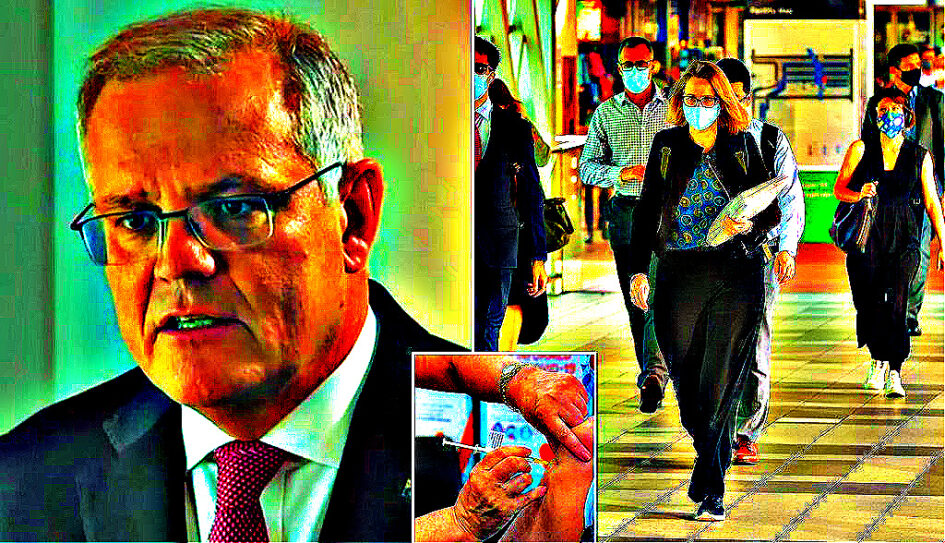 Vaccination passports may soon be required for Australians to travel interstate, Prime Minster Scott Morrison has announced in an interview.

The comments come as vaccine hesitancy continues to grow across the country, with more citizens beginning to question the safety and efficacy of the jabs.

Morrison told 9 News political editor Chris Uhlmann that the first step in opening Australia’s borders was ‘ensuring the safety of travel within the country’.

He has suggested people who are fully vaccinated should be free to move across the country, regardless of outbreaks or local lockdowns. While those who aren’t vaccinated, shouldn’t be.

“To move within borders if you’re vaccinated, how will we prove that, will we need internal vaccine passports?“ Uhlmann asked.

“All of those arrangements will have to be put in place,” Morrison responded.

The Prime Minister went on to stress that providing proof of vaccination for domestic travel would require a mutual agreement between states and territories:https://www.youtube.com/embed/sK3mNSlvnVg?version=3&rel=1&showsearch=0&showinfo=1&iv_load_policy=1&fs=1&hl=en-US&autohide=2&wmode=transparent

“Those public health orders are the instrument that is used legally to prevent Australians moving from one state to another,“ Morrison said.

‘How dare you think to move about your OWN COUNTRY without taking the jab!‘

Morrison said this will be part of a long-term strategy to re-open international borders, which will also be governed by medical advice that ‘will guide every step of the way’.

The Priests of Scientism — the ‘medical experts’ — continue to set the international agenda.

The Prime Minister confirmed the re-opening of international borders would be ‘a gradual process’ to prevent the borders being thrown open and closed.

“Opening borders will be at a risk that Australia can manage safely and to ensure that we understand the risk environment that we are operating which is changing daily,” Mr Morrison said.

Morrison also confirmed earlier reports suggesting the next stages for border re-opening would see vaccinated Australians be able to travel overseas and for others to return after ‘approved’ jabs.

Earlier in the interview, he addressed growing calls from business groups, health officials and his own colleagues to set a framework for reopening the international border:

“I understand we want to be able to prepare to get us into a place that when it is safe to do so … but right now it is not safe to do so,” Morrison told 9 News.

Who writes the scripts for this puppet?

They want us to believe that it is not safe to re-open international borders, despite the restriction itself not being based on any advice. Not that it would hold any weight with advice anyway.

Furthermore, the PM reveals they will be doubling-down by increasing movement guidelines.

Morrison is trying to shift attention to domestic borders in a bid to restrict the unvaccinated.

Interesting that this announcement comes at a period when vaccine hesitancy is at all all-time high.

Australia’s fortunate position to be behind the rest of the world in the Operation COVAX rollout has allowed the public to see some of the side effects that pro-health campaigners warned about.

Every week we see new cases of blood clots, most recently an 18-year-old trainee nurse in Brisbane.

My personal observation, in conversation with many, is that suspicions about the vaccine are high.

Reports suggests a large portion of adult Australians say they are unlikely to be vaccinated against COVID-19. This is being viewed as a “new sign of concern” in the ‘fight against the virus’.

Doubts about vaccine side effects top the list of reasons for the rising level of vaccine hesitancy.

Meanwhile, a new survey also shows people believe there is no rush to take a jab at present.

5 per cent of adults surveyed said they were “not at all likely” and 14 per cent “not very likely” to be vaccinated in the months ahead. This is almost a quarter of those surveyed.

The survey, an initiative of The Sydney Morning Herald and The Age (with research company Resolve Strategic), found vaccine doubts were stronger than in Ipsos polls carried out in February and September, before an official ruling in April about blood clots linked to AstraZeneca doses.

This could very well mean the actual number is much higher now.

“The problem is partly the practical access to vaccines, partly a nervousness about side effects and partly a risk judgement about whether they need to be vaccinated given the low risk right now,” Resolve Director Jim Reed said.

Information spreads like wildfire. The dangers of this mass experiment are becoming more apparent in the mind of the public, and as a result, the establishment is clamping the agenda further.

The fancy PR has now deluded into simple and clear messaging — trust the experts!

A leading South Australian immunologist has urged Australians not to ask questions about the COVID-19 vaccine and just simply take the jab when it is offered to them.

Professor John Hayball told Sky News: “But I would encourage everybody out there offered a vaccine, don’t ask any questions really, please take it.”https://www.youtube.com/embed/2raFhnT0J9k?version=3&rel=1&showsearch=0&showinfo=1&iv_load_policy=1&fs=1&hl=en-US&autohide=2&wmode=transparent

‘Be a good citizen and roll up your arms!’

‘Trust us, trust the experts — we’re your friends!

‘There’s no need to think for yourself now, is there?’

The nature of messaging now seen from the establishment has reached Orwellian levels.

As opposition grows, authorities are clearly growing unhappy with momentum.

Their grand plan to create a new-age social divide is being exposed for the world to see.

The introduction of vaccine passports has arrived and is already tipped to cause a divide between many social classes. This will subsequently lead to a worldwide system of vaccine apartheid.

Dr, Clare Wenham, Assistant Professor of Global Health Policy at the London School of Economics, recently expressed concerns over the introduction of such programs:

“From an ethical point of view vaccine passports are completely unacceptable. You’re going to create a two-tier system and history shows that when you create division within society it leads to civil unrest.

She added: “On a global level, it will affect poorer countries and it’s going to entrench inequality. It will also penalise the small number of people who can’t get vaccinated for medical reasons.”

What do you think this look like on a domestic level?

“The use of digital certificates for travel is concerning — it has implications for human rights, and it limits access to travel,” he continues, adding that there was no clarity on what they will be used for, and if they will be linked to other databases.

It is not simply ‘conspiracy theorists’ calling out against this system of tyranny.

Vaccine passports and restriction of movement is fundamentally incompatible with a free society.

There are already calls for consequences to be established for those who refuse COVID-19 vaccines, including welfare payments to be withheld, flights restricted and employment rejected.

Morrison told Australians last year he would expect COVID-19 vaccines“to be as mandatory as you can possibly make it“. Now, we are beginning to get down to the nuts and bolts of the plan.

A complex legal battle may potentially ensue if this path is continued to be followed, pitting the Constitution and human rights charters against the need to suspend these under emergency pretext.

Either way, the message is clear as day.

The COVAX Operation serves two purposes: To create conditions that will expel ‘undesirables’ from society through coercion, whilst also being able to identify exactly who they are.