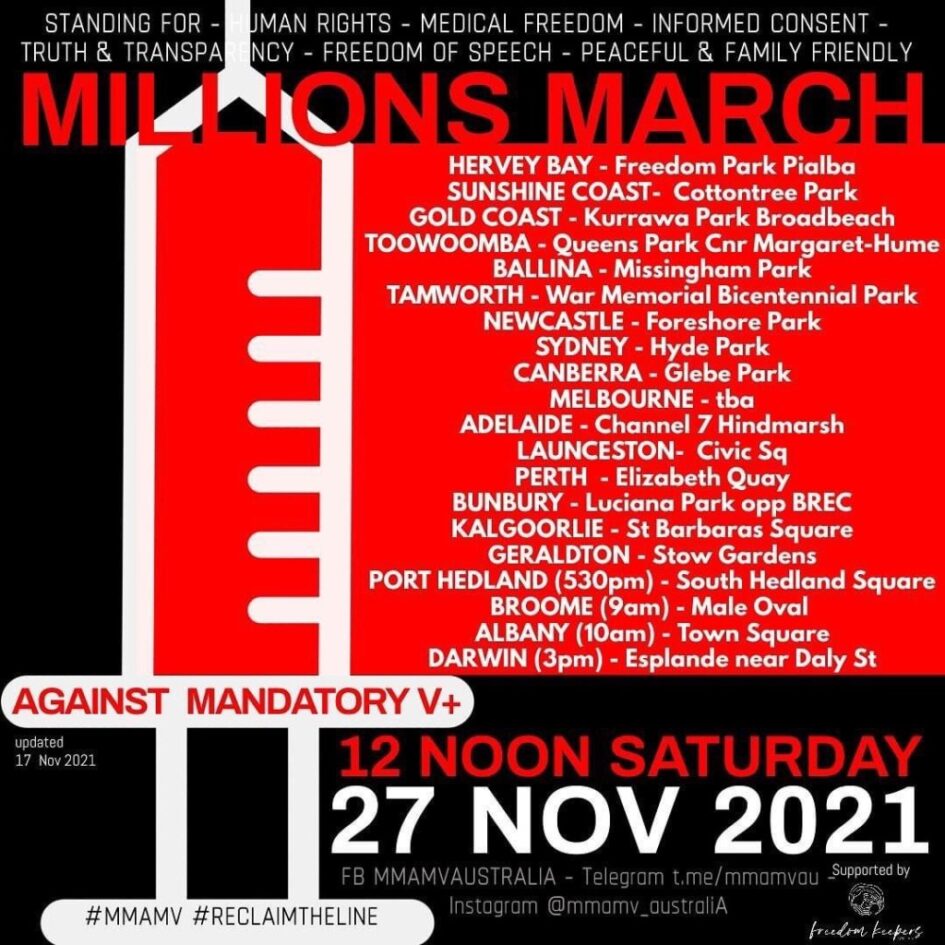 With Real Rushkan, TOTT News, Reignite Democracy Australia, Hold the Line, the Aussie Cosack and Others.

With a number of books now emerging about the Covid era, including most recently Robert F Kennedy’s The Real Anthony Fauci: Bill Gates, Big Pharma, and the Global War on Democracy and Public Health and Alex Berenson’s Pandemia: How Coronavirus Hysteria Took Over Our Government, Rights, and Lives it has become clear that military and intelligence agencies have been closely involved from the beginning.

In this vein, it has long been claimed, in what at first seemed like pure conspiracy, that Australia, with its small population, was the testing ground for techno-fascism.

While the Australian authorities have fallen obediently into line, the political, medical and media establishment all working to provoke fear and confusion, destroying businesses and lives in the name of keeping Australians “safe”, the people themselves are proving far less malleable.

The country is being ripped apart by the very people and agencies the public had come to trust: and the originally brutal, violent suppression of dissent is now morphing into nation wide protests. The weekend’s dismal weather across much of the eastern seaboard did nothing to quell protests.

This unprecedented period of Australian history has also birthed or propelled independent media, with legacy media looking more and more irrelevant, and dishonest.

Here’s a sampling and links from the last weekend.

To see the full TOTT NEWS coverage, including clips and material from remote parts of the country including Broome and Alice Springs, see their full story here.

The Real Rukshan has emerged as an internet phenomena for the simple reason that he did what the mainstream media should have been doing, picked up his camera and filmed what was happening in the streets, from the brutal and violent actions of police in the earliest months of the Covid Scare to the present.

The most common word he utters is “thankyou”, as protestors treat him as a celebrity and thank him for his work.

Here is 2 hours and 38 minutes of live stream from yesterday’s protests in Melbourne.

As the most politicised and therefore most disastrously managed disease in history, Covid, at the same time as transforming the media landscape, is also transforming politics.

As they continue to bang the drums of fear and hysteria, the mainstream parties look more and more out of touch.

Reignite Democracy Australia, whose gutsy performance in covering the early days of protests saw her jailed by an out of control autocratic Victorian government, now has money and resources behind her.

Here is a picture of her in a helicopter over Melbourne yesterday.

To see Reignite Democracy Australia’s full coverage from around the country go to their Telegram Channel here.

With hundreds believed to be numbering into the thousands of police being stood down from their duties for refusing to be vaxxed, and huge disquiet over the reputational damage they have suffered as a result of being obliged to enforce draconian and non-sensical laws and insane bureaucratic diktats on the public, Cops for Covid Truth is another major group to have emerged from the Covid era.

Solid of nature by dint of their profession, dissident police have become a major voice in the campaign to grant Australians back the freedoms they long accepted, and to put a stop to the authoritarian derangement which has destroyed the Australia of old and made it an international pariah.

You can follow their contributions and unique take on the demonstrations on their Telegram Channel Cops for Covid Truth.

To view their story: Huge freedom protests again bring Australian cities to a standstill. Hundreds of thousands of Australians come together across more than 30 regions to say NO to mandatory vaccines.