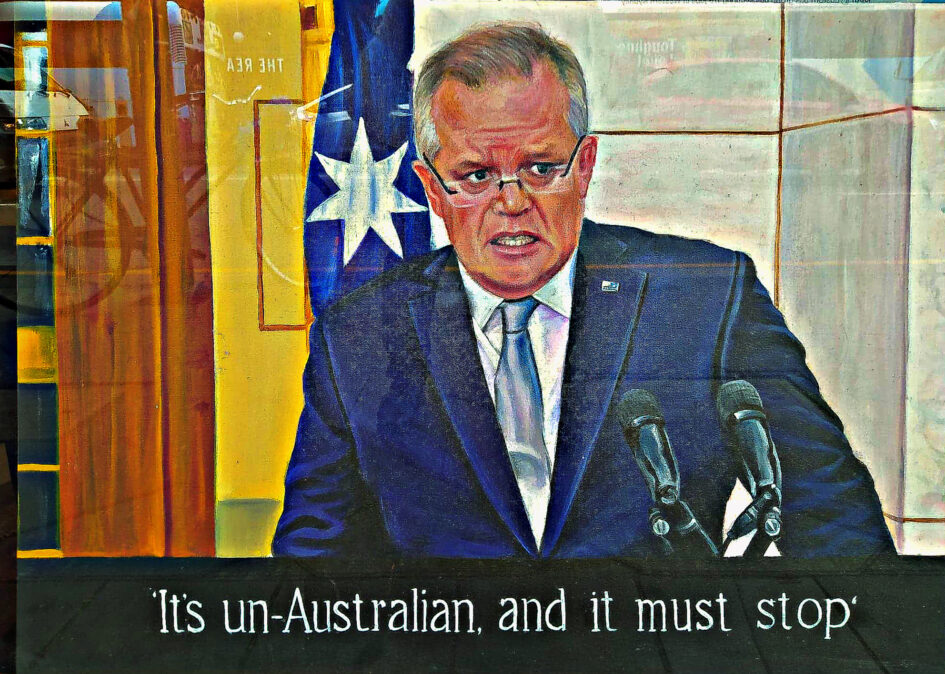 By Jack Waterford: Pearls and Irritations

Some prime ministers are more practised liars than others. Some can confuse, distract and prevaricate in such a way as to strangle the truth. Morrison, however, is a special case. He does not seem to recognise any obligation to account. He resists any scrutiny and while using words such as “transparency” almost everything he does is opaque.

About 20 years ago, the phrase “plausible deniability” was in vogue, in part because John Howard denied any knowledge of the fact that boat children at sea had not been thrown overboard. A Senate inquiry dragged from a number of officials, including a then deputy secretary of the prime minister’s department, Jane Halton, admissions that they had come to learn that the children overboard story was a furphy.

They said they had told ministerial officers, including senior minders in the Prime Minister’s Office.  None of these, apparently, had thought this something important enough to bring to the prime minister’s attention, although he (and his defence minister) were continuing to make statements alleging that refugees had thrown their children overboard so as to force a rescue by the Australian Navy.

The prime minister refused to give evidence or to  allow any member of his staff, past or present, to appear before the committee.

In 1983, Malcolm Fraser called an election. The Labor Opposition, under Bob Hawke, alleged that Budget projections had slipped badly, and that economy was in far worse shape than Fraser and his Treasurer, John Howard were pretending.  They were right.

John Stone, then Treasury Secretary, realised that the government would be likely to blame Treasury, rather than decisions of ministers, if the facts emerged before the election, or if, afterwards, the incoming government “discovered” a “black hole”. Adroitly he produced and sprung upon Howard  written advice telling him of the budget blow-out, and its likely dimensions.

Howard was in a bind. He had his own suspicions about a blow-out, but as long as he did not officially know, he could blandly deny it. Stone deprived him of an alibi. He did not want to lie. For the last week of the campaign, he had “reduced visibility” lest someone ambush him and ask him directly about the state of the budget.

Someone had told Howard the truth, in a way he could not deny. It was as if he then  decided that no one should ever be seen to tell him the truth again.

This was why he worked through the PMO, mostly with oral briefings. There are many records of what went into the PMO. But very few which recorded what the staff chose to tell him. He was, of course, very interested in detail, as Morrison is. But his fingerprints could rarely be found.

On occasion indeed, some minders took the fall by accepting personal responsibility for matters that had almost certainly engaged the attention of Howard.

Successive governments have tried to follow the Howard system, if in ways adapted to the character of the prime minister, and, in several cases, such as Kevin Rudd and Tony Abbott, the personality of their chiefs of staff. But deniability is the key.

Some prime ministers are more practised liars than others. Others can confuse, mislead, distract and prevaricate in such a way that the truth is strangled. Morrison, however, is a special case. It’s because he does not seem to recognise any obligation to account. He uses words such as “transparency”, but almost everything he does is opaque. He resists any scrutiny — even more does he resist the imposition of systems by which a review reveals how and why money was spent.

With floods, and bushfires, and  vaccines, he blandly announces that he has allocated $X  billion to this relief project or that, but no actual fund is created, and it is almost impossible to track the spending that has occurred.

With his latest wheeze, the giving out of tens of billion to private enterprise with only minimal accounting requirements, and hardly any protections against fraud, Australia has got fairly close to arbitrary government.

Most often we cannot know if there is corruption — even though there are strong grounds to suspect it — because of the looseness of arrangements, the close personal involvement of ministers making decisions on frankly political grounds, and the open derision for financial conventions, many of which are constitutional.

The weakest High Court in many decades sits alongside regulators and watchdogs stripped of resources, with leaders sometimes seeming to be chosen for timorousness.

Many politicians dismiss concerns saying, in effect, that the public does not care.

I do not believe that, but I do think that we need better methods of informing the population about how they are being ripped off.

If there to be a clear sign that citizens care and that they will kick back, it might well be from a general dismay about the ill-treatment and abuse of a young staffer, first at the hands of an individual minder, and, later, by the institution of government itself.