The Tragedy of Australia 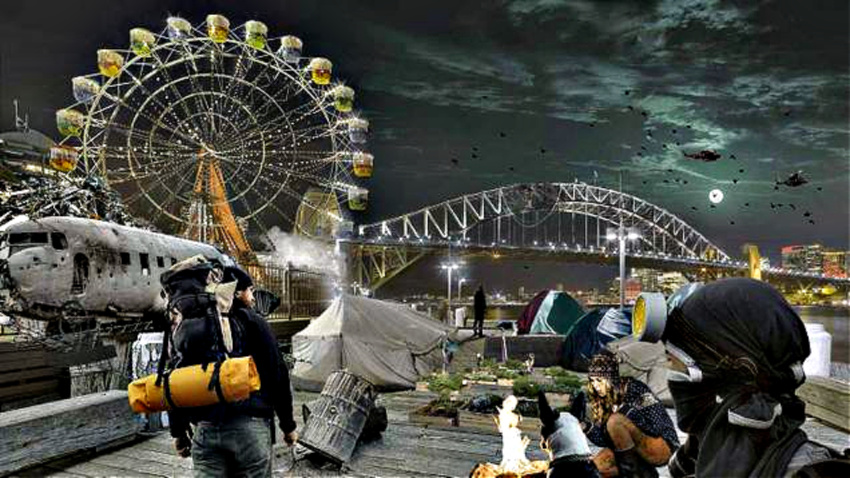 THE British historian Guy de la Bédoyère claims that ‘Australia is falling apart’. Off Guardian suggests that we are ‘going full fascist’. Daily reports in France, Russia and everywhere in between and beyond, hover between pity, amusement and disbelief. How did this happen – in Australia? The overseas storytelling can barely keep up with the never-ending stream of new announcements designed to grind us into the ground.  But on and on it goes.

There is, at last, a book-length account of Australia’s eighteen months of madness that will either warm the hearts of Covid realists, remind us of all the Covid policy absurdities or perhaps simply provide yet more chilling evidence of the sinister forces at work that are changing us irrevocably.

Unfolding Catastrophe: Australia (Sense of Place Publishing, 2021), by John Stapleton, restores – though perhaps only a little – the faith we ought to have in the journalist class, so utterly diminished by their sitting out the crushing of our lives (at best) and their active collaborating in the spread of Covid propaganda (at worst).

Recognising early on the biggest story of all of our lives, Stapleton set out to record in graphic detail and with authenticity the developing catastrophe, from the toilet paper crisis at the start to the emerging apartheid regime for those who refuse the State Injectible.

Stapleton records with palpable astonishment the now familiar litany of harms that have been done, not only to the body politic, but to our core values, indeed, to our very sense of our country. Our place.

They include the impositions of lockdowns that do not work but cause harm beyond telling; the ‘wildly inaccurate’ modelling that predicted catastrophe and instead merely delivered fame and riches for those involved; the succession of non-medical interventions with no basis in science and without popular understanding that this is the case; the low information voter; the punitive policing; the absence of real leadership in the crisis; the incoherent messaging from the top; the disaster that is ‘National Cabinet’; magic money tree economics; the relentless announcables; the Covid cronyism; the entrenching of power by the political class.

This all amounts to ‘a radical social experiment going against decades of epidemiological wisdom’.  It has been, Stapleton suggests, ‘demonic’. Not just stupid and deranged, but evil. It has caused, as we now see in all our empty churches, ‘spiritual damage’. Earthly lives gone, and souls lost. A sad tale of deceit and compliance, of induced fear, isolation, economic deprivation, destroyed friendships and civil fracture. A creepy but unmistakable feel of the Biblical End Times, the streets empty. Astonishing submissiveness. A story of manufactured narratives, of a ‘disinformation feedback loop’ as Stapleton reports, his previous faith in the scepticism of his countrymen utterly destroyed. Societal dysfunction. Many ‘conspiracy theories’ across the internet have proved to be spot on.

The book draws upon a broad range of expert observers, who include journalists of every colour and distinguished academics such as the Spectator’s Ramesh Thakur, a breath of fresh air amid the fetid atmosphere of secular decline. Ramesh’s call on the Covid response, as reported by Stapleton: ‘The greatest mistake in history’. World War One is right up there, but this call is no exaggeration.

Rational argument simply does not work with our rulers. Copious evidence relating to the policy disasters of the pandemic never breaches the walls of the bubble. As Stapleton said in an interview with Sydney Criminal Lawyers, ‘it all fell on deaf ears’.

Is the tide of opinion turning against the ever-increasing crush of medical technocracy? Stapleton has cautious optimism. Speaking up for those of us who, mercifully, live outside the cities, he says: ‘But there are no cases or virtually no cases in this area. Nobody knows anybody who has died.’ Pennies may, at last, be dropping. Crisis? What crisis? It is a case-demic of a very mild strain of the initial virus, without the remotest hospitalisation crisis

Chillingly, as Stapleton says, ‘All of this has been done in secret, and in our name.’ The parliaments rarely sit. Public Health Orders trump democratic processes. Reasons are never given for policy actions beyond formulaic tosh. We never signed up for this.

Steve Waterson, one of the few consistently sane voices in the corporate media, describes the book as a ‘devastating indictment of Australia’s response to the Covid pandemic’. I am glad Waterson didn’t confine himself to ‘Australian governments’, for we are, all of us, complicit in this truly diabolical attack on everything we have all lived for. Stapleton uses the term ‘manipulated’ and ‘held hostage’ to describe our corporate media’s role in the fiasco.

Stapleton, alone, it seems, among our publishers and authors, has taken a stand – for freedom, common sense, perspective and Aussie values. His is a stand for life itself. His work shames his colleagues who have chosen to sit quietly in the corner these past eighteen months, or worse, to join in the chanting for the Covid Fascist State. This book is the methodical work of a brave truth-teller who is willing to call a spade a bloody shovel, in the best tradition of fair-dinkum journalism.

As the first draft of history, this magnificent book should be marked ‘essential reading’. Normally one might add here: ‘Send a copy to your member of parliament’. Alas, I fear, in this case, such a course of action would be pointless. Our rulers are in and settled, on a good wicket, and they intend to bat on.

A ‘signal collapse and rearrangement of society’?  Who on earth could disagree?

Images of a post-apocalyptic Australia courtesy of Xbox.