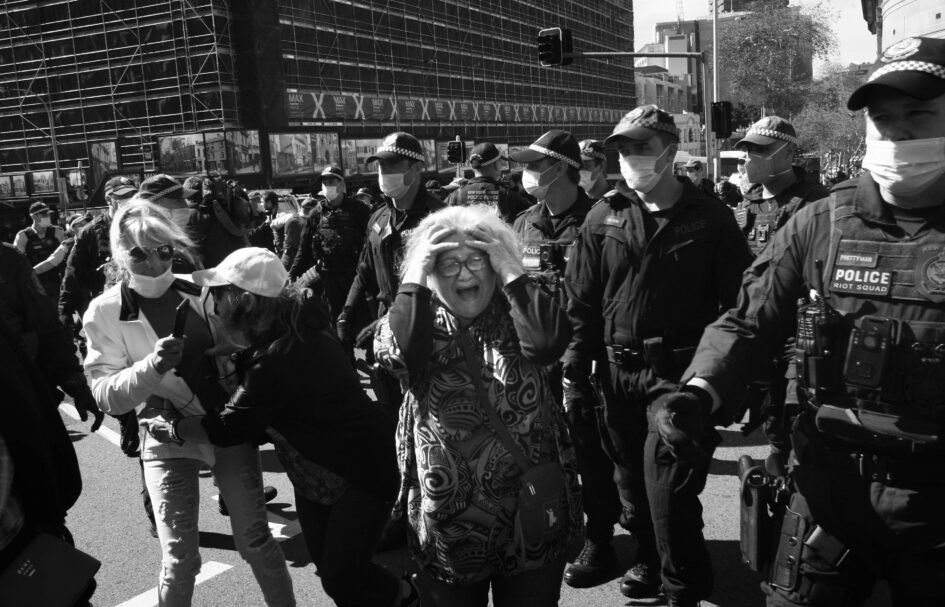 There is an old saying about journalism; it is the first draft of history. Part of the problem with the deteriorated and manipulated state of legacy media was that this noble function was now lost. As a former reporter, Old Alex naturally focused his interests on the media coverage; for despite all their detachment from reality in what could almost be called a schizophrenic wash, this was how national narratives were forged.

In the end there was such confusion in Australia, such an appalling group derangement, that no historian, however fastidious, could document all the travesties, the personal tragedies, the talking heads, the propaganda, malfeasance, maladministration and the absolute blizzard of nonsensical political announcements during 2020 and 2021.

Grandstanding politicians desperately tried to keep themselves in front of television cameras. The winter light, the winter of a broken economy, was all too apparent to those who had lost their jobs and their livelihoods; the For Lease signs leaching across precincts everywhere from Katoomba in the Blue Mountains to Sydney’s old entertainment district of Kings Cross, closed shop after closed shop, down to the world famous Bondi Beach.

There were a million stories, millions of lives entrapped. Millions of ways this story could be told. This is just one of them. Everyone’s story varied.

His, as they had always done, came in pictures. Only a small percentage of the population thinks in pictures, but he did.

The intensity of the episode, that dangerous derangement, would define us all. Everyone was imperilled in a circumstance, trapped in places they did not want to be, caught in relationships barely tolerable, or just simply plain bored.

House arrest induces cabin fever. Some like it, some adjust, but for others it makes them not just stir crazy, but angry.

For Old Alex, it sent him right over the edge. The lucid waking dreams that had swept through him since childhood picked up apace, haunted at every moment by an urgent messaging he could not decipher, flying high over the suburb in which he was now entangled as fragments of former lives drifted through the fabric of things; while at the same time he was entranced, as if seeing the planet surface for the first time, by the beauty of the place in which he had been stranded.

He still didn’t understand why at these times in history his head began to swarm across places and suburbs; that, if not possessed, he at the very least felt entangled with very different intelligences, from very far away.

Enough of the cosmic thrall. In the coming months many would comment on the strange spiritualities of the time.

Bernard Keane, author of The Mess We’re In and a senior reporter with leading news site Crikey, a major player in Australia’s increasingly lively and thereby powerful independent media, mounted repeated attacks on government policy. He wrote that as entire industries were shuttered and hundreds of thousands of people found themselves out of a job, the government wouldn’t even think about a change in its economic strategy, for bureaucratic and ideological reasons.

“Construction and non-essential manufacturing are candidates for closure as well. Hundreds of thousands of businesses that won’t be in a position to borrow, at any interest rate, because they don’t know how long they’ll be shut down for or what awaits them when the economy emerges from its coronavirus coma.

“But the government’s preferred option, seemingly, is that those businesses shut and their workers, and even owners, join the dole queues, rather than trying to keep those businesses going and those workers receiving an income.

“And it’s shut-up parliament until August so there can be no debate or alternative proposals put forward by other parties.

“What kind of smoking ruin of an economy will be left by August?”

Early in the “pandemic”, or “plandemic” as sceptics were already calling it, both mainstream and independent commentators queued to attack Australia’s Prime Minister Scott Morrison, whose mishandling of COVID-19 was likely to be picked over by historians for generations to come.

Katharine Murphy, a senior political reporter with Guardian Australia, inside the beltway if anyone was, wrote that as her nephew, a teacher, texted her the previous night, he was still allowed to teach a class of thirty children but if he died from the virus caught there only ten could come to his funeral. If he remarried, only four others could be there; but if he called it a boot camp, ten could come.

Which makes for a clear message; the sense of crisis escalated by late-night press conferences.

“The first rock-solid certainty is 10pm media conferences unveiling fundamental changes to people’s livelihoods and freedom of movement really don’t work. At the risk of being blunt, they need to stop, and stop now, because the chaos risks being counterproductive.

“Tuesday night’s cascading instructions from Scott Morrison’s podium were stay home everyone, but if you have a job, you are an essential worker, so make sure you keep working. Go to school, but don’t go to the food court. Five at a wedding, ten at a funeral, ten at a boot camp, but no yoga.

No waxing, but a hairdresser for thirty minutes is still OK.

“A thread of logic ran through the various delineations — or some of them, anyway — but holding onto that thread was really challenging.

An old sociology professor of his Alex remembered fondly, Allan Patience, piled on the scathing commentary with a piece titled “Australia: The Leaderless Nation”.

“Australia has been leaderless since the federal election last May.

“The Morrison government has shown itself to be woefully unprepared for the policy challenges now facing the country. It is a government that bumbles and reacts, while constantly being on the back foot. And all the prime minister seems capable of is shouty blathering in the parliament, while alternating between his trademark smirk and staring nervously into TV cameras like a rabbit caught in a spotlight.

The “father of the nation”, as some of his acolytes in Australia’s sadly neutered media would have it, had just put hundreds of thousands of people on the dole queues, generating talk of a “new slave class”, and yet there were some commentators who were praising him to the sky. Go figure! Their support, like the public’s, would vanish as rapidly as it came.

Or so Old Alex believed at the time.

A year on from this blizzard of contempt from the nation’s intellectual hoi polloi, Morrison was still doing well in the polls, defying gravity. And Australia had been transformed in front of all our eyes.