The Crime of Not Knowing Your Crime – Ric Throssell Against ASIO 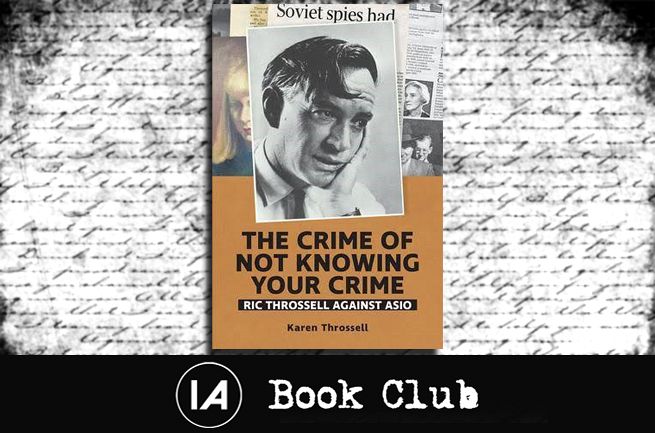 Jim Kable reviews a book by Karen Throssell about the injustice suffered by her father in his life-long struggle to clear his name after being wrongly accused by Vladimir Petrov of being a Russian spy in the 1950s.

FOUR DECADES ago, I had a brief period as an education officer and the chance to be a marker in English for the NSW Higher School Certificate (HSC). Among the novels studied that period was Coonardoo by Katharine Susannah Prichard.

Prichard’s book was hugely controversial for its time – as it still is today – if judged from contemporary understanding. It put into print attitudes and realities of Australian frontier life: cattle stations and the First Nations peoples and lands on which they stood. She was a writer of the Left – of course, she had to be – and a founder member of the Communist Party of Australia in Western Australia. Prichard was married to a Great War Victoria Cross winner, Hugo Vivian Hope (Jim) Throssell, who spoke up against war — of course, he did.

During his presentation about the importance of protecting our remaining local environment, Geoff mentioned being called before The Royal Commission on Espionage, 1954-55. Geoff had been a former World War II Royal Australian Air Force pilot. He and his wife had visited the Soviet Union.

I had a limited understanding of the Petrov thing, being six years old at that time. Vaguely, as I was reaching my late 30s, I knew the Petrov Affair had had something to do with a U.S. McCarthyist “Reds-under-the-beds” paranoia period. Engineered by what historian Manning Clark defined as the nature of the conservatives (the “punishers” and “straighteners” of Australia). Of course, it was! It still applies today — maybe more so.

For a high school history assignment about 1964, I recall writing to the staff at the Soviet Embassy in Canberra who generously sent back a pile of printed material on five-year plans and the ratio of tractors to farming communities and refrigerators and TVs per household.

A dozen years later, my wife and I took a train from Nakhodka to Khabarovsk, then continued via Trans-Siberian Railway to Moscow and Helsinki. History teacher that I was, I wanted to see for myself. Such visits always reveal the lies of politicians, I find.

I am now looking at the front cover of poet and writer Karen Throssell’s moving tribute to her father: The Crime of Not Knowing Your Crime – Ric Throssell Against ASIO. Alongside it, I have Ric’s tribute to his mother Wild Weeds and Windflowers: The Life and Letters of Katharine Susannah Prichard, which it appears I purchased in early 1985 — ten years after it was first published.

It progresses through toThe Royal Commission on Espionage — to which Ric and his wife are called to answer accusations and are fully exonerated. It describes the later continual bullying, deceit and ensuing lack of advancement in Ric’s civil service work by shadowy figures and their ideologically aligned “experts” and journalists – all named – and quite rightly so: Desmond Ball and Gerard Henderson.

The Royal Commission on Espionage, 1954-55, forbade an employer to take any action against an employee just because they had been called as a witness. Be that as it may, there were employers who did not follow this directive.

Highlighted are some examples of the rubbish entered into Australian Security Intelligence Organisation (ASIO) reports, such as that by Phillip Adams — journalist, broadcaster and member of the “Slatterst society”. (Another hand has added‘”Flat Earth Society”?’ further down in his files.)

Ric’s name is variously incorrectly spelt and recorded. While searching his mother’s home, ASIO “visitors” make off with his schoolboy notes on the Peasants’ Revolt. But what might one expect from those who know not history?

Ric was a playwright, actor and writer, a loving husband and father. A pensive hand on the chin and side of his face in the book’s front-cover photograph gives him a kind of Clark Gable look. Karen Throssel says that people reference Gregory Peck regarding her father’s appearance — carrying with it the decency of the Atticus Finch role in To Kill a Mockingbird.

Besides being a gripping and indeed tender read, this book is timely. The paranoia of Cold War times from 70 years ago – anti-democratic, of course – is again being whipped up. And yet another former policeman ignorantly leads the charge into further Cold War rhetoric and surveillance!

The book finishes with an important ten-page essay by Emeritus Professor of History at Victoria University of Melbourne Phillip Deery about Venona, ASIO and Cold War espionage.

‘The Crime of Not Knowing Your Crime – Ric Throssell Against ASIO’ is available from Booktopia for $48.28 (paperback) RRP.

Jim Kable is a retired teacher who taught in rural and metropolitan NSW, in Europe and later, long-term in Japan. He is also a member of the steering committee of political party The New Liberals.