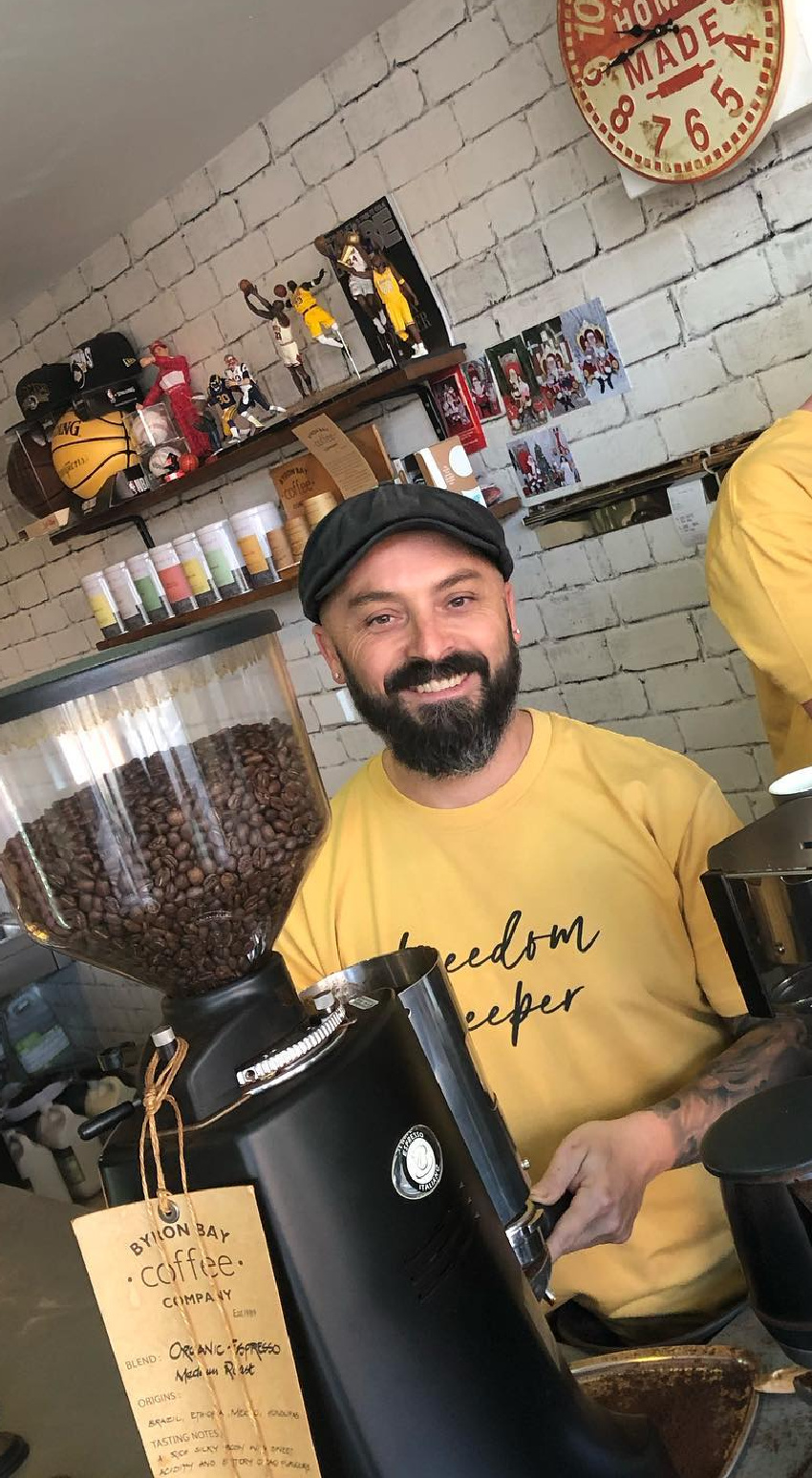 Only a few short years ago a lost in time surfing village, it is now surging ahead as young families flee the nightmare that Sydney has become.

Village Fix is its most successful café, seeing queues of coffee lovers gathering from 6am well into the afternoon.

The owners hit on a winning formula, the best coffee in the state, well prove me wrong, and friendly service.

The owners, Anthony and Natalie Reale, are second generation Italians who are proud to have never received a handout from government as they bring up their three young children.

And like thousands of business owners across the state, they’ve been brought to their knees during the COVID era by government overkill.

For weeks I’ve been making the same joke as I line up for my early morning coffee, “the last surviving small business in New South Wales”.

With the entire state, some eight million people, now enduring a highly controversial lockdown which has wearied the population beyond belief, lasting, this time around, some ten weeks with no end in sight, the joke is becoming all too real. Thousands of small businesses are not expected to reopen, crushed not by the virus but by the politicians and health bureaucrats perpetrating a disgraceful scare campaign on the population.

Put simply: people have had enough.

The Australian government ignored all the cautionary tales emanating from some of the world’s leading tertiary institutions, all warning that lockdowns were a dangerous social experiment which would do more harm than good. The result has been an authoritarian derangement, with military on the streets, unprecedented levels of highly aggressive policing, a dramatic loss of liberties, thousands marching in the streets and uber surveillance at a level previously unimaginable.

Government overreach has destroyed all the nation’s traditional freedoms, from barbeques in the backyard to going to the beach.

And while public servants thrive, even receiving pay rises during the “pandemic”, small enterprises such as Village Fix are bearing the brunt of the authoritarian abuse which has made Australia a laughing stock around the world.

Anthony and Natalie Reale were arrested, charged and fined for not wearing facemasks in their Shellharbour coffee shop two weeks ago.

Village Fix made headlines when NSW implemented mandatory facemasks for posting on Instagram:

While it’s illegal for a business to demand to check an exemption, police targeted the small business.

The pair were issued a $1,000 fine each for allegedly breaching the Chief Health Officers directions.

Police also criminally charged the pair for not wearing a facemask, and Natalie received an additional charge for maskless staff.

Both Anthony and Natalie have valid medical exemptions.

However, their strict bail conditions mean that police may jail them every time they leave their home without a mask.

We’ve added the pair to our Fight The Fines initiative to crowdfund their defence.

In a “name and shame” exercise emanating from the top levels of the NSW Police Force, local media outlet The Illawarra Mercury were notified prior to the arrest of Mr O’Reale, and his picture plastered all over their front page.

As a result the young family received a number of threats, and the tyres of their work van were slashed.

Australians are being turned against Australians.

All those “Covid Safe” signs festooning the entrances of businesses across the state are not signs of cooperation but of coercion.

“Most businesses are drowning,” says mother of three Natalie Reale, who was also arrested.

“When Victoria was in lockdown but we weren’t, nobody could care less.

“Yes, they’re coming to our window with masks, but they’re only wearing them because they don’t want to get a thousand dollar fine. They’re still questioning things. A lot of people have had enough now.

“How are they going to stop people swimming in summer?

“We had a couple of nice days and there were people everywhere, because they have nothing else to do.

“We’re fine, we’re not affected by our stand on anti-discrimination. We have attracted people we wouldn’t have known before the mainstream media dragged us through the ringer.

“We thought we were not going to do very well because mainstream media bagged us, but I have to thank them for connections we wouldn’t have had.

“Now people won’t go anywhere else, they’ll only come to us. And we’ve gained businesses from the other cafes who bagged us because they saw their true colours and were disgusted.”

As Australia has become increasingly communistic in recent years, setting up a business was becoming more and more problematic, even before COVID.

The Reales put everything they had into the business, working long hours, negotiating the blizzard of local council regulations.

Now, with the entire state in a never-ending cycle of lockdowns, almost every small business is on its knees.

“We feel sad, we feel sorry for everyone that is suffering, businesses. All these businesses are essential, they’re people’s livelihoods.

“At first, when COVID appeared, we gained a lot of business from the cafes that closed. Which was good for us. But the families who had lost their jobs, we were just giving them free coffees. We didn’t want to take money off them when we were thriving.

“It’s been disheartening. I’ve felt ashamed to be Australian; Australians have just fallen into this. It’s disheartening to see a country that was so free fall on its knees.”

Natalie says the family feels like they are the subject of inappropriate attention from the authorities, with police sitting outside their home or regularly cruising past the café.

“I feel targeted, like all the other owners of organic cafes and shops, all the health oriented business people they targeted.

“They didn’t target any of the fast food joints.

“There was a lady down the beach the other day fined for walking her dog, because she wasn’t exercising herself, and therefore had no reasonable excuse to be out of her home.

“People are getting fined outside our café for not wearing a mask.

“I’ve seen people fined because they have a mask in their hands. It is ridiculous, absolutely ridiculous, mind blowing. Even talking about it makes my brain fry. How stupid.

“The harassment and intimidation, it is a police state.

“And some of the police don’t want to do it, you can tell.

“But I feel the veil is lifting, and all this corruption will be exposed.

“I believe Australia will follow suit; and scrap it all.

“Restricted in lockdown, people are seeing a lot of stuff, because before, all they were doing was watching government narrative. Now there’s little channels of counter information. A lot of people are questioning what is happening.”

Village Fix is popular with everyone in the area, from yummy mummies to property developers to long time residents, from the rich to the poor, for the simple fact they make the best coffee anywhere in the state.

Their loyal following included the local constabulary, with more than 50 police officers attending the café every day.

They have now been ordered by their “superiors” not to drink at the café or to associate with the owners.

One young police officer is reportedly now under investigation for the “crime” of liking one of the café owners Facebook posts.

That’s a clear example of the signal derangement of authority now consuming Australia and destroying community after community, business after business, liberty after liberty.

Many police do not agree with the vicious diktats deriving from government, a blizzard of constantly changing rules and regulations which has left the population impoverished, confused, disillusioned and increasingly resentful.

Embedded in the communities they serve, they are ill-equipped to act as a paramilitary police force, as they are now being asked to do.

Village Fix is just one of the stories coming out of Australia’s totalitarian derangement.

Day by day, step by terrible step, the situation in Australia gets worse, and worse, and worse. Suffering under lockdowns has become the single devastating experience driving the population to despair.

It has to end.

Australia has become the laughing stock of the world.

And you can bet one thing: the local Shellharbour police miss being able to get a decent cup of coffee.

This piece was written by veteran Australian journalist John Stapleton, who worked for 25 years on two of the country’s leading newspapers, The Sydney Morning Herald and The Australian. A collection of his journalism is being constructed here.