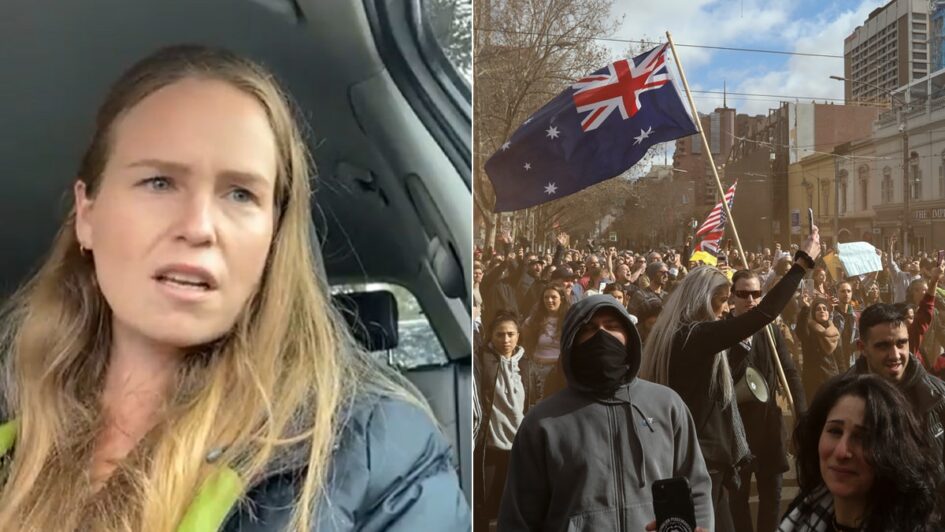 The democratic right to protest has been abolished in Australia, with brutal scenes of suppression and violent clashes between police and demonstrators now part of daily life.

Further wild scenes are expected this weekend, with the entire centre of Melbourne shut down, including public transport, to attempt to stop thousands of protestors who have simply had enough of having their lives destroyed by insane lockdowns which, demonstrably, do not work and inflict enormous harm on the population. As some of the world’s epidemiologists have been warning for the past 18 months.

The brutality of the state is there for all to see.

And with the mainstream media co-opted as nothing but a tool for the worst government in the nation’s history, it has fallen to the outliers to tell the story.

One of the most indefatigable journalists in this blighted era has been Monica Smit of Reignite Democracy Australia.

Now mouldering in a prison cell for performing the traditional function of journalism, that is holding the powerful to account and telling the stories of ordinary people driven in extremus to actions outside their realm or normal modes of behaviour, democracy is dead in Australia.

And those who had ignited this conflict watched from their mansions as the streets burned.

In sneering tones, demonstrating exactly why Australia’s legacy media is failing, Rupert Murdoch’s News Limited records: “A reality TV wannabe who has emerged as Victoria’s most high profile anti-lockdown campaigner has livestreamed what she claims was her own arrest’.”

Ms Smit subsequently refused to sign bail conditions, which included a strict curfew, not posting on social media and not publishing anything which could discourage people from complying with health orders.

Below are extracts featuring Monica Smit from the book Unfolding Catastrophe: Australia by editor of A Sense of Place Magazine John Stapleton, published this month. The book documents the nation’s descent into a classical derangement of authority, unprecedented in the Great Southern Land. It records the rise of citizen journalists and independent media as a direct response to the government’s moronic, heavy handed and counterproductive manipulation of the mainstream media.

History, of course, doesn’t just repeat itself; it is made up of those who leave a record. There was one remarkable aspect of that period, if you were interested in journalism, which was that outside the glossy, breathless daily announcements of case numbers and ever shifting diktats relayed by heavily perfumed television presenters, another story evolved.

Two of the most striking to emerge from the era were Avi Yemini of Rebel News, and Monica Smit of Reignite Democracy Australia, both of whom, whatever you may think about their politics and beliefs, did
fundamental journalistic work the mainstream should have been doing. That is, talking to the people most affected, documenting those determined, courageous and perhaps foolhardy enough to protest.

As easy a way through the maze as any is to tell the story of each of their reporting separately, as different in personality as they were.

Time was collapsing in on itself in any case; the times felt as if we were being visited by our own futures, that entities beyond our ken were already desperately trying to warn us.

Many of the protestors carried mobile phones, filming the multiple abuses of the citizenry this style of policing required. And which was also generating new styles of citizen journalism.

One of those arrested told officers: “Wake up! I know you already know
this is wrong.”

Another suggested the police would have to “answer to the Lord Jesus
Christ”.

Monica Smit from Reignite Democracy Australia reported to camera: “There are a thousand people here. They’re all a little bit scared. Their hearts are thumping. My heart is thumping. This is really bad. Really bad.

It is scary to see the police acting the way they are. We are never going to
like the police again, and that is really dangerous.

“The Australian people are never going to like the police again.”

Despite clear footage of overwhelmingly aggressive police conduct against vastly outnumbered protestors, Victoria Police justified their actions by saying the protest was a “blatant breach” of the chief health officer’s directions.

“We are frustrated that these people continue to put the lives of Victorians at risk,” a police statement said. “While we know the majority of the community are doing the right thing, the behaviour of these selfish few who choose to blatantly ignore the direction will not be tolerated.”

Through all of this, Monica Smit at Reignite Democracy Australia wasn’t going to back down for anybody.
Fast-forward to October (2020) and she was arrested for the third time by
Victorian police.

Surrounded by masked and heavily kitted officers, she declares to camera, speaking over the sound of a police microphone warning that she will be arrested: “We had a group of about ten people. We were socially distanced.”

“We were even social‐distancing. We were doing everything we were supposed to do. I have been arrested twice already.”

Her friend places a protective arm around her and says: “We’ve got no choice now.”

Still speaking to camera, Smit says: “We’ve been told if we stay here, we
will get arrested. Here we go.”

Five police then pull her friend aggressively away, while she says: “Don’t fight it, Morgan, don’t fight it.”

And with a rueful, sad expression plastered across her face says: “I’m next. You can just arrest me, it’s OK.”

A female officer orders her: “Put your hands on your head if you’re willing to leave peacefully.”

“You can arrest me. I’m not putting my hands on my head.

Surrounded by police moving towards her, she repeats: “I’m a journalist. I am protected under federal legislation of implied freedom of political communication. I’m a journalist. I have a work permit. I have an exemption for my mask. Are you sure you want to arrest me?”

As she repeatedly states she has a work permit, an officer orders her to be arrested.

The final seconds of footage sound like a camera hitting the ground, and Smit yelling, “Are you serious?”

Online comments indicated growing community anger: “These police are absolutely horrendous.” “She was willing and they still used awful force on her. SHAME ON THE VICTORIAN POLICE.” “Since when does an arrest of a compliant person permit violent force? Absolute animals.
Sue these people privately.”

Later footage shows Smit, her hands still handcuffed behind her back and surrounded by more than a dozen police, repeatedly demanding: “Tell me what the offence is. Why am I being arrested? I have a work permit.”

Increasingly frustrated and upset, she yells: “Stop! You are ruining the relationship between the community and the police.

“Do you know how bad you guys look? You’re arresting me for working.

“It doesn’t matter what you say, you’re wrong. I’m sorry. I have federal legislation backing me. You’re actually being totally unlawful. What you are doing is 100 per cent wrong. I am a journalist.”

The day begins peacefully enough. “It is a really nice atmosphere,” Monica Smit says to camera. “People are gathering. But we are surrounded. You wonder how long it can last.

“My heart is pumping because two days ago I was arrested three times. There is an emotional response.”

Monica badged her piece: “A battle against evil?”

As if trying to drive in the final nail.

A malevolence; deeply inspired, deeply filmic point in history might have gone undocumented.

You couldn’t help but admire Smit for her absolute fortitude.

You bet the real narratives are laid outside government control.

Her coverage of the November mass arrests was bold, and therefore valuable.

The Reignite Democracy footage starts with another vox pop, in front of a backdrop of police and protestors. “They manipulated us into one corner,” the woman says. “Didn’t offer us water. There were women who wanted to go to the bathroom. This is absolutely evil.”

To camera Monica says: “You know, it is really scary to see them plucking off one person at a time. Really regular‐looking people. It is just scary to see my state being treated like this. I don’t know if there’s a word in the vocabulary which explains how sad I feel about the state of affairs in this state. You look into these people’s eyes; they’re sad too.”

“I feel really sad that the police actually created this situation,” says one protestor.

Monica also interviewed people in the queues waiting to be processed by police, which none of the mainstream media did. “I don’t think I’ve committed a crime,” says one. “I don’t know why I’m being arrested,” says another.

With walls of police behind her, Monica Smit describes a form of crowd policing almost never seen in Australia: “The ones in black, they’re the ones that surround you and arrest you and do all that. What they do, it’s like a diamond shape, they come in and they grab one person at a time. There’s seven or eight of them. One’s got your arm, each arm, one’s got your neck. They pull your head into their chest. The others are there to literally stop the cameras from seeing what’s going on.

“They yell ‘don’t resist, don’t resist’, and give you a little jab. Every time you get a jab, you
move, and it looks like you’re resisting.

“Someone’s passed out here. They’ve probably passed out because of the
emotional trauma of being surrounded by so many police.”

“It is intimidating. I do feel like a criminal,” another young woman says. “When you have two really big men standing next to you, holding you against your will, it is intimidating. It’s not nice. There were cops everywhere. I wasn’t really going to start an argument because I was quite upset.

“When I was down there I wasn’t in a group bigger than ten. We all got ushered in by the police. We got stuck. I said to them multiple times, ‘Guys, are we being held against our will? Can we leave? Nobody would respond to us. ‘Guys, this is deprivation of our liberty. Let us go!’ Nobody
would answer us.”

John Stapleton is one of Australia’s most experienced general news reporters, having worked on The Sydney Morning Herald and The Australian for 25 years. He is the founder of A Sense of Place Magazine.

Unfolding Catastrophe: Australia is available at all major online outlets, including Booktopia, Australia’s largest online bookstore, Amazon, the world’s largest marketplace, Barns & Noble and others. Your local bookshop, if it ever reopens, can also order the book in for you.