The 50 Beautiful Australian Plants at Greatest Risk of Extinction 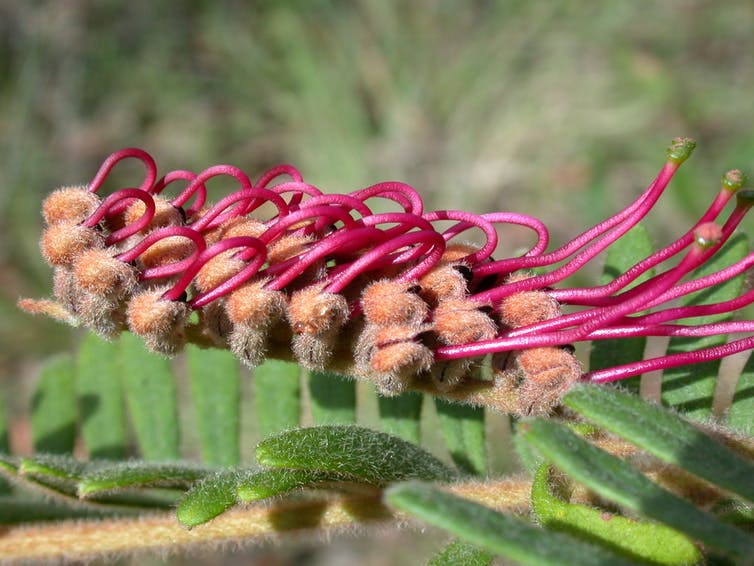 As far as odds go, things don’t look promising for the slender-nerved acacia (Acacia leptoneura), a spiky plant with classic yellow-ball wattle flowers. With most of its habitat in Western Australia’s wheat belt cleared for agriculture, it was considered extinct for more than 160 years.

Now, just two plants are known in the world, and they’re not even in the same place. This species is among many Australian plants that have come perilously close to extinction.

To help prevent the loss of any native plant species, we’ve assembled a massive evidence base for more than 750 plants listed as critically endangered or endangered. Of these, we’ve identified the 50 at greatest risk of extinction.

The good news is for most of these imperilled plants, we already have the knowledge and techniques needed to conserve them. We’ve devised an action plan that’s relatively easy to implement, but requires long-term funding and commitment.

There are 1,384 plant species and subspecies listed as threatened at a national level. Twelve Australian plant species are considered probably extinct and a further 21 species possibly extinct, while 206 are officially listed as critically endangered.

Australian plants were used, managed and celebrated by Australia’s First Nations people for at least 60,000 years, but since European colonisation, they’ve been beset by a range of threats.

Land clearing, the introduction of alien plants, animals, diseases, and interruptions to ecological processes such as fire patterns and flooding have taken a heavy toll on many species. This is particularly the case in the more densely populated eastern and southern parts of the continent.

Things aren’t improving. Scientists recently compiled long-term monitoring of more than 100 threatened plant species at 600 sites nationally. And they found populations had declined on average by 72% between 1995 and 2017.

This is a very steep rate of decline, much greater than for threatened mammal or bird populations.

Many species listed as threatened aren’t receiving targeted conservation action or even baseline monitoring, so an important first step in preventing extinctions was identifying the species at greatest risk.

Thirty of the species in the plan have fewer than 50 mature individual plants remaining.

And 33 are known only from a single location, such as the Grampians pincushion-lily (Borya mirabilis), which occurs on one rocky outcrop in Victoria. This means the entire population could be destroyed by a single event, such as a major bushfire.

So how can we protect them?

Some of the common management actions we’ve proposed include:

Another common issue is lack of recruitment, meaning there’s no young plants coming up to replace the old ones when they die. Sometimes this is because the processes that triggered these plants to flower, release seed or germinate are no longer occurring. This can include things like fire of a particular intensity or the right season.

Unfortunately, for some plants we don’t yet know what triggers are required, and further research is essential to establish this.

Now we need the political will

Our plan is for anyone involved in threatened flora management, including federal, state, territory and local government groups, First Nations, environment and community conservation groups, and anyone with one of these plants on their land.

Plants make Australian landscapes unique — over 90% of our plant species are found nowhere else in the world. They’re also the backbone of our ecosystems, creating the rich and varied habitats for our iconic fauna to live in. Plants underpin and enrich our lives every day.

Now we have an effective plan to conserve the Australian plants at the greatest risk of extinction. What’s needed is the political will and resourcing to act in time.

Read more: Undocumented plant extinctions are a big problem in Australia – here’s why they go unnoticed