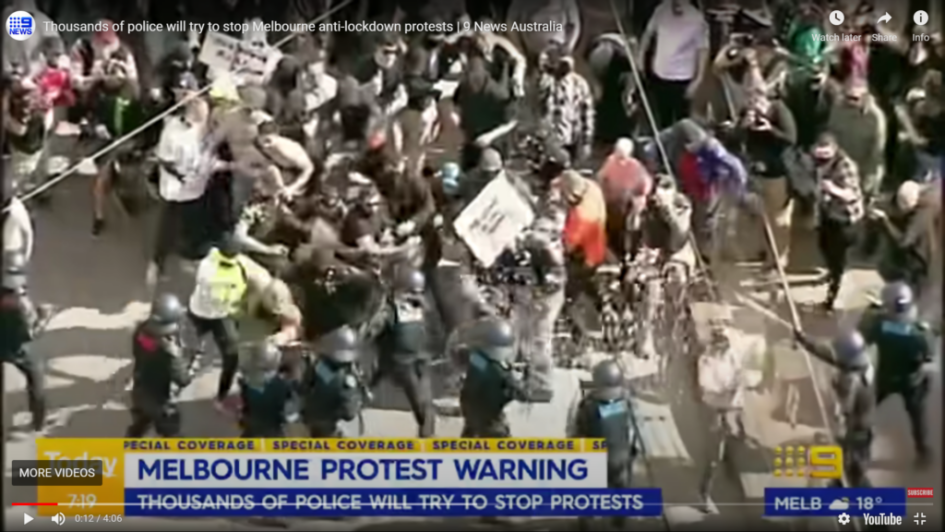 Last September we saw some of the most violent demonstrations and mass arrests ever seen in Australia.

A year on, the protests have got larger, the heavy handed police response has made us the laughing stock of the world, and there appears to be no end in sight for this national derangement.

Protests are planned across Australia today.

Here is some of the coverage, presaging a day like no other.

Public transport in Central Melbourne has been shut down and thousands of police deployed to stop protestors.

Construction workers have blocked off major roads in Melbourne in protest of the new coronavirus restrictions placed on tea rooms.

The decision for Victoria Police to shut down Melbourne’s entire public transport system this weekend in an attempt to stop anti-lockdown protests has been marred by controversy, with people labelling it an “extraordinary move by a democratic government”.

Victoria Police Commissioner Shane Patton announced the shutdown yesterday afternoon, saying all public transport into and within Melbourne’s CBD would be stopped between 8am and 2pm on Saturday.

Buses will bypass the city and trams and trains will stop short of the CBD, with police on hand to ensure people are following public health directions and not planning to enter town.

“Anyone who’s planning to come in, it is an illegal gathering and we’ll be doing everything we can to prevent that gathering,” Mr Patton said yesterday.

“And if people do get to make it into the CBD for that gathering, we’ll be enforcing that. We’ll be doing everything we can to prevent access to the city.”

Those entering the city risk $5500 fines while $1800 fines also apply for people outside their 5km zone.

The decision to lock down the city, and stop what anti-lockdown protesters are calling a “worldwide rally for freedom”, comes less than a month after a similar protest put nine police officers in hospital.

The August 21 protest – that drew more than 4000 people to Melbourne’s CBD – was marred by violence as police and demonstrators clashed.

Victoria Police said it was one of the most violent demonstrations in the past 20 years, with nine police officers hospitalised and dozens more injured.

Activists plan to protest in multiple cities across Australia from 12:00 Sept. 18 to denounce government policies to curb the spread of COVID-19. Organizers have announced the following protest locations:

Activists may also hold protests in other cities. Gatherings are likely at government buildings and public squares. Participation in larger protests may involve thousands of people.

Security personnel will likely deploy heavily to monitor the protests and may attempt to enforce COVID-19 gathering restrictions. Clashes between protesters and police are possible. Security forces clashed with anti-lockdown demonstrators during a gathering in Melbourne Aug. 5 and 21 and have arrested participants at similar protests elsewhere. Localized transport disruptions are possible, especially if protesters march along roadways.

MELBOURNE MELTDOWN THE BEST OF 2020