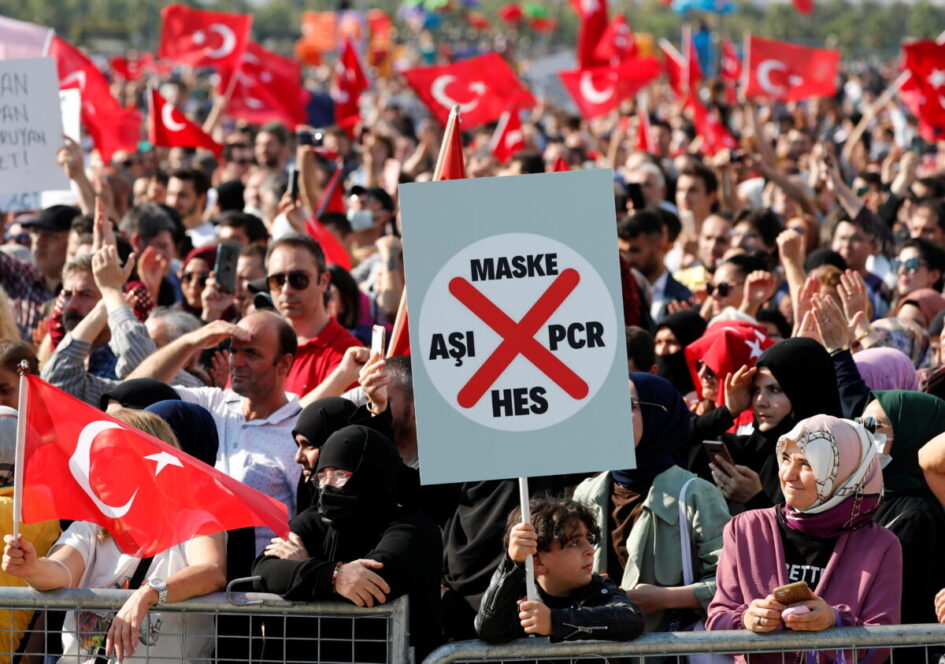 After 18 months, the authoritarian derangement which has gripped so many countries during the Covid era has hit a brick wall, perfectly illustrated by the Paris demonstrations over the weekend where thousands of protestors and thousands of police faced each other in scenes of high confrontation.

Mounting anxiety and mounting distrust from abused populations is now leading into a deep well of pain; a kind of national psychotic breakdown.

And many people are now asking: How much longer can this last?

The only thing more alarming than the current situation is that it could get a damn sight worse.

And the most amazing thing of all: governments are not stepping back from the abyss they themselves created.

Thousands of people gathered in the Maltepe district of Istanbul in Turkey on Saturday to protest against COVID-19-related restrictions, including vaccine mandates, saying the restrictions infringe on their rights.

Nearly 3,000 people attended the rally, which was permitted by the governor’s office and started at 2 p.m. local time, Turkish news agency Diken reported.

Demonstrators organized the protest in the wake of new measures that passed government and will go into effect starting Sept. 13—requiring proof of vaccination or a negative COVID-19 test for all users of intercity planes, buses, and trains, as well as for those attending large events such as concerts or theater performances.

According to videos and photos of the rally, a large crowd of people listened to speakers while holding placards that read: “The Turkish people will not become vaccine guinea pigs,” “Freedom is not free. We are ready to pay for it,” “My body, my decision,” and “The health ministry is not a vaccine marketing office.”

Clashes break out at a demonstration in the French capital against the coronavirus ‘health pass,’ a few days before the mandatory vaccination of health professionals comes into force.

The protests, which went for more than six hours and passed by some of the most famous landmarks of Paris, showed one of the world’s most beautiful cities as it had been rarely seen.

Russia Today streamed the entire event live. Six and a half hours of the protest can be watched here; leaving no doubt at all that we are now at a pivotal point in history, and in the Covid era.

Unmute Us! Event sector to protest against Covid policy across the Netherlands today

The events sector will take to the streets in various cities again on Saturday under the name Unmute Us. This is because the Cabinet has not yet made any concrete commitments in response to the earlier protest on August 21, which generated headlines worldwide. The sector is calling on the Cabinet to adjust its pandemic response policy to allow events, such as festivals, to continue immediately.

The demonstrations begin from 2 p.m. in the cities of Amsterdam, The Hague, Eindhoven, Enschede, Groningen, Leiden, Maastricht, Tilburg, Nijmegen and Utrecht. Initially, there were also protests planned in Rotterdam, but the demonstrators there were asked to join the action in The Hague.

After the previous protest, Unmute Us representatives had a meeting with several members of the caretaker Cabinet, together with the Alliantie van Evenementenbouwers, a group representing all levels of stakeholders involved in sports, culture and entertainment. Unmute Us states that the ministers indicated that they would “include their arguments with their decision-making [before] the next press conference on September 14”, but that this was not a firm commitment. Because of that, they say there is nothing holding them back from protesting again.