The Daily Dance of Flowers Tracking the Sun 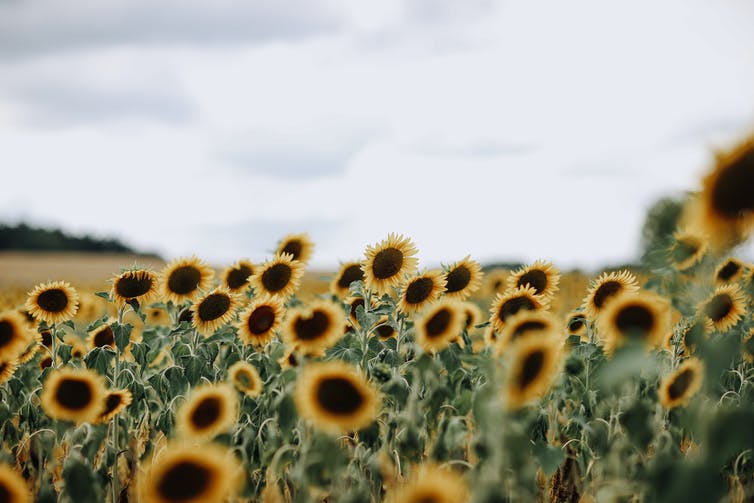 By Gregory Moore, University of Melbourne.

When I was a child, I was intrigued by the Queensland box (Lophostemon confertus) growing in our backyard. I noticed its leaves hung vertical after lunch in summer, and were more or less horizontal by the next morning.

This an example of heliotropism, which literally means moving in relation to the sun. We can see it most clearly as spring arrives and various species burst into flower — you might even get the feeling that some flowers are watching you as they move.

Many of us probably first got to know of heliotropism at home, kindergarten or primary school by watching the enormous yellow and black flowering heads of aptly name sunflowers, which moved as they grew.

These flowers track the course of the sun spectacularly on warm and sunny, spring or summer days. Sometimes they move through an arc of almost 180⁰ from morning to evening.

So with the return of sunny days and flowers in full bloom this season, let’s look at why this phenomenon is so interesting.

The mechanics of tracking the sun

A number flowering species display heliotropism, including alpine buttercups, arctic poppies, alfalfa, soybean and many of the daisy-type species. So why do they do it?

Flowers are really in the advertising game and will do anything they can to attract a suitable pollinator, as effectively and as efficiently as they can. There are several possible reasons why tracking the sun might have evolved to achieve more successful pollination.

By tracking the sun, flowers absorb more solar radiation and so remain warmer. The warmer temperature suits or even rewards insect pollinators that are more active when they have a higher body temperature.

Read more: Why there’s a lot more to love about jacarandas than just their purple flowers

So, the flowers are clearly moving. But how?

For many heliotropic flowering species, there’s a special layer of cells called the pulvinus just under the flower heads. These cells pump water across their cell membranes in a controlled way, so that cells can be fully pumped up like a balloon or become empty and flaccid. Changes in these cells allow the flower head to move.

When potassium from neighbouring plant cells is moved into the cells of the pulvinus, water follows and the cells inflate. When they move potassium out of the cells, they become flaccid.

These potassium pumps are involved in many other aspects of plant movement, too. This includes the opening and closing of stomata (tiny regulated leaf apertures), the rapid movement of mimosa leaves, or the closing of a fly trap.

In 2016, scientists discovered that the pin-up example of heliotropism — the sunflower — had a different way of moving.

They found sunflower movement is due to significantly different growth rates on opposite sides of the flowering stem.

Everything is then set for the whole process to begin again at dawn next day, which is repeated daily until the flower stops growing and movement ceases.

Read more: The secret life of puddles: their value to nature is subtle, but hugely important

While many people are aware of heliotropism in flowers, heliotropic movement of leaves is less commonly noticed or known. Plants with heliotropic flowers don’t necessarily have heliotropic leaves, and vice versa.

Heliotropism evolves in response to highly specific environmental conditions, and factors affecting flowers can be different from those impacting leaves.

For example, flowers are all about pollination and seed production. For leaves, it’s for maximising photosynthesis, avoiding over-heating on a hot day or even reducing water loss in harsh and arid conditions.

Some species, such as the Queensland box, arrange their leaves so they’re somewhat horizontal in the morning, capturing the full value of the available sunlight. But there are also instances where leaves align vertically to the sun in the middle of the day to minimise the risks of heat damage.

It’s easy to think of plants as static organisms. But of course, they are forever changing, responding to their environments and growing. They are dynamic in their own way, and we tend to assume that when they do change, it will be at a very slow and steady pace.

Heliotropism shows us this is not necessarily the case. Plants changing daily can be a little unsettling in that we sense a change but may not be aware of what is causing our unease.

As for me, I still keep a watchful eye on those Queensland boxes!

Read more: It is risen: the story of resurrection ferns and my late colleague who helped discover them in Australia

Other stories by Gregory Moore in A Sense of Place Magazine:

A Sense of Place Magazine, flowers, follow the sun, Gregory Moore, heliotropism, The Daily Dance of Flowers Tracking the Sun