Resurrection Ferns And Their Discovery In Australia 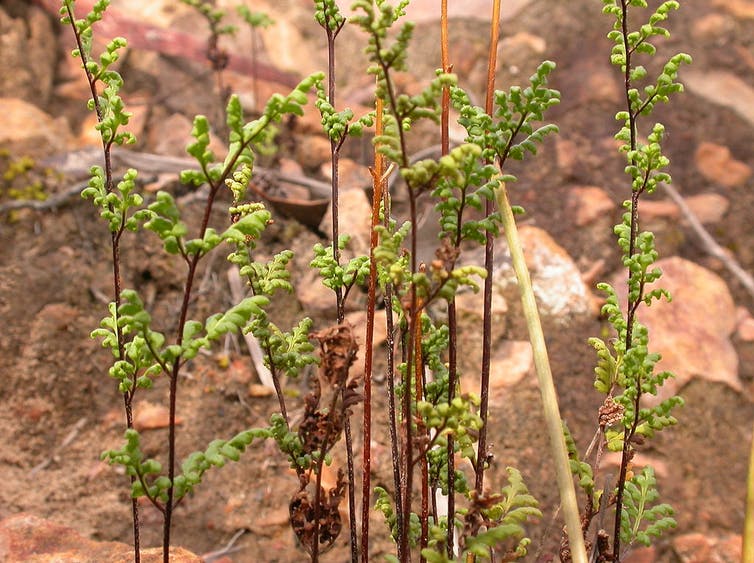 By Gregory Moore, The University of Melbourne

One afternoon in the late 1970s, my colleague and fellow student Helen Quirk handed me a brown, shrivelled fern frond. It appeared to be dead, and was so dry that when I crushed it between my fingers it disintegrated into a powder.

We placed another piece on a petrie dish and added water. Almost immediately, the piece began to unfold and, as though in time-lapse photography, it appeared to re-green. Within a few hours it looked like a normal, delicate fern.

This was my first encounter with a resurrection fern: remarkable plants that look dead and dry, but when provided with the right conditions — often just the addition of water — rapidly spring back to life.

Helen died a few short years later in 1982, but her botanical legacy of classifying and exploring the ecology of Australian resurrection ferns lives on. The resurrection fern she showed me turned out to be a new species, and her scientific description of it hooked me immediately. I was fascinated to discover more.

The remarkable ancient history of ferns

Plant enthusiasts often think of ferns as being simple and delicate plants from an earlier evolutionary time. Ferns predate all flowering and cone-bearing plants, often by millions of years.

Their long evolutionary history has meant similar ferns are found on many continents. This is because they once existed on the supercontinent Pangaea around 300 million years ago, before it broke apart into Gondwana and Laurasia and its various components began the great continental drift to their current positions.

So, while ferns are indeed ancient, they are certainly not simple or delicate.

Many people are entranced by their resilience — just watch how they spring back to full and gloriously green canopies after bushfires.

They also have intricate anatomical and morphological structures, and their evolutionary histories are often complex and poorly understood. This is perhaps, in part, because they have continued to evolve and change right up to the present era.

Time lapse of a resurrection fern growing on an oak tree, where its dried-out fronds unfurl and turn green.

The similarity of ferns in different parts of the world has provided fertile research ground for fern taxonomists trying to accurately distinguish one species from another. Sometimes they discover that ferns on different continents are a single species. On other occasions, ferns that look remarkably alike are distant relatives.

This has been the case with resurrection ferns, members of the genus Cheilanthes. At present there are about 15 known species of Cheilanthes in Australia.

There are many plants from unrelated families that fit the description of resurrection plants, which suggests their adaptation has evolved on several separate occasions in response to arid environments.

Some can go without water for up to seven years and return to normal from a fully desiccated state within two days.

The fact that a number of ferns and other primitive plants are resurrection plants is a reminder that the ancient earth they evolved in could be a very inhospitable place. This was long before plants helped make earth the liveable planet we know today.

How resurrection plants tolerate such low internal moisture levels has wider biological and medical implications, too.

We’re learning from these plants how to improve drought tolerance in crops. And understanding their tolerance of desiccation has been used to improve methods of storage and transport of vaccines and human blood products.

The notion of a resurrection plant growing under dry desert conditions was not unfamiliar to me in the 1970s.

However, the idea of ferns being a resurrection plant seemed distinctly odd, as they are usually water loving and dependent. Resurrection ferns, on the other hand, can remain in a desiccated state for months or even years before they resume growth.

The specimen of Cheilanthes I got to know came from the Grampians in Victoria. Helen and botanist Professor Carrick Chambers named it Cheilanthes austrotenuifolia, or “rock fern”.

As its common name suggests, these small, delicate-looking ferns grow in exposed rock crevices, often in inaccessible places. They only occur in the southern parts of Australia.

Rock ferns can reach about 45 centimetres high and their fronds will be 25cm or less in length. Like many ferns, such as bracken, they grow from an underground rhizome (stem).

It can be quite disconcerting when the fronds die back and disappear completely over summer, only to reappear again when it rains in autumn.

Rock ferns are among the first plants to recover after severe drought and, while they’re really tough and hardy, they’re quite particular about where they grow.

This can be frustrating for those trying to propagate and grow one. You can grow it from pieces of rhizome and from spores, but it isn’t always easy.

This means opportunities to play with a resurrection fern don’t come along all that often. So, with Helen, a number of us disappeared into the laboratory to investigate further.

Our laboratory tests showed it was already photosynthesising. The transition from powder to getting on with living was complete.

Years ago, I planted a piece of C. austrotenuifolia rhizome with a single frond in the heavy clay soil of our garden, between a couple of sizeable basalt rocks. It was never really happy and over its first summer, it disappeared.

Imagine my surprise when about five years later, a couple of ferny fronds appeared. It was back. I immediately thought of Helen.

Over the summer, the fronds died back again and it was gone, until eight years later when another couple of fronds appeared.

It is now about 10 years since we last glimpsed a frond. I am not hopeful about its survival, but you never know.