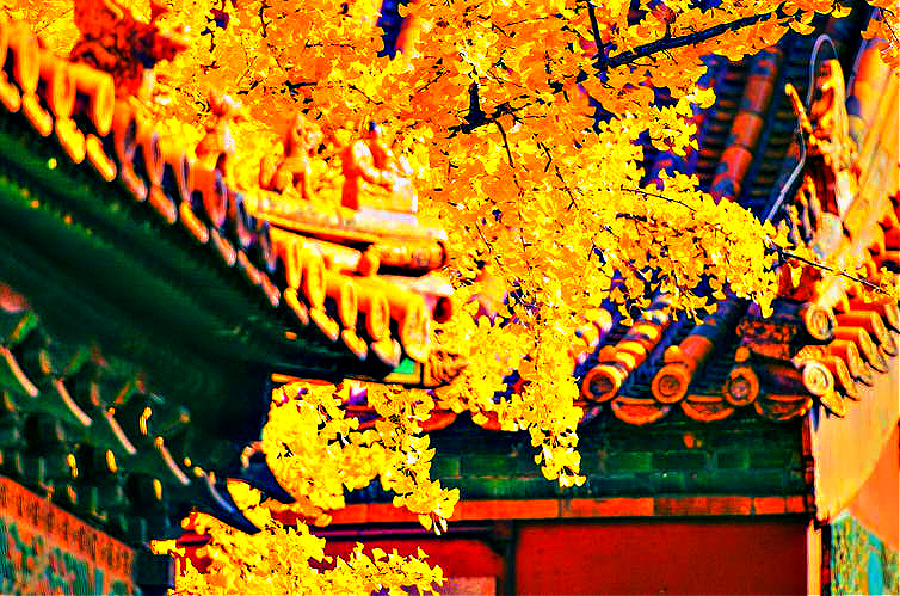 Gregory Moore, The University of Melbourne.

Most of us are captivated by the thought of a “living fossil”, which is any organism that appeared millions of years ago in the fossil record and survives today, relatively unchanged.

The maidenhair tree, Ginkgo biloba, ticks all the boxes of this definition. The genus Ginkgo is well known in China and Japan where it has special significance in Buddhism and Confucianism, and first became known to European botanists in the late 1600s.

Today, ancient ginkgo fossils can be found all over the world, some of which are almost 300 million years old – a time when dinosaurs roamed the planet. Let’s delve further into what makes this species so remarkable: from its ability to survive nuclear bombs, to its vomit-smelling seeds, to it’s beautiful autumn display.

The ancestral ginkgo evolved so long ago it spread across the super continent Pangaea and was present in both the northern component (Laurasia) and the southern part (Gondwana, which included Australia) when the continents fragmented.

As a result there are fossils, Ginkgo australis, from the cretaceous period about 65-140 million years ago in the Koonwarra Fish Fossil beds near Leongatha, Victoria. There are also much more recent (about 20 million years old) fossils from Tasmania.

Ginkgo biloba has an intriguing appearance. It can grow up to 35 metres tall with a spreading canopy, and its leaves are a wonderful fan shape, often with a little cleft or notch.

As you might imagine for a genus dating back almost 300 million years, the maidenhair tree is both hardy and resilient, tolerating a wide range of soil and climatic conditions.

The tree is known to be very long-lived and some specimens at temple sites are thought to be over 1,000 years old which, in part, explains the mystique associated with the species.

They have a lignotuber – a modified stem at the base of the trunk containing lots of buds – which allows for sprouting at ground level and multiple stems. The lignotuber allows for rapid recovery from serious environmental stresses such as fire and defoliation.

In fact, six trees not only survived the bombing of Hiroshima, but recovered quickly, are healthy and growing still. Their survival showed the resilience of the ginkgo and the trees became an important symbol that recovery from disaster was, indeed, possible.

Australians can empathise with this as the vibrant re-sprouting of trees after bushfires often plays a similar symbolic role.

Things continue to get interesting when you consider there are separate male and female trees; a relatively rare feature in modern trees. The male reproductive structures have mobile sperm that swim to the ovule for fertilisation, which is considered a primitive or ancient characteristic.

If fertilisation occurs, the female tree produces a seed that resembles a fruit. The seed’s soft fleshy layer is malodorous, with people often describing it as being revolting or smelling of human vomit.

A pair of female maidenhair trees was planted outside the entrance to the Old Geology building at the University of Melbourne in the 1920s. Since then, staff and students have had to use the side entrance when trees held seeds. This will probably continue for decades to come.

Likewise, I know of a couple of female trees that were planted outside the entrance to a major bank branch in Hawthorn, Victoria. It was considered karma by disgruntled customers, until their sudden removal by a desperate manager.

The male tree doesn’t smell but produces pollen, which has been known to cause allergies, so be wary of which sex you plant and where you plant them.

The seed’s strong scent has been linked to its dispersal, as many animals are drawn to strong, even rancid smelling fruits. There’s little evidence as to which animals or birds eat ginkgo seeds today, but there has been speculation the seeds may have been eaten by dinosaurs.

Ginkgos coexisted with dinosaurs for millions of years. It’s easy to imagine a huge herbivorous dinosaur munching on tall maidenhair trees. Sadly, there’s no evidence of gingko seeds in fossilised dinosaur droppings. But for those who are captivated by the connection of a living fossil and dinosaurs, perhaps that fossil is still to be found.

Ginkgo biloba has been cultivated for more than 3,000 years, and so whether it grows naturally in the wild is uncertain. Even in China, it grows most often in homes and temples, and there’s very little genetic diversity within the plants suggesting they’ve been grown from cuttings.

The tree has been so widely planted it now occurs in major cities and botanic gardens around the world. In Australia, many of us live within a few kilometres of a recent planting.

Many of the ginkgo trees planted in urban landscapes are males grown from cuttings. But there are different cultivars available from nurseries, with some being all female varieties that are highly prized for their brilliant yellow autumnal colour.

Apart from allergenic pollen and vile smelling seeds, Ginkgo biloba can have another very annoying or perhaps frustrating habit for gardeners. Young plants can grow very tall before their side branches begin to grow and develop. This form of growth, called bolting, is considered an adaptation to stressed environments, but it’s little consolation when you’ve been growing a gingko for 20 years, it’s over 6m tall and still looks like a bean pole.

You have to be patient with slow-growing, long-lived trees, but they’re worth the wait! They rarely, if ever, have pest or disease problems, they are hardy and, despite being cultivated in Europe and North America for centuries, have never become weedy.

They may well be described as living fossils, but they are in fact a resilient genus of modern plants that can cope with whatever the environment has thrown at them for over 300 million years.

They are the epitome of great survivors and I would not be betting against their chances of surviving for millennia to come.

OTHER STORIES BY GREGORY MOORE IN A SENSE OF PLACE MAGAZINE