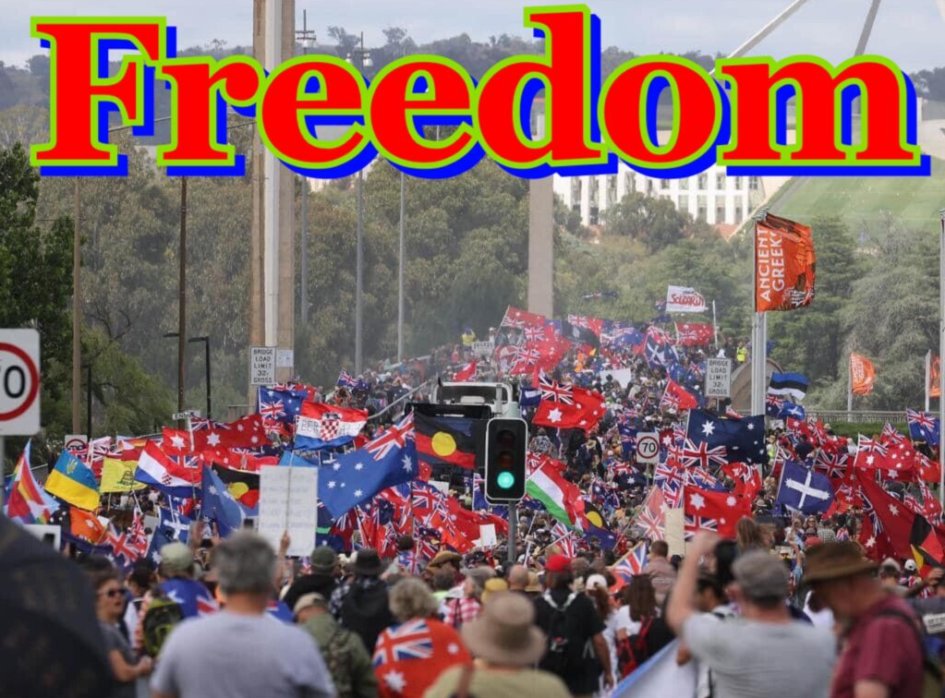 The humanitarian crimes committed by Australian authorities against their own citizens, beginning in early 2020, will live on in infamy, but it is the people themselves who create a nation’s history.

On the 12th of February 2022, the largest gathering of Australians in the nation’s history marched on the National Parliament in Canberra to protest the totalitarianism of the Australian Government, chanting “Sack Them All, Sack Them All”.

To purchase from Angus and Robertson go here:

Crowd numbers are notoriously difficult to calculate and prone to distortion.

Estimates varied between demonstrably incorrect official figures of 4-10,000, up to three million. Many estimates settled around the 1.4 million figure.

Whatever the number, no politician, intelligence agency, police force or political strategist in Australia failed to notice that a massive number of people marched on the nation’s capital, with a remarkable amount of good cheer, jubilance and camaraderie; character traits which the nation’s leaders had failed to show in the previous two years of authoritarian derangement.

Between 2020 and 2022 Australia was gripped by a madness which was spiritual, administrative, political, social and judicial in its dimensions.

This humble record can only do a little to record this seismic shift, a profound turning point in the history of the nation.

In the preceding two years many Australians stood up against the rising tide of tyranny, only to find themselves pepper sprayed, bashed by police in repressive, dictatorial abuses which made headlines around the world, imprisoned, fined, thrown out of their jobs, socially marginalised and ridiculed in the mainstream media.

Across the preceding two years there had been one remarkable demonstration after another, attracting at first tens, then hundreds, then thousands, then hundreds of thousands of participants.

But if the nation’s government manipulated mainstream media was to be believed, they numbered only a few, and all were either nut jobs or conspiracy theorists.

Nothing could have been further from the truth; but the protestors, from all walks of life, were given no credit and no voice – until they found their own.

John Napper of Action in Focus Photography provided a large number of the images.

Janaya Markwell also provided several photographs, leant assistance on the media desk at the centre of the Epic campground, and has proved herself to be one of the most significant documentors of Australia’s Freedom Movement.

Veteran journalist and author of Unfolding Catastrophe: Australia John Stapleton wrote the text and acted as project editor and publisher.

Many people helped to make this project possible and we would like to thank them all.

And for all the people who remain anonymous, who donated food, money, toiletries, good will, hard work, time and passion, who cared for each other in the greatest display of common humanity modern Australia has ever seen, who leant a hand and helped out at every opportunity they could, the nation itself owes you an enormous thank you.

To see excerpts published in A Sense of Place Magazine see the links below.

ONE
A TIME FOR ALL TIME

TWO
FROM ALL THE LANDS WE COME

THREE
THE FULCRUM POINTS OF HISTORY

FIVE
WE WILL WASH AWAY TYRANNY

SEVEN PART ONE
THE MEEK SHALL INHERIT THE EARTH

EIGHT PART ONE THE GREAT MARCH