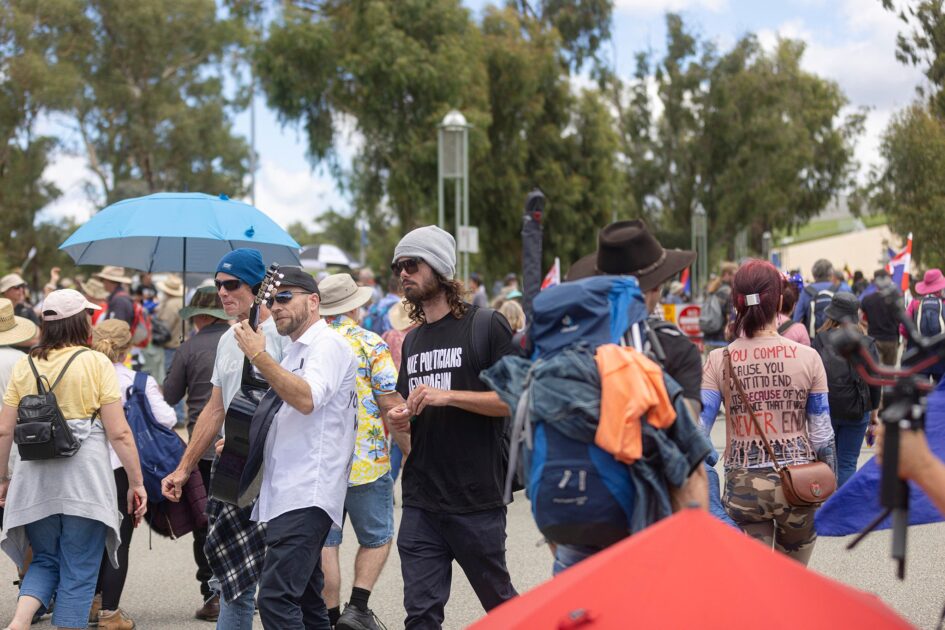 This is Part Two of Chapter Seven, The Meek Shall Inherit The Earth. The book will be available in the coming weeks. The series so far can be accessed at the bottom of this piece.

The government dismissed these people at their peril.

One participant passionately argued that we should all learn from nature and Australia’s stunning landscapes, that we should return the nation to its ancient spirits and rename the Constitution “The Land of Magnificent Trees”.

There was a lot of that sort of thing. And it was very sincerely felt.

Entire suburbs of tents spread out from the showground’s central pavilion, neatly lined in rows, with barbeques and beds and chairs. The atmosphere was invariably joyful.

Australians love of camping and the outdoors was now serving them well.

For some it was an intensely spiritual event; as if an Imperial Warship inhabited by supranatural beings existing outside of time, those entities the humans call Gods, had settled in the sky above the campground; an airborne megalopolis, a giant and extraordinary swirl of out-of-this-world intelligences; as if there had been nothing like it since the Sermon on the Mount and the story of the Loaves and Fishes.

However various inflamed imaginations may have interpreted it; on the ground there was certainly a fair bit of loaves and fishes going on, as makeshift kitchens staffed with volunteers sprang up to feed thousands of people every day.

As if out of nowhere, the right people appeared at the right time, from chefs to dishwashers, kitchen assistants to food servers, while at the same time carload after carload appeared delivering supplies and donations, some travelling many miles to do so.

While Canberra’s taxpayer funded elites sniffed and condemned the members of the working class now on their doorsteps as “bogans”; many others found it in their hearts to deliver supplies, rolling up with boxes of fruit and vegetables, trays of sausages and steaks and legs of ham; and massive numbers of supplies, including shampoo, soap, toothbrushes and toilet paper.

Michael Griffith of Café Lockdown wrote: “I stood at the front gates of Epic Park as vehicles kept arriving from all over Australia. These vehicles were flying Australian flags, both red and blue and many of these flags were upside down, and or their vehicles’ windows were covered in slogans. Hands off our kids. End the mandates. Freedom.

“The day before the big march, this constant arrival of Australians became a tsunami. All day Epic Park’s main winding road was a traffic jam of cars full of people who had come here, from every corner of the country, to demand that the government return their freedoms and leave their children alone.

“As soon as they passed through the gate, a crowd lining the avenues of Epic showground cheered and then the vehicle’s occupants cheered back. They had made it. They were here, the Anti Vax Capital of Australia. The long, long drive had been well and truly worth it.

“Everyone who was here, these witnesses, kept stating that they had never experienced anything like this before. Many of them old people, and many of these were teary with joy, assured us that nothing like this had ever happened before. Not in Australia.

“This was a Gathering of Guardians, the defenders of freedom. This organic, nationwide, communal protest was the birth of a new nation.”

Brent, 34, who owns a construction business from Western Australia, describes himself as a “vaccine survivor”.

“I spent 20 days in hospital and I was told the whole time it was anxiety,” he says. “My wife and children are at home in WA.

“I want to go home as soon as possible. And that’s when we achieve our goal.

“At this point time I can’t legally get home. I’m doing this for my kids, and if I didn’t have the adverse reaction I wouldn’t have woken up and my children would be vaccinated.

“When I left WA I was eligible to return because I was double vaxxed. As soon as you are due for your booster, you have to have it, which was the day I arrived in Canberra.

“My children will only be vaccinated over my dead-vaxxed body.”

When last spotted, Brent was camping with a group of some 350 cars from WA, none of whom could return to their home state.

Peter, 50, a support disability worker who lost his job after being accused of talking “negatively” about Covid, said: “I am single dad. I have to pay the mortgage. As soon as the people in my workplace discovered I was not double vaccinated, even though I had a medical exemption, they turned on me and went to management.

“I went to one of the large protests, and asked one of my fellow employees if they would cover me for an hour to allow me time to get back to work. I was accused of talking about Covid again, because I replied honestly when she asked if I was going to a rally.

“I was given a first and final warning; and after some bull dust had a fellow employee turn on me. That’s what I’m dealing with. I was suspended. When I went to the Australian Services Union they told me to fall on my knees and beg for my job.

“It has been therapy for me, coming to Canberra, sharing my stories with people in the same situation. It’s been very sad meeting with other fathers, our role is to protect our children, and every father I have spoken to here have had children turn against them over this.

“It is heart breaking for all of us.”

Kim Ward, 59, a former aged care worker from Redcliffe in Brisbane, had been at the camp since the first of the Convoy.

“It started about 10am. I just travelled down in a car with my girlfriend. There were about 60 of us outside the front of Parliament House, where we camped overnight.

“I thought, we’re going to be screwed here. There’s just not enough of us.

“Then they just started pouring in. We stayed in the car park the first night; the police moved a lot of us on. They weren’t violent; but they were arrogant. You wouldn’t want to approach them.

“The mood was great, even though there weren’t many of us. There were people from all over.

“Now, there’s probably more than 200,000 in this camp alone. It gives you hope. You don’t feel so alone now, when you see how many people are fighting. I am amazed by the whole lot of it, these people fighting for their children. To be honest, I am so happy because we’ve made them nervous. We haven’t seen much light.”

Maria Pilar, 67, from Byron Bay in northern NSW, was part of the Convoy to Canberra since the very first day. She spent much of her time working out of a temporary office helping others.

“I am deeply concerned for the children,” she said in her exuberant, heavy accent. “I come from an original sovereign tribe, the Mapuche from central Chile.

“We have never given away our sovereignty and our freedom.

“I was amazed from the beginning at the quality of the people I was with, the clarity and their skills. How well and how quickly we self organised. It is a spontaneous community.

“Now my heart is just full of joy to see so many people coming together in unity and cooperation.”

Perry Thorp, 20, from Melbourne, the world’s most locked down city, a Bible College student, found a purpose for his computer expertise helping with the social media campaign for Reignite Democracy Australia.

“Unity for a cause has brought me here,” he said. “I feel deeply passionate to stand up for my generation and the ones to follow.

“I feel people my age aren’t brave enough to step up, because they’ve been taught to respect society.

“That society has now betrayed them and their futures.

“I feel God is doing something here, in this nation, in the here and now.”

Once inside Camp Freedom new arrivals set up their swags and tents, parked their caravans or set up beds in their cars. And they did this without anyone telling them where to park. Together they just figured it out, and then, instead of awkwardly talking about the footy or the weather, they vigorously shook hands with each other then went, ‘fuck it,’ before fitfully embracing.

Then they asked each other if they needed anything. They shared food, beer and dope, and they laughed as much as they cried.

As the new arrivals told the cheering groups lining the roads of the showgrounds where they were from, everyone cheered, in this new city where there were no QR codes, no social distancing, and no masks.

As Michael Gray Griffith observed: “The victory of this day was that we had answered the great question: ‘What sort of future do Australians want?

“The answer was clear. The people want Freedom.

“The Government, and its propaganda machine the mainstream media could never have compelled this many people to make their way, out of their own pocket, to the Country’s Capitol, chanting “I really want to take the booster.”

“It appears, as always, courage is finally trumping fear.

“Sadly, we will probably have to play out the rest of the game, which could take a while, but it is only for show, for like I said, and somewhere in the halls of power they have figured this out too, that in this war, that was brought to the people, we, the people have already won.”