The Prime Minister Who Destroyed Australia 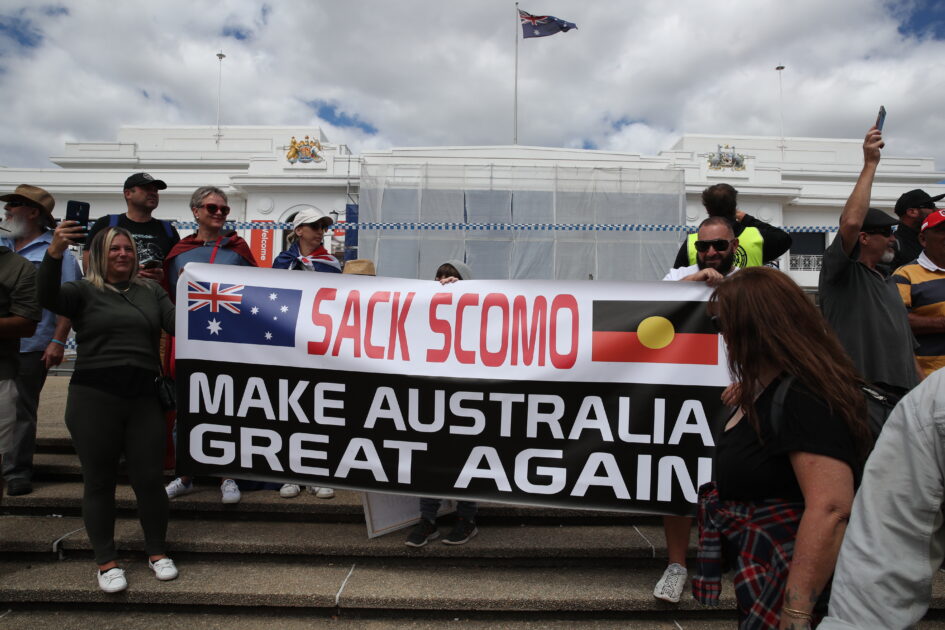 This is Chapter Four. The book will be available in the coming weeks. The series so far can be accessed at the bottom of this piece.

One young woman wearing a halter top with the word LOVEDOWN pencilled across her breasts pretty much summed it up. She held high above her head a sign which read: “We’re not from the Left or Right, We’re from the Bottom and We’re Coming for those on Top!”

Many hundreds of thousands of Australians had been protesting for months on the streets of the state capitals.

But this time around the deceptive conduct of mainstream journalists and the government apparatchiks pulling their strings no longer mattered; every single abuse by the authorities was streamed multiple times live to the internet; every last detail of this historic event was recorded and uploaded in real time.

People had travelled from all over Australia to be part of the Convoy; and it was now crystal clear that the government had entirely lost control of their Covid narrative of fear, hysteria and oppression.

A government which had lied constantly, which had destroyed the country and betrayed the people, now had a fomenting revolution on its hands.

Destroying millions of people’s livelihoods, careers, dignity and bodily integrity, as the Australian authorities had done, was always going to end only one way; with protestors in the streets.

Every day in the lead up to the major march there were demonstrations at various institutions around Canberra, including the High Court of Australia.

As luck would have it, on that first full day, as the town began to fill with demonstrators, Scott Morrison was scheduled to speak at the National Press Club.

Morrison’s shameless lust for power had landed him in a job he was not intellectually or temperamentally equipped to fill.

And made him the most despised person in the country; loathed not just by the millions of people whose lives he had destroyed under the cover of Covid-19, with his totalitarian instincts and his ever repeating lie that he and his ilk were “keeping Australians safe”; but by his own party, many of whom were just as aware as the public of the massive amount of harm this Prime Minister had done to the country and to his countrymen.

Not to mention their chances of re-election.

With well over a million people descending on the limited camping grounds of Canberra there was no privacy; and here is just one telling vignette.

You know you’ve lost the public when your name becomes synonymous with the act of defecation.

He had shown no sympathy whatsoever for the many protestors bashed in the cities, locked in their homes, fined and imprisoned; and not a single shred of empathy for the thousands of people who had lost their jobs for refusing the vaccine, or the tens of thousands of business owners who had seen their livelihoods destroyed by the governments totally over-the-top response to response to Covid. And no sympathy whatsoever for the hundreds of thousands of families separated from their loved ones thanks to the dramatic, and ultimately pointless, shutting of state and national borders.

Rather than siding with the people, he had inevitably sided with the dictatorial out-of-control conduct of State Premiers, acting under Emergency Powers they had gifted themselves.

The country broke apart under Scott Morrison’s watch; and now he was being forced to confront the people’s whose lives he had trampled on.

All in an election year.

If he was trying to keep up the pretence that the protestors descending on the capital were of little import; Scott Morrison had to do even more dodging and weaving than usual as he was confronted by a loud, proud and angry crowd at the National Press Club, normally a rather sedate venue where politicians are given undue reverence as they unveil their various plans, their speeches ritualistically followed by softball questions from tame journalists.

As the Prime Minister spoke the platitudinous words of his well prepared speech, a typical mélange of homilies mixed with a list of supposed public service achievements, his words were broadcast over the PA system to those who could not make it into the comfortable and exclusive rooms of the National Press Club. The crowd outside were having none of it.

Each mention of the virus and each self-congratulatory justification for the ruin his government had visited upon the country were greeted with groans and jeers.

“The past three years have been some of the most extraordinary that our nation has ever experienced,” the Prime Minister intoned. “Younger generations have never known anything like it.

“The succession of natural disasters from drought to flood, fires, pestilence, a once in a century global pandemic, the recession it caused, has pushed our country to the very limits.

“It has been tough raising your family, keeping your job, doing your job – especially for those health and aged care workers, who we thank for their tremendous service.

“It’s been tough keeping your small business or your farm going.

“It’s been tough keeping your children’s education up, caring for elderly relatives, those with a disability, and it’s been very tough on them too.

“Our way of life has been completely turned upside down.

“For so many Australians it has been exhausting – financially, physically, emotionally.

“And I don’t doubt many have stayed awake at night after telling their kids or those they care for, or those they employ that it’s all going to be OK, but wondering to themselves, in the quiet of that night, whether it really will be.”

It would be the last time Morrison would publicly attempt to put a positive spin on his and his government’s abject mishandling of Covid before he realised he was not on a winner.

Members of the crowd were colourfully and casually dressed; standing on the roofs of their cars, waving flags and placards including “In A World Of Propaganda Truth Is Always A Conspiracy”, and generally making it clear that the time for bullshit was over.

The scene inside the National Press Club was also more lively than usual, with prominent political commentator Peter Van Onselen confronting the PM with a leaked text exchange between the then NSW Premier Gladys Berejiklian and a member of his own Cabinet where he was described as “a horrible, horrible person”, a “fraud” and a “complete psycho” more concerned with politics than people, a Gotcha moment which added memorably to the public humiliation of the occasion.

The expression on the Prime Minister’s face when asked for his response to this contempt by people from his own side of politics was what Australians would call “classic”; “whacked over the head with a mullet”.

As the senior politicians who had shown up to support their leader departed in their chauffer driven Commonwealth cars, they were greeted with cries of “Shame On You, Shame On You”.

The Prime Minister’s car, with an apparently dumb founded Morrison inside, was pursued by protestors shouting “You Dog, You Dog”.

For Morrison haters, of whom there were many, it was a truly splendid day.

For a frustrated crowd, it was all great fun, and would have been funny if it had not been so serious, the damage wrecked on Australian society so complete.