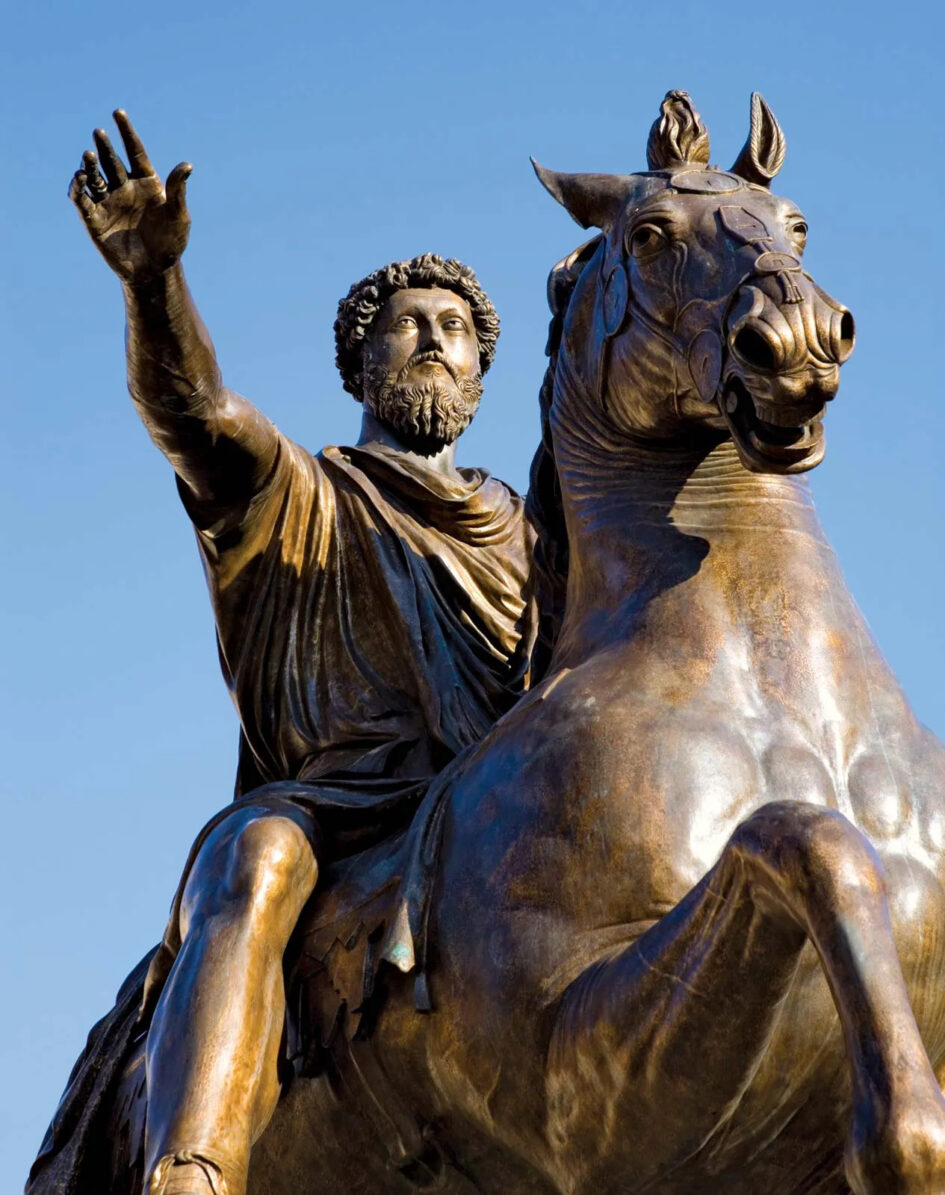 Here is her fascinating take on the little known love letters of a young Emperor.

“Those who love less should be helped out and lavished with more.”

An especially striking illustration of this equivalence, both for its intensity and its unexpectedness, comes from the adolescent love letters the future Stoic philosopher and Roman emperor Marcus Aurelius (April 26, 121–March 17, 180) to his teacher, Marcus Cornelius Fronto, collected and translated by Amy Richlin two millennia later in Marcus Aurelius in Love (public library) — a most improbable addition to history’s greatest LGBT love letters.

Fatherless since childhood, Marcus Aurelius was raised by his wealthy single mother, Domitia Lucilla. In 139, she hired Fronto — an African immigrant to Rome who described himself as “a Libyan of the Libyan nomads,” by then one of the era’s preeminent orators — to teach her eighteen-year-old son the art of rhetoric in preparation for his political career.

Across caste and rank, across twenty-some years of age difference, the two Marcuses fell in love.

In the preface to the collection, Richlin draws on the early Stoic philosophers’ forgotten axioms of sexuality to provide the deeper cultural context beneath the shallow reach of Roman law:

Zeno (335–263 BCE) and his successor, Chrysippus (280–207 BCE), argued that sex between human beings who have learned the proper principles of respect and true friendship is a good thing, and that the ideal society would be one in which sex was enjoyed freely, without propertarian bonds of marriage. In particular, the young person just turning toward philosophy, the prokopton, should be trained by his mentor first through a sexual relationship, which should grow into an understanding of philosophy.

And so it did for Marcus Aurelius and his mentor-turned-paramour.

It was through the portal of intellectual reverence that the young man marched his heart into love. By the end of 139, he had already become besotted with Fronto. After receiving one of his tutor’s essays, he exults:

Should I not burn with love of you when you’ve written this to me? What should I do? I can’t stop.

Soon, the young man began addressing his beloved as “my Fronto,” unselfconsciously calling him “my number one delight,” “my dearest and most loving,” “my biggest thing under heaven,” “breath of my life.” Fronto, at first, met this ardor with considerable reserve — self-restraint, perhaps — but it was an ambivalent reserve. Aware that Marcus was being courted by another man — not uncommon practice in their time and place — and that this suitor already considered him his “He-Sweetheart,” Fronto writes:

You seem likely, dear Boy, to want to understand… why, pray, I who am not in love strive so eagerly to gain the same Things that Lovers do. So will I tell you first how that may be. By Zeus, that Fellow who is so very a Suitor was not born with a sharper Pair of Eyes than I who am no Lover, yet I in fact am sensible of your Beauty no less than the rest; I might say, more acutely so than your Suitor.

Me you approach not at your Peril, nor at the Cost of any Harm will you keep Company with me; nay, ’twill do you every Good. Indeed, Beauties are help’d and benefitted more by those who love them not, as green Shoots are help’d by the Waters. For Springs and Rivers love not green Shoots, yet in their going near and their flowing past do they make them to flower and to bloom.

Fronto’s conflicted push-pull message achieved none of the push. With the same stubborn optimism and imperviousness to adversity that would one day make him a great Stoic and a great emperor, Marcus responds:

Go ahead, as much as you like, threaten me, accuse me… with whole clumps of arguments, but you will never put off your Suitor — I mean me. Nor will I proclaim it any less that I love Fronto, or will I be less in love, because you’ve proven, and with such strange and strong and elegant expressions, that those who love less should be helped out and lavished with more.

Two millennia later, W.H. Auden would echo this sentiment in his stunning poem “The More Loving One.”

Marcus accelerates the propulsion of his undeterred ardor:

God, no, I am dying so for love of you, and I’m not scared off by this doctrine of yours, and if you’re going to be more ripe and ready for others who don’t love you, I will still love you as long as I live and breathe.

Socrates didn’t burn more with desire for Phaedrus than I’ve burned during these days — did I say days? I mean months — for the sight of you. Your letter fixed it so a person wouldn’t have to be Dion to love you so much — if he isn’t immediately seized with love of you.

And then, in a touchingly innocent closing line, he adds:

Because I love you next to my own self, I want to make a wish for myself on this day.

In an imaginative romp through the intellectual and spiritual epicenters of the ancient world, he gathers a posy of blandishments and beneficences for his beloved:

I go down to Athens, and on bended knee I beseech and beg Minerva that whatever I may ever learn about letters should above all journey from Fronto’s mouth to my heart.’ Now I return to Rome, and I call on the gods of roads and voyages with wishes that every trip I take may be with you beside me, and that I may not be worn out so frequently by such ferocious longing. In the end I ask all the guardian gods of all the nations, and Jupiter himself, who thunders over the Capitol Hill, to grant us that I should celebrate this day, on which you were born for me, along with you, and a happy, strong you.

Fronto did not remain unresponsive. “With good reason I’ve devoted myself to you,” he eventually writes, “considering your love for me, which I feel so lucky to have.” Whatever the nature and magnitude of his own feelings may have been, he makes no pretense of denying that he loves being so loved:

Good-bye, Caesar, and love me the most, as you do. I truly love to pieces every little letter of every word you.

Plucked from antiquity when the manuscript was discovered in 1815, and reanimated by Richlin’s painstaking scholarship despite missing pages, illegible handwriting, and untranslatable sentiments, the forty-six letters collected in Marcus Aurelius in Love radiate a testament to an elemental fact I have observed elsewhere: The human heart is an ancient beast that roars and purrs with the same passions, whatever labels we may give them. We are so anxious to classify and categorize, both nature and human nature. It is a beautiful impulse — to contain the infinite in the finite, to wrest order from the chaos, to construct a foothold so we may climb toward higher truth. It is also a limiting one, for in naming things we often come to mistake the names for the things themselves. The labels we give to the loves of which we are capable — varied and vigorously transfigured from one kind into another and back again — cannot begin to contain the complexity of feeling that can flow between two hearts and the bodies that contain them.

For a further testament across time and space, savor Emily Dickinson’s electric love letters to Susan Gilbert and Herman Melville’s passionate epistolary longing for Nathaniel Hawthorne, then revisit the grown Marcus Aurelius, his wisdom having ripened under Fronto’s formative sun, on the key to living with presence and how to begin each day with unassailable serenity.

To follow The Marginalian, which we couldn’t recommend more highly, go here.