THE MEEK SHALL INHERIT THE EARTH 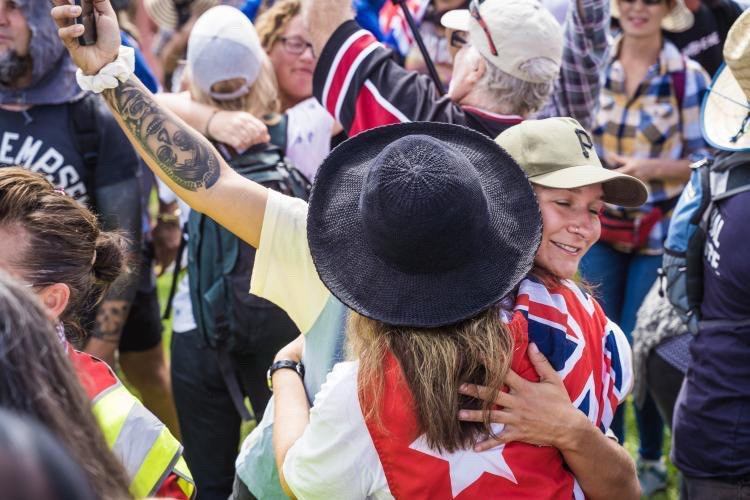 This is Part One of Chapter Seven. The book will be available in the coming weeks.

Exhibition Park in Canberra, otherwise known as Epic, lies on the northern outskirts of Canberra and is the site of the annual Canberra Show, which like other shows around the country exhibits the produce and achievements of local farmers, craftspeople and others, a festive occasion to delight the nation’s children and the public at large.

It features a network of showgrounds and a racecourse, variously intended for horses, dogs, cattle and other events, and is equipped to deal with large numbers of people.

Which was just as well.

As the week progressed, numbers rose from the thousands into the tens of thousands, culminating in an estimated 200,000 people on this one campsite alone. Hotels, campsites and other forms of accommodation were full across Canberra.

With numbers rising daily, the atmosphere at the heart of Australia’s Camp Freedom and the epicenter for the Convoy to Canberra was chaotic and glorious, jubilant, exultant; tinged with both exhilaration and fear.

There were plenty of smiles, music performances, hugs were for free and  kids played in between the tents or in organised activities; fire twirlers, opera singers, and impromptu artists added to the dizzying, joyful atmosphere, a kind of Woodstock without the drugs or the mud.

All participants said one thing: “This is history in the making.”

Crowds lined the streets of the campsite cheering the arrival of every new truck and car. “Welcome, welcome,” they shouted, whistling and cheering every last newcomer.

Now we’re from the right
And we’re shaking to the left
We close our eyes
Open wide
And take the test
We do a lock down turn around
Jump up and scream.
We’re just waking up to Corona 19

There were no QR codes, no masks, absolutely no social distancing and lots of tears. There were signs everywhere calling for freedom and “Hands Off Our Kids”.

There were no mainstream journalists at the centre of the Epic Showgrounds, none daring to show their faces at one of the most singularly historic gatherings in the nation’s history.

The role of Australia’s heavily manipulated and controlled media in promoting panic and marginalising those who did not want to comply with government mandated vaccines would be the subject of introspection and reflection for years to come. But that is an argument for another time.

Nothing, no amount of whitewashing or rewriting of history by the authorities, could change the chaotic and glorious scenes which overwhelmed the nation’s capital. More often described by outsiders as a “soulless shit box”, joy and outrage overtook Canberra.

While in the centre of the city the nation’s spoilt public servants, all masked up and socially distanced, added to the bizarre Stepford Wives feel of this artificially created city; at the campsite itself there were no masks, absolutely no social distancing, with complete strangers embracing each other, and certainly no QR codes.

This was myth busting at its best.

The hysteria visited upon the nation’s capital over a virus and cures heavily promoted by the most ruthless pharmaceutical companies on Earth, in league with local governments, was blown apart as hundreds of thousands of people joyously celebrated a freedom that had been denied them through the previous two terrible years.

If large gatherings really were “superspreader events” the authorities had been claiming they were as justification for shutting down everything from concerts to churches, then this was a superspreader event extraordinaire.

However there were no reports of Covid outbreaks as a result of the Convoy to Canberra.

As people celebrated their God given right to be themselves and common humanity won out at last, the high minded dictatorial lunacy of federal and state governments finally came to look exactly as it was: a criminal assault on the freedoms, the jobs and the bodily integrity of the populace.

There could be no going back.

There could be no going back to the days of house arrest and claims that gatherings of more than two people were a threat to public health, the days when if two people were talking outside their own home and a third person joined them that was regarded as a criminal offence and the neighbours encouraged to report them.

The game was up; the government perpetrated farce was over.

In the jubilant atmosphere, people would repeatedly start singing:

We are one, but we are many

And from all the lands on earth we come

We’ll share a dream and sing with one voice

It was one of the greatest stirrings of national pride anyone had ever seen.

Daniel, 45, a farmer from Kempsey on the NSW mid-North Coast, described it all thus: “Just the sheer magnitude of the gathering of the people, the smiles, the loves, the togetherness of everybody. Everyone helping each other.

“I came here; I just saw the inequality in everything around me and just knew in my soul that something was wrong and needed to be brought to light. That everyone needed to gather to put light on this.

“Everybody here wants freedom from the medical tyranny and segregation. They want to have elections that are untainted. And they need stop jabbing kids, because of their level of natural immunity they don’t need to be jabbed.”

“You come together, and people are able to sit down and talk without the fear of being alienated, vilified, outcast from the group, because everybody is accepted.”

Janaya Markwell, 25, Gold Coast, (featured image), a very lively young woman who, armed with nothing but a smart phone and boundless energy, became one of the most significant documenters of the Freedom movement. She said: “To find the words to describe what I’m experiencing is quite difficult but I’ll try my best. I’ve cried the most joyful tears from being so overwhelmed in the best way possible, the love and the energy is so beautifully electric. I feel at home here surrounded by like minded souls who have now become family, the community we’ve created continues to blow my mind as I’ve watched it all organically grow and come together.

“This is what they fear the most, from strategically dividing us for many many years to now we the people bringing everyone back together, restoring the love, compassion, empathy, connection, we the people have the power to create a new world for our generations to come.”

Alison, 49, a former café manager from Brisbane, said she had left her job three months before, unable and unwilling to deal with or enforce the endless health diktats of masks, QR codes, social distancing, the final straw being vaccine mandates. She particularly objected to the idea that she was supposed to push vaccines onto her teenage staff. She now travels the country in her Woke Folk Coffee Van.

“We had the police come every other day,” she said. “Each time they came they were inconsistent with their rules and said different things. Eventually I knew this wasn’t the place for me to be.

“All the doors shut behind me, and another door opened.

“The people here at this campsite have been chosen to be here at the end of days. This is spiritual warfare. This is heavy stuff. I have three children. All non-vaxxed. I have been fighting this since my first was born.

“The Woke Folk Coffee Van came into my life and allows me to go places and talk to people. It belongs in the people’s army. We need to push back. I aim to stay on the frontline, where all Australia needs to be right now.”

Simon, from rural Australia, says he wants to live in Camp Freedom forever with his pig called “Dude”.

“I drove in here and I couldn’t hold back the tears. I can truly now understand the meaning of the term ‘tears of joy’. It’s so beautiful. It’s home. I don’t want to go back.

“It’s overwhelming. It’s hard to put into words. I have never experienced anything like this. It’s very healing.

“Dude brings so much joy, especially to the kids.”

Guya from Bellingen, a small town on the mid-North Coast of NSW, said: “I am here to support freedom and a return to sovereignty.”

One young man told his story: “I had a franchise but because I refused to get jabbed I lost the whole business.

“My girlfriend is from the Philippines and she went back to her country, she was having trouble getting a visa here. She was pregnant.

“The $16,000 it was going to cost to have the baby here, we decided to put it into the business and I was going to go back to the Philippines for the birth.

“The lockdowns happened. 2020. I made no money from the business.

“Then they told me get the jab or lose my business.

“I just want to get back to my Baby Girl. And I want to see my girlfriend, I want to marry her.”

And then he started to cry.