Words Are Eagles: The essays of Gregory Day 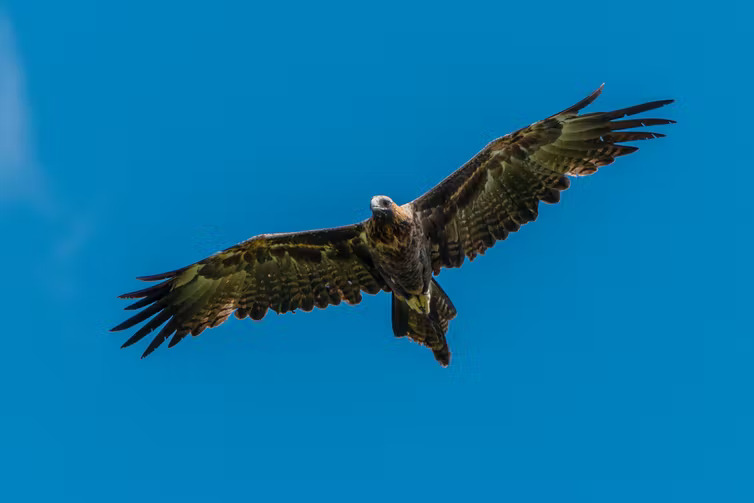 Gregory Day’s essay collection Words are Eagles is carefully subtitled: “Selected Writings on the Nature and Language of Place”.

The word “nature” has crept in there perhaps to give a nod to the reader to expect some version of “nature writing”. But this is not nature writing. In fact, the book gently but firmly suggests we should think beyond the category of “nature writing” as we have grown accustomed to it.

Review: Words are Eagles: Selected Writings on the Nature and Language of Place – Gregory Day (Upswell)

Nature writing has traditionally been a celebration of both the pastoral and the wild. It speaks of nostalgic, rural borderlands and, beyond them, the “undisturbed” non-human world of imagined wilderness.

“Natural or man-made?” used to be ideal as the first of Twenty Questions, in the game of that name. An object was either one or the other. In the tradition of post-Enlightenment Western thought, which most of us (including Day) are steeped in, sharp, confident lines are drawn between the categories of “nature” and “culture”.

But this book, in concert with ecocritical writing by Robin Wall Kimmerer, Donna Haraway, Anna Tsing and others, proposes other ways of relating to the more-than-human world in which we find ourselves. Day depicts not separation and detached observation, but immersion and entanglement.

Here we are in the river, swimming upstream, past the new jetty built for the tourists, both of which Day, as a local, can’t help but disdain and resent. We are in the river, with him and his old childhood friend, breaststroking slowly around its bends, coming across sites of memory and local legends of tragedy and wonder: the place where the kids built a winter hideout; the place the old guy from the pub drowned himself; the place the kangaroo was said to have drowned the dog that was annoying it.

Or we are in the forest, up beyond the river flats, where Day goes at night, alone or with others, in search of the “whoo-hoo” of the Powerful Owl, the local “monarch”, which preys on ringtail possums hiding in the darkness, performing “the mid-air ballet of the canopies of midnight”.

This is Day’s world, and the world of these lyrical, meditative essays – this place that is his, as well as not his. This is the place called Mangowak by its people, the Wadawurrung, and by the settler-newcomers Airey’s Inlet.

Day deliberately adopts the former name, as he has in the trilogy of novels he has set along this coast. Mangowak lies on the western edge of Wadawurrung country, at the far southwest of the confederation of the Kulin Nations, at the border of the estuary the Painkalac River forms with the Gadunabanud country of the Eastern Maar.

Day was born there and has lived and worked by the river flats for most of his life. He has Irish ancestors, who were among the earliest colonists in the district, arriving poor and eager to make a new life in 1841. Another ancestor arrived at a similar time from Sicily.

On this country, he acknowledges, he will always be an outsider, as a settler descendant largely ignorant of its timeless language and culture. Nevertheless, it is the only place he feels like he belongs and wants to belong.

Words are Eagles finds Day turning over, again and again, the question of how to belong, and what it might mean to belong, in a country in which one is both foreign and local. Moreover, to look back at the second qualifier in the book’s subtitle – “language” – he asks how to express belonging. How does one craft in words, word-images and word-rhythms, the contours of being and longing, which are always wrapped up together: “How to write, to sing, to say?”

Insofar as it dwells inside these questions, Words are Eagles makes a valuable contribution to the broader collective project of settler Australians learning how to relate ethically to First Nations people and their country.

The concept of an album

An essay collection is like an album, assembled so that it hangs together as a whole, even if it wears its “concept” lightly. One always has favourite tracks, and others that one finds less substantial, less hummable.

In Words are Eagles those are few and far between. I found almost all of the essays beguiling. Many of them play with the essay form, embracing its capacities for braiding scene and reverie, listing and fragmentation, the lyric, the personal and the critical.

Unlike a vinyl album, the collection has three sides. The first two sections roughly divide Day’s littoral (a word he loves) psychogeography – or as he calls it at one point “psychogeology” – into domains of land and ocean. The third section is devoted to what he calls “wreading”, borrowing a term from critic and poet Jed Rasula “for the collaborative momentum initiated by certain texts”.

I was at first suspicious that this last part of the book might be filler. Did I want to leave the river and the forest to read book reviews? It turns out I was happy to.

Sheila Heti says that writers need to bear in mind that approximately 10% of the effect of reading is what the writer intends to bring, while the other 90% is what readers bring from their own experiences, which the writer cannot imagine or predict.

Heti’s numbers are not scientifically derived. But they reflect Day’s sense of “wreading” as the transpositions a reader makes in bringing a story or a poem or a lyric essay and its characters into the physical settings he knows. For Day, Flaubert’s characters walk not in Normandy, but on a track in the Otway forest.

In his book reviews, Day is wreading, through the lens of his own situation, writers who are elsewhere, but who are, like him, negotiating their own encounters with place. His distant intimates include John Kinsella, Patrick Modiano, Felicity Plunkett, Colm Toibin and Tove Jansson – poets and novelists entangled in the “everywhen”.

Time and again one gets the sense that Day, through these readings, is attempting to arrive at a clearer definition of his own practice. For instance, at one point he describes Michael Farrell’s book I Love Poetry (2017) as “something of a recruitment manual for a state of being, or even a way of living in our times, wherein landscapes both analogue and digital become live screens of endless poetic potential”.

This is surely a way of describing Day’s desire too, though the “something of” is crucial. Definitions are always provisional.

The prize-winning first essay, The Watergaw, originally published in Griffith Review, sets the mood and establishes the stakes for what will follow. These are essays borne of movement through and in country.

Day is taking a drive with his wife and three-year old son, forty kilometres north to the flat volcanic plains near present-day Inverleigh. Grieving for his father, he has come to revisit the place his ancestors, James and Mary, made their home on stolen Barrabool lands in the 1840s:

I’ve entered their world, slipped between the layers of James and Mary and the Barrabool, let blood’s story lure me away a little from the gravity feed of my home coast and into this nearby back-country of reversed creation, of rifled waterways, penetrating absences, ostentatious farm gates, and GPS-programmed harvesters.

And there, in the gnaw of it, alights the watergaw.

“Watergaw” is the Scots word for a “broken rainbow”. The Watergaw is also the name of a poem by Scottish poet Hugh MacDiarmid, which comes to mind as Day is driving across the plains and he sees in the sky “a broken swatch of rainbow”.

The essay is a conversation between the son’s grief, the search for traces of his ancestors, and the example of MacDiarmid, who turned from writing in English towards a Scots creole that “tapped closer into the heartbeat of his land, to its structural braes and burns, its geologic fogs and onomatopoeic sleet”. It moves toward the insight that attachment to place is inextricably bound up with love, with family (“daggy, dun-ordinary”), with story (broken), and with language (imperfect):

For land is not place without sky, without the dark underneath, without the lit air of story and fable … This is us. The us of which we are never transcendent.

Hugh MacDiarmid is but one among many interlocutors. Historical figures as diverse as Paul Cezanne, J.S. Bach, William Buckley and David Unaipon all feature in one essay explicitly concerned with walking – walking as a way of thinking and feeling and sensing in motion, a method for encountering at the human scale.

This may start to make the collection sound abstract or academic, and it is true that Day, as well as being a novelist, holds a PhD. But it is the spirit of the lyric that asserts itself throughout Words are Eagles.

There is perhaps something of the Romantic lingering in these pages. But if so it is a new romanticism beyond anything imagined in the 1980s, a time and a cultural moment Day, who is also a musician, would well remember. This is romance in the sense that it is a story of love, and remembering that roman is the French word for novel. This is a novelist turning to the essay in pursuit of new ways to describe a love of place:

We are walkers, heading to and from our maestri, heading for fish, flesh and fire, heading for home. Some make for the joyous fugues, some for the image, the sound, the freedom, the perpetual mythology.

At least one thing is common to us all. En masse.

We are arriving, we are always arriving …

“The heart must accept its dark inheritance, its skylark nest of place,” writes Day. This is his invitation to fellow settlers and settler-descendants living with the legacy of the invasion of Aboriginal nations’ lands and waters. It is an invitation to go beyond the tropes of fear and denial on one side, and virtue-signalling or hand-wringing on the other.

It is an urgent invitation to become local, while respecting what you do not know and cannot claim. For a reader, like me, who is familiar with this place (the “Surf Coast”), Words are Eagles conjures an astonishing sense of what is hidden in plain sight: the polychromatic ochre timbres of the clay earth beneath the roads, the “pottery nest” of the willie wagtail couple in the boobiallas by the “eely river”, the Wadawurrung language the children are learning at the local primary school.

It makes you want to be there, really be there.