From All The Lands We Come 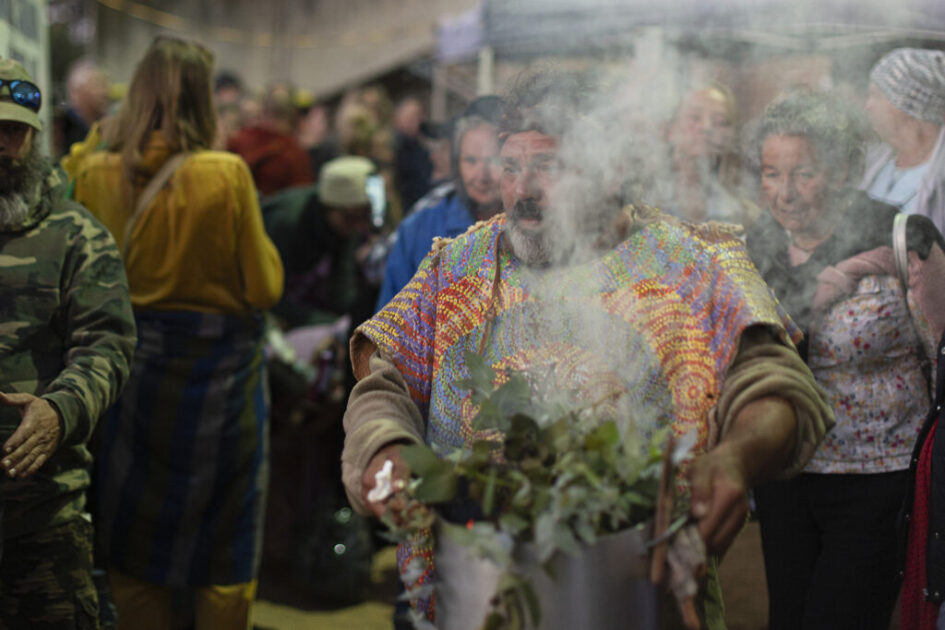 This is Chapter Two. The book will be available in the coming weeks. The series so far can be accessed at the bottom of this piece.

The excitement, and let’s be frank, the astonishment, gathered like a rolling storm.

The preceding days had taken everybody by surprise.

No one, not even the most optimistic of activists, predicted the size, strength, power and popular support for this spontaneous uprising.

Australians converged from all parts of the country, some footage showing mini-convoys barrelling down country roads. Everywhere was the same; blaring horns, waving flags, triumphal shouts.

As the convoy gathered strengths on the many roads leading to Canberra, crowds of locals assembled on overpasses and roadsides, waving flags and cheering them on.

Already these scenes and the rising tide of excitement were utterly unprecedented in the Australian experience, speaking to the historical nature of the event.

Day after day, images and footage of cheerful scenes at truck stops and campsites across Australia filled social media streams.

One participant, with an Instagram feed labelled Drain the Billabong, described himself as just a dude who loves everything to do with sport and works his ass off. He said of one of the impromptu roadside scenes at Wyong on the NSW Central Coast: “This is the Australia I remember and LOVE.”

They hadn’t even got to Canberra, yet on full display was a huge level of cooperation as trestle tables went up, BBQs were lit, food handed out, flags waved and t-shirts proudly worn, “I Stand For Freedom”.

One professionally signed utility read: “Communist Australia. We Masked For This.”

Hundreds of people, not one of them wearing a mask, were clearly in a celebratory mood; busily exchanging experiences and making new friends. Their dogs, which had also spent two years in the extreme isolation of Australia’s draconian lockdowns, mingled freely amongst the crowd.

Signs were erected: “Our Teachers Have Been Fired Because They Support Choice”; “The Threat of Unemployment Is Not Consent”; “Thousands of Workers Sacked”; “Help End Vaccine Mandates”.

Along the highways, long queues of cars festooned with flags and makeshift signs tooted their horns while drivers and passengers shouted cries of victory out their windows.

There was much to be angry about; but perhaps what was most striking about these spontaneous displays was the festive atmosphere.

In just one of the many scenes across the country, massive lines of trucks and cars descend on Pheasant’s Nest, normally a rather boring service centre on the road to Canberra; again the flags, the shouts, the horns, the spontaneous gatherings as people embraced each other, or engaged in earnest conversations as they shared their horror experiences of the previous two years.

It slowly dawned on everybody that they were not alone; that they were not in fact cranks and outliers flying against “the science” and the overarching wisdom of “the medical advice”, as their power-drunk political leaders had repeatedly told them was the justification for the destruction of all normal community life.

Their views were now mainstream; their longing for a return to the nation’s traditional freedoms, for the right to go about their normal ordinary lives, the lives they loved, was mirrored in everyone they encountered and embraced.

Families on the Pacific Highway leading to Canberra manned overpass bridges, waving flags and signs saying “Thank You”. As the multiple convoys converging on Canberra grew in size, so did the crowds applauding them.

Michael Griffith recalls his own experience on the road: “On Sunday morning I left Melbourne in a convoy of fifteen vehicles, several of which only came for a section of the journey, to offer us support and see us off. Still, the next morning, by the time we reached Wodonga we had grown to over 170 vehicles.

“All through the night people kept arriving at the makeshift camp, established on the side of the road opposite a service station.

“It was camp that had an electricity running through it. The kind of electricity that attracts. Most people didn’t know each other. Most had never done anything like this before, and no one had any idea what would happen next. All we knew was that we had come too far and now there was no going back. We were on a quest to save our country from tyranny, and we were all one people. We could all feel that too. Two years of division was bonding us into a tribe.

“One of the most remarkable things, was that on nearly every car was an Australian flag. A lot of people were also wearing it like a cape. And mostly it was the blue flag, and yet despite their clear pride for their country, their country had ostracised them.”

New arrivals into the Canberra campsites were greeted with cheers and waving flags.

“This is it, folks,” popular Aussie Chat streamer Dave Oneeg declared to camera on the main avenue leading to the national parliament, the sound of horns blasting in the distance. “We’ve been hearing rumours that this convoy approaching is about 25 to 30 kilometres long, maybe longer.

“This is the moment we’ve all been waiting for. Here they come. This is beautiful. I’ve got goose bumps. Aussie pride is back. This is the real deal.”

And then a most remarkable sight heaved into view on the normally sedate boulevard leading to Parliament House; a wall of trucks, cars and four-wheel-drives, Australian flags waving and horns tooting.

Messages of support from across the country and around the world streamed across Oneeg’s feed: “So proud of you of all you freedom fighters”, “Awesome”, “Ohhh, so beautiful!“, “My eyes are tearing”, “Stick together, stay strong, make us proud”, “Go you amazing people”, “The Aussie spirit has woken up.”

“Convoy for Freedom” reads the banner on one of the two lead trucks, the other reading, perhaps appropriately, “Over Size”, as the camera panned to a seemingly endless line of vehicles.

“HANDS OFF OUR KIDS” read a banner along the side of one massive lorry.

Another truck was bannered with the words: “Maskerade Over”.

Yet another was signed across its rear: “End Tyranny Free Australia”.

“Come on Aussies,” Oneeg continues, almost jumping out of his skin with excitement. “This is people from all over Australia.”

A young family on the side of the road waved makeshift placards, “Freedom”, “Stop Mandates”.

From the very first moments the protests were remarkably good spirited, as jubilant protestors waved and shouted out their car windows and Oneeg joyfully shouted back: “Heh, how you doing? You’re live on Facebook!”

Country music performer Dusty Starr put it thus in his song Locked Down Under:

One thing about history
It helps you see how tomorrow could be
And if you think we’ve learnt from our mistakes
They’re just reruns, old repeats
Denying freedom of speech
Propaganda machines
Clearing the way for a new regime
And when they call in the dogs
To herd all the sheep
It’s time to hit the streets

And make a stand
While you can
For your lucky land
The one thing we know that is true
This is a time of change.

There was not a mask or a QR code in sight; and zero social distancing.

The nation’s Chief Medical Officers, the same self-important bureaucrats who had been preening in front of the cameras month after tortuous month, suddenly appeared like the out of touch fools they were.

These grotesquely privileged apparatchiks, paid more than ten times the average wage of the workers they were trying to control, mesmerised by their own self-importance as they became household names, were so damn clever none of them realised you cannot save a society by destroying it.

For the first time in a very long time ordinary people, the ones without university degrees and fabulous salaries, felt vindicated; the feeling they had clung to that they were on the right side of history confirmed at last. Their days of isolation, of being ridiculed by politicians, bureaucrats, media pundits and their double vaxxed neighbours, were finally over.

This was not a few isolated crazies; this was a country which from coast to coast was declaring its disgust at the bureaucratic and authoritarian overreach which had been visited upon ordinary, decent people; the police bashings, the pepper spraying, the hi-tech weaponry used for crowd control; and the disgraceful deceits of the nation’s political class.

Observer and life coach David Nieuwenhoven, wrote: “There had been a lot of talk in various groups about heading to Canberra and making a stand of some sort in a non-violent way to let those know in power that we are well and truly over this absolute nonsense, mandates, fear mongering and more and many good people including nurses, doctors, fireman, teachers and essential workers just want their jobs back!

“Let’s face it, pretty much every person in Australia has been affected in some way in the last two years. Many people lost everything; including loved ones to suicide, jobs, friends, family and more.”

One young tradie spoke for many when at one of the parallel protests in Perth he shouted at the Premier of Western Australia Mark McGowan: “Give Us Our Jobs Back Ya Dog.”

The rich had grown massively richer, the public sector had expanded significantly, and the politicians ate up television time putting themselves front and centre of everybody’s lives; all, in the end, for what?

The only people who hadn’t had their lives and livelihoods destroyed or savagely impacted were the privileged political class, bureaucrats and the already ultra-rich, who were more than satisfied with the historic transfer of wealth upwards from the middle and working classes.

What started out as a “road trip” for a few dedicated activists desperate to reach out from the isolation of their own bunkers rapidly turned into something much bigger. The meme “Let’s go to Canberra” turned into a widespread and joyful chant, “Everyone’s going to Canberra”, spreading across social media and through the thousands upon thousands of individuals, families and groups coming from all corners of the country.

Social media platforms like Telegram and even Facebook, which had played an invidious censorship role throughout the Covid era, suddenly had thousands of people saying they wanted to go too, then tens of thousands, all focused on the sole idea of getting people to the capital whatever way they could; to be seen and heard, to at long last take meaningful action against the tyranny which had been crushing them and their families for far too long.

Trucks were out of the question for many, because most truckies in Australia do not own their own trucks.

So, people organised buses, carpooling, caravans and trailers were loaded, and people just decided they would get there however possible, by train, by bus, by plane.

Soon tens of thousands; then hundreds of thousands over a very short period felt compelled to head to the capital.

Every last person compelled to come to Canberra had a powerful and intensely human story to tell.

Many, without even the petrol money to return home, declared: “We’re not leaving until this is over!”

As one protestor observed: “Everybody here is on the verge of losing everything.”

There is an old saying: “Grace is more likely to be found in crisis than in comfort.”

And perhaps that was part of the reason for the wildly festive atmosphere; not a dance macabre in the face of death, but a breathtaking act of defiance and the triumph of the human spirit.