Joy and Calamity, Brutality and Kindness 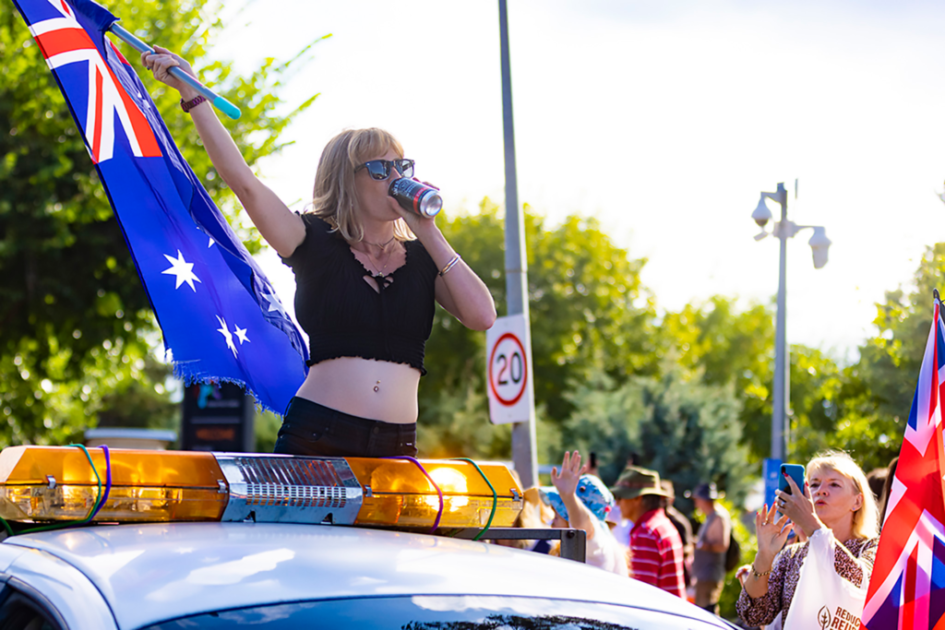 This is Chapter Six. The book will be available in the coming weeks. The series so far can be accessed at the bottom of this piece.

Australia was producing what looked very much like a national uprising.

Daily thousands upon thousands of people, all sorts of people from all walks of life, continued to stream into the capital.

The stills and footage from that first week of February show joyous signs of communality and good cheer among the protestors; while the fierce brutality of the crackdowns by police on the campers fully exemplified a deeper scandal.

By Saturday the 5th of February there were already massive crowds in Canberra, all the more remarkable as protests had been effectively banned during the era of government generated Covid hysteria.

The march on Old Parliament House that day in itself made history, and while it acted in a sense as a precursor to the even more massive demonstration the following weekend was completely remarkable within itself.

The dismantling of the impromptu camp in the parliamentary precincts had begun in earnest the previous day, the 4th of February.

Authorities appeared early in the morning with warnings they would move camp equipment and ‘illegally parked’ vehicles in the area, after issuing repeating similar warnings on the previous days.

Police located in a boat on Lake Burley Griffin issued warnings, through a loudspeaker darkly: “It is an offence for a person to camp on this land without a permit. It is an offence for persons to park a vehicle on this land without a permit. You are required to remove all vehicles, camping structures, tents and associated equipment from this location. You have one hour to comply with this request before police begin removing and taking custody of these items. Any person attempting to interfere with police in the course of their duties may be subject to arrest.”

On social media, ACT Police issued a statement at 8am local time warning the campers of the operation.

Soon after, a large force descended on the park.

As one unfortunate tow truck driver hitches up a car multiple cameras showed a police officer aggressively pushing a woman to the ground; the same style of aggressive misconduct which had soiled the Force’s reputation so badly over the previous two years.

The atmosphere was fiery and increasingly outraged.

David Oneeg: “Tactical response teams, Dog squads, Riot police and the rubber bullet boys, all for people and families who just want to say no to the death jabs and go back to work.

“This is the battle of the ages, not just here but all over the world. Choose your side carefully. Satan and God are playing for keeps.”

Sid, 73, travelled more than 1000 kilometres from Queensland whilst he was standing alone in the protesters camp with his dog,

He was ‘charged on’ by police, who pepper sprayed his eyes causing temporary blindness, just for being in the camp. He also got a cut above the eye from the shoving the police gave him that sent him to the ground – where they then sprayed him.

Oneeg: “Police brutality is standard operating procedure now, and The People are no longer threatened by it – they become more determined and those who are injured like Sid – who returned to camp and vowed to fight on.”

He became a source of inspiration for everyone to keep standing strong.

“It is not a democratic society when you are not only denied your freedom of expression including protesting but you are attacked and injured just for wanting to do it.”

Cars began complying, while some remained confused as to what was taking place.

At least with a campsite now organised at the Epic Showgrounds in the city’s north, there was an alternative.

Extremely heavily armed police and kitted out in full military gear, guns and gas canisters at the ready, dismantled camp gear and removed property of those who refused to move.

One former military officer among the protestors said the rubber bullets the police were armed with could kill if they hit in the wrong spot. Australians may once have been unfamiliar with the damage rubber bullets can do, but now anyone with a social media account could view the devastating injuries these bullets had caused to protestors during prior demonstrations.

“And they have canisters of CS gas. Anyone who has been exposed to CS gas will tell you, don’t do it today. It’s not teargas and it’s not capsicum spray. It burns everywhere. It is complete overkill. It is an absolute travesty of justice that this has been allowed to happen. I can’t believe they can stand there in conscience facing women and children with those weapons.”

One piece of footage, further damaging the already sullied reputations of the authorities, shows a police officer aggressively shoving a woman to the ground in front of her children.

The next day, Saturday the 5th of February, was an entirely different story; not of police brutality but of triumph.

While there were no reliable estimates of crowd numbers, footage shows tens of thousands of people turning up to protest.

There is a sea of flags along the bridges and boulevards leading up to Parliament House.

One woman holds up a large placard: “Breathing Working Travelling Hugging Loved Ones. Extremists?” Other messages include: “Vaccine Injuries Not Fake” and “Jesus Wins”.

We are one, but we are many
And from all the lands on earth we come
We’ll share a dream and sing with one voice
I am, you are, we are Australian

The time was upon us all, the time when Australia finally stood up to tyranny and confronted the dark forces which had consumed the country for far too long. These were the people the government was meant to serve, and had instead attempted to crush. They weren’t putting up with Australia’s filthy descent into totalitarianism a second longer. These were the days when Australia changed forever, and a remote and ever more ludicrously out of touch government could pretend no longer.

The mainstream and social media platforms had utterly disgraced themselves over the previous two years; but what the authorities, the politicians, academics and media personnel, directly or indirectly beholden to their vaccine funding sources, failed to appreciate was that in this era of hyper-connectivity, the military mindset of command and control no longer worked.

One of Australia’s new breed of young, passionate citizen journalists, Joel Gilmour, streamed just short of six hours of raw footage of the protests in Canberra, Australia’s capital, straight to Facebook, with thousands of comments, shares and likes.

He and his fellow streamers easily outstripped the influence of traditional media outlets.

It was a day straight out of the history books; destined to resonate in the country’s increasingly troubled history. There was strong participation from the indigenous and the nation’s veterans, along with thousands of sacked nurses, teachers and police who, amongst so many others, having lost their jobs as a direct result of vaccine mandates, had gotten in their trucks and cars and driven to Canberra.

Numerous people were pushing their children in prams, attesting to the peaceful nature of the event.