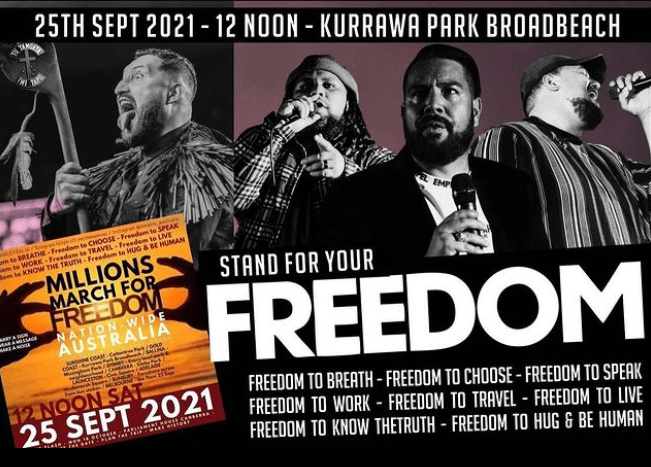 With Australia having become world famous for the worst response to Covid anywhere around the globe, including the city with the longest and most draconian lockdowns, Melbourne, and the most over the top policing, all state and territory capitals, here TOTT News finds a good news story in the midst of chaos; from the former tourist mecca of the Gold Coast, Australia’s equivalent of Florida.

The authoritarian derangement which has overtaken Australia seems barely plausible even to those of us who are living through it.

Links to a sampling of coverage of protests in other locations and from other sources can be found further down in this piece.

MUST SEE: Powerful scenes as cultures UNITE for freedom at Gold Coast rally

Despite continued establishment propaganda, members from a VARIETY of cultures oppose the current COVID dystopia in Australia.

Powerful scenes were witnessed on the Gold Coast today, as part of freedom rallies, which saw indigenous and islander communities take the stage.

Roughly 2,500 individuals gathered at Broadbeach on Saturday for the principles of freedom and medical choice, with an additional focus on solidarity with those trapped in Sydney and Victoria.

Protesters gathered for a number of speeches and some music, before marching through the local business district to take their messages to the street.

This was a particuarly important day with some very powerful messages.

TOTT News brings you footage from the Front Line.

The events today were put together, in large part, with the help of the Destiny Church group on the Gold Coast, with MMAMVA organisers, who provided the crowd with some fantastic entertainment for the morning.

The flyer tells you everything you need to know about what this group is fight for: Freedom to choose, freedom to speak, freedom to work and freedom to be human.

Attendees were treated to a positive day filled with rich culture and strong belief systems – a stark contrast to what the establishment would have you believe about this movement.

The mainstream media continue to broadcast the message that freedom campaigners in Australia are made up of ‘right-wing, Nazi’ ideologies – once again displaying their disregard for the truth.

Scenes on the Gold Coast today were the complete opposite, and in fact were so inspiring, their efforts are worth a single article on their own. The group treated the group to a traditional war dance.

“Tu Tangata means to STAND & today we did not just for us but our future and the generations to come!”

This was joined by musical performances, while the crowd danced, picnicked and connected.

A stark contrast to current scenes unfolding in occupied Sydney and Melbourne.

The group didn’t forget about these locations, and called for more engagement than ever.

A sign reads ‘We are with you Vic and Syd’ as The Last Post was played in honour of the Australians who fought and died for the freedoms the crowd stands for:

One speaker reinforces the notion that the group are fighting for ANZAC values. Let’s not forget soldiers from every culture at the rally served under this banner.

Enough of the good news. For the full story go to the original TOTT News story here.

And for other stories from TOTT this week check these links:

While Australia’s mainstream news sites have largely acted as propagandists or apologists for state and federal governments throughout this era of Covid derangement, Rebel News, once an outlier in the Australian context, have come into their own, with the aggressive “in their face” coverage by former member of the Israeli military Avi Yemini putting the rest of them to shame.

Some of the scenes from the past few days simply defy belief.

Paralleling in a sense the rise of Rebel News Australia under the tyranny of Covid, vlogger The Real Rushkan has been attracting tens or even hundreds of thousands of followers for his raw footage of the Melbourne demonstrations.

His success has been such that he is even attracting sniffy condemnation from the nation’s legacy left leaning mainstream media, including The Age newspaper.

His live streams, all of which will form a ground zero for future historians attempting to unravel what happened to Australia, can be found here.

A six hour plus stream from four days ago has attracted 2.2 million views. To view click here.

And another from three days ago has attracted 1.2 million views. To view click here.