Australia Burns: Riots on the Streets. The Best of 2021. 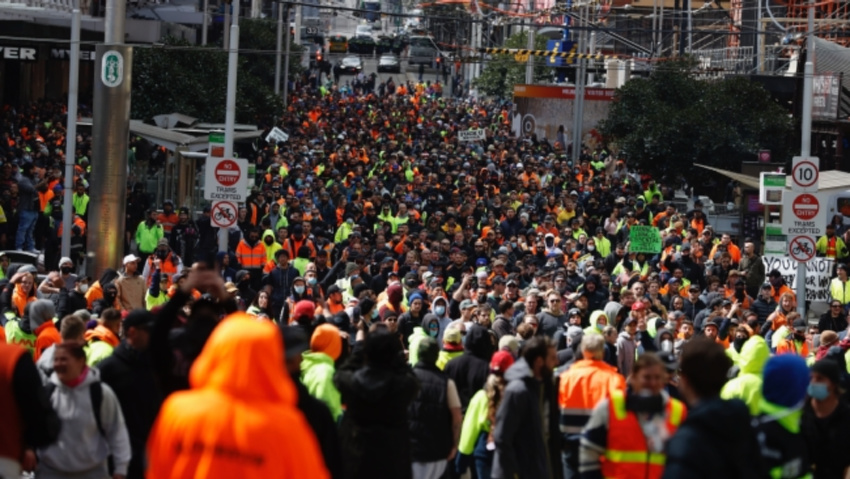 ‘We built this city!’: Pro-choice tradies bring Melbourne to a standstill

Thousands of blue-collar workers, and their supporters, have once again hit the streets of Melbourne to stand for personal freedom and medical choice.

TOTT News has the full timeline of events in the CBD today.

After dramatic scenes yesterday in the heart of Melbourne after the CFMEU turned its back on members of the union, protesters stuck to their claims of returning once again today.

Following the shutdown of construction industry for two weeks, a larger crowd descended upon the city, marching up and down for hours before taking their message to a busy highway.

TOTT provides readers with the full timeline of events below:

Demonstrators began gathering early once again in the same location as yesterday.

They begin chanting “freedom” and “f**k Dan Andrews”, as the crowd slowly grows:

At the same time, police form a line at CFMEU headquarters again to block the protesters.

They were in the area early to avoid scenes like those witnessed over the past 48 hours.

The media would have you believe the crowd is entirely made up of ‘right-wing, neo-Nazi extremists’. Setka and the mainstream presstitutes continued to drive this narrative home today.

While crowds were gathering this morning, Bill Shorten appeared on TV to spill a bunch of unfounded claims, calling the group “man-baby Nazis” and “rent-a-crowd” protesters:

Is Bill Shorten reading a script?

Either way, the dinosaur media desperately tried to run with these claims. However, a quick look at the crowd on the day dispels this myth perpetrated by the establishment:

Police fire on crowd to disperse..

Some in the crowd put their hands up, chanting “don’t shoot”.

The media are still reporting the crowd as ‘a few hundred people’ at this point on TV.

Marching through the city..

The large group (much bigger than yesterday) began marching through the city son after, chanting and singing, as they begin heading down to Parliament House:

A sea of Hi Vis uniforms take over the streets.

Any respect left for the media has vanished..

Speaking of the media, as the crowd began to march, Channel 7 reporter Paul Dowsley was hit in the back by a can. He claimed he had had urine tipped on him and his throat grabbed.

There will be plenty of faux outrage about the incident.

But the media’s own violence towards the citizenry by continually denigrating legitimate protest, by acting as agents for the authorities and by ignoring or failing to report some of the most brutal police excesses ever witnessed in Australia cannot be ignored.

By failing to hold the government to account and ceaselessly promoting government hysteria Australia’s mainstream media have been entirely complicit in producing an anxiety psychosis in the entire population.

Their own abject failure to report the story correctly throughout the Covid era have made them hated by protestors, who have been forced to take to alternative news sources to get their message out.

The Channel 7 presenter dismissed the attacks on their reporter as cowardice and acts of pack mentality.

Protestors often, and sometimes unfairly, attack media personnel because they see them as representatives of the authorities.

But this time round, the soul searching needs to go both ways.

The large crowd reaches Parliament House after a short walk, where more riot police are waiting for the crowd on the steps of the building. A standoff occurs, with protesters chanting “every day”.

From here, the crowd return back in the direction of Flinders St Station, walking up and down the street for about half an hour before returning back to the CFMEU headquarters.

Once again, police are waiting for the crowd, so they decide to take a different approach.

The group reaches their new destination, taking to the busiest highway in Melbourne to get their message across, as they march towards and across the West Gate Bridge.

Lines can be seen as far as the road stretches, as the group shut down traffic:

They didn’t have to, Dan Andrews did that for them by mandating a two week strike.

Time to sing and dance..

When reaching their destination on the West Gate Bridge, protesters take the time to enjoy the fun things in life after being locked down for longer than the entire world. A foreign sight in 2021.

Does this look like a domestic health terrorist group to you? Violent extremists?

While this dancing was occurring on the bridge, 3AW Melbourne — the station that had John Setka on yesterday to give comments that instigated the crowd — were doing their best to spin the scenes:

This caption would lead you to believe that a full scale riot has been occurring all day, with crowds tearing up the city and acting like thugs. You have seen the story to this point, however.

You can judge this bold propaganda by this radio station for yourself.

The protesters continue walking, before being met by riot squad again — who have arrived on the highway and begin firing to disperse the crowd. The group begins heading back to the city.

Protesters soon disperse off the highway.

After 7 hours of action, it seems like they are calling it a day.

Some protesters remain in the city. Police have formed a massive barrier around CFMEU.

A few arrests have been made for those who have stuck around the area:https://videopress.com/embed/yO3AxJqc?preloadContent=metadata&hd=1

As the protests began to wind down, Dan Andrews condemns the protests from happening, while praising those who remain at home following strict lockdown guidelines.

Dan says: “There’s no excuse for the terrible behaviour we have seen over the last two days”.

You’re right, Dan. There are NO excuses for loss of freedoms and no excuses needed when exercising the important democratic right to protest in a first world, Western nation.

As for the behaviour being ‘terrible’, well, the footage speaks for itself.

Protesters have vowed to return “every day” until their demands are met.

Not thugs, ‘Nazis’ or terrorists, but hard-working men and women, looking for their freedoms.

The conflagration on the streets of Melbourne dominates Australia’s legacy media today. Largely condemnatory or dismissive of the thousands of people who have taken to the streets over the past 18 months, facing massive fines or imprisonment for daring to demonstrate against the destruction of their lives.

These events mark a significant turning point in the derangement which has overtaken Australia since the beginning of the Covid era, with the secretive, irresponsible and impossibly arrogant government apparatchiks who have seized the opportunity to imprison their own populations and cement their own power finally being brought to account; with the consequences of their actions now clear for all to see.

Chief Commissioner of Victoria Police Shane Patton says 62 people have now been arrested after today’s protests, and that investigations are ongoing so that number is likely to increase further.

He says the actions were completely unacceptable.

“Crowds like this, therefore cowards, cowards who seek to hide their identity and conduct activities and do things that if they were by themselves they wouldn’t have the courage to do, the type of activities committed by these people today, these cowards, was disgraceful,” he says.

Police have fired pepper balls and stinger grenades at violent anti-Covid lockdown protesters on the streets of Melbourne as Australia’s second-largest city – under stay-at-home orders for the 233rd day in total – descended into chaos.

Rubber bullets have been fired and journalists attacked as tensions boiled over on a second day of angry protests against the mandated COVID-19 vaccines and construction ban in Victoria.

Hundreds of protesters, many wearing high-vis gear, marched through Melbourne’s streets on Tuesday, on the second day of demonstrations resulting in warnings from police.

As the day unfolded, the tradies’ protest rally became more violent, with one journalist – Paul Dowsley from Channel Seven – being assaulted multiple times.

Violent construction protesters have circled back to the CFMEU headquarters in Melbourne where they have been met by a wall of armoured police.

Thousands of union members and tradies blocked Melbourne’s streets on Tuesday on the second day of demonstrations against Victoria’s lockdown, mandatory vaccines and the construction shutdown.

Video clips of some of the most dramatic confrontations ever seen on Australia’s streets can be accessed via the TOTT News site here.

And on the Real News Australia site here.

The unprecedented scenes are also attracting international coverage, such as this in Arabic news channel Al Jazeera: