Australia Destroyed: The Streets of Melbourne 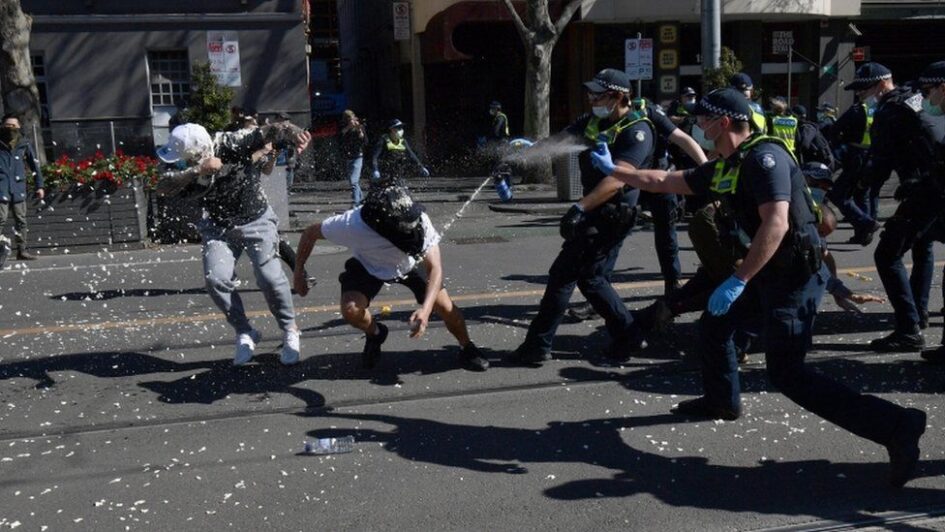 In the previous few days Australians have witnessed unprecedented scenes of the brutal crushing of dissent on the streets of Melbourne, which has now officially suffered through the strictest and longest lockdowns in the world.

The result of these deranged public policies are now clearly evident on the streets.

As numerous experts around the world have warned since the beginning, lockdowns don’t work, but Australia’s political class has ignored all the warnings.

The $22 billion construction industry has now been shut down, sending 300,000 workers into unemployment; often unable to pay their bills or care for their families. The government is demanding compulsory vaccinations before workers can return.

With millions of disillusioned and angry people still enduring curfews and house arrest across Australia, this situation is only going to get worse.

The sight of Victoria’s Premier Daniel Andrews and the Australia’s Prime Minister Scott Morrison, both pudgy unfit men grown fat on the public purse, condemning the behaviour of constructions workers, that is those who get up and go to work for a living, has been truly sickening to behold.

Neither of these two fourth rate political operatives would survive a single day working on the nation’s tough building sites.

But they’re happy to condemn those who do.

Australia has had the worst response to COVID of any nation on Earth. Now, with all liberties and traditional Australian life destroyed, we are living in a dystopian future none of us could have imagined even remotely possible 18 months ago.

Democracy died on their watch.

The Prime Minister of Australia has been off in Washington hobnobbing with the Leader of the Free World, the Geriatric in Chief President of the United States of America Joe Biden.

As part of what can only be hoped was a valedictory tour, Morrison announced a $90 billion nuclear submarine deal. Military spending having escalated during the Covid era, but those whose sweat pays for these massive contracts, such as the construction workers of Melbourne, will be unlikely to see any benefit from these massive outlays for themselves or the nation during their lifetime, or even the children’s lifetimes.

Meanwhile outside the surreal world of Washington canapes and diplomatic glad handling, Morrison’s own country burned.

There was scene after scene which simply defied belief; a 70-year-old grandmother lying helpless on the ground while the police pepper sprayed her in the face; a passionate young worker soon to have his face smashed in so badly by the police he would be lucky to live; a construction worker given his notice who simply walked off the side of the building, committing suicide.

While that taxpayer funded lying machine, the ABC, the Australian Broadcasting Corporation, ran innuendo after innuendo claiming the protestors were being infiltrated by “neo-fascists” and right wing groups.

What, people who dared to exercise their democratic right to protest were now neo-fascists?

Yep, that’s the one.

The slur of being fascist or right wing has been repeatedly used for years against groups that have dared to exercise their democratic rights and disagree with government funded narratives, be it climate change, multiculturalism, mass immigration or gay marriage.

The politics of the country are now so vile it is like drowning in slime just listening to them, and the dishonesty of the ruling elites has besmirched all our souls.

The mainstream media has also covered the riots, often in sniffy tones.

Fortunately or unfortunately, those who are protesting pay little or no attention to traditional news sources.

Common decency is over.

The brutalist regimes of the future were already in the present.

The cosy familiarity of a country called Australia has gone.

All much of the world had ever known about the country, thanks to populists documentaries, was that we had the most dangerous animals on Earth.

Now people, still naïve enough to believe their politicians, talk of Freedom Day, how good it will be, but freedom day never comes. There is always myriad of excuses for locking people in their own homes, that is, imprisoning entire populations.

Nothing happens without a reason, is that what they say?

Ad hominin. But what was the term for attacks against an entire class of people? For an entire population?

You lock them up and throw away the key, you destroy their livelihoods and give them no hope.

Never has there been more incompetent government.

Never has been there more violent displays on the street.

The governments state and Federal are virulently pushing vaccines, as if they were the cure to this terrible impasse.

You can have these freedoms back when we get t o 70%, 80%. The problem is people in lockdown have plenty of time on their hands. They can look up all the latest studies and analyses of the efficacy of vaccines for themselves, all of which made pose numerous questions about the mass vaccination campaigns being run not by the medical profession but by various governments.

Here, for example, is an excellent and authoritative piece on the rapidly evolving nature of the debate.

Who were these people?

How did these fourth rate political apparatchiks gain so much incredible power?

Someone will very likely be killed during these increasingly violent protests.

As the protests attract worldwide attention, both mainstream and citizen websites have been running live streams of the protests. The evolution of video technology has provided an increasing democratisation of information, while the heavily manipulated mainstream media has been left struggling to keep up.

Many streamers are now gaining thousands of followers with each passing day.

One of the best known has been Real Rukshan who posts here and has provided many hours of footage which will provide invaluable material for historians struggling to understand how Australia descended so rapidly into a totalitarian hell.

He bills himself as an Independent Journalist & Digital Content Creator

Of all the garbage to emerge in the last few days, one of the most sickening has been the faux outrage that construction workers have been protesting around the centrally positioned Shrine of Remembrance, claimed insincerely by the political class as a “sacred place”.

Many of those fallen soldiers went to war at the behest of the oligarchs of the day, farm boys off for the adventure of their lifetime who did not return, breaking the hearts of their families and sacrificing their own futures in foreign wars.

They did not die on those distant battle fields so Australian authorities could lock up millions of their own citizens, place millions under curfew, destroy the lives of so many of the citizenry.

The irony of construction workers, the same class of people from which those soldiers of yore were drawn, are also fighting for freedom seems to have been lost.

Melbourne is now preparing for another day of protest. Day Five since the shutdown of Victoria’s construction industry.