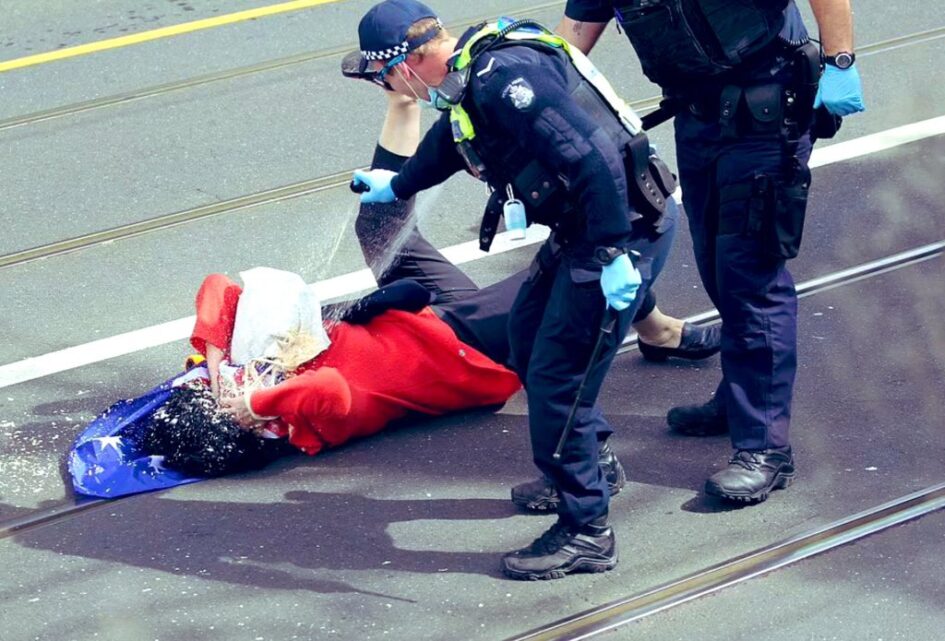 Tens of thousands of Australians have marched across the country for the principles of democracy, freedom, medical choice and objection to segregation.

Freedom protesters staged unified protests across Australia yesterday, delivering messages of resistance to an establishment that has stripped fundamental human rights away for 18 months.

Opposition against plans to introduce a two-tiered society based on personal medical choice was at the core of the rallies, as well as issues relating to health, the economy, democracy and more.

For an analysis of events in Melbourne, please click here.

A number of speeches were given in the packed park, before the demonstrators began moving through the Brisbane CBD, chanting ‘freedom’ and holding placards:https://videopress.com/embed/YryAaUaO?preloadContent=metadata&hd=1

Citizens can be seen as far as the streets can stretch, as the crowd moves through the city:

In a new addition to the rally route, the demonstrators passed through the popular and busy Queen Street Mall outdoor precinct, before returning again to the road:

Queensland Police were once again pleasant and allowed for the demonstration to head through smooth. One 55-year-old man was arrested for.. flying a drone illegally (huh?).

Apart from this one minor event, and a cry of outrage from the crowd, business returned back to normal soon after, and residents completed their march before returning for closing speeches.

Once again, Queensland turns out and shows very strong solidarity with locked down states.

This wasn’t exclusive to city locations, either.

After successful demonstrations last month at the Queensland/New South Wales border, residents in the surrounding areas gathered once again to oppose ongoing restrictions.

Led by indigenous elders, speeches were given, before the sizeable and passionate crowd marched through the coastal town of Coolangatta:

Protesters are campaigning against tough ongoing QLD border closures, which the Chief Health Officer said will remain shut until the state hits at least a 70% vaccine target.

This milestone, according to QLD Health, is expected to be hit at the end of next month.

A Freedom Day rally planned for Sydney fell through after police arrived at meeting points before protesters and set up a series of checkpoints across the city.

City-bound traffic and public transport were subjected to police checkpoints, while taxi services and other transportation methods were prohibited from taking passengers to the CBD.

Like last month, with many suburbs still under strict military lockdown, it is very hard for most to reach the city — which was already difficult enough prior to restrictions (sorry Sydney, I love you lol).

Multiple people did indeed make it to Sydney Park, however, which was being patrolled by dozens of officers to prevent protesters from gatherings.

One man was led away by police after he spoke to a crowd of picnickers and police officers arrested two others for not wearing face masks:

A young lady is stopped and searched for daring to step outside of her local area radius.

Give me a break.

NSW Police even had a photographer there to get some official shots! See below:

About 5,000 West Australians joined pro-freedom protests around the country, calling Premier Mark McGowan a “dictator” as they marched through the CBD.

While WA is enjoying few restrictions at this stage of the COVID-19 pandemic, that hasn’t stopped the group of activists demanding their freedom at Forrest Chase yesterday afternoon:

Residents can be seen holding placards calling for an end to mandatory vaccination policies being enforced by some of the country’s biggest businesses, while calling for borders to be opened.

There was a heavy police presence in the city for the event, which, in contrast to violent scenes in Melbourne, appeared to be very peaceful. This is what happens when freedom is permitted.

After some speeches at Forrest Chase, the sizeable crowd marched through the Perth CBD:

Those who were on the ground are calling the event a smashing success.

Thousands also attended a peaceful two-hour rally in Adelaide yesterday, in an event which saw no arrests made or fines issued to members of the public.

Protesters gathered at Rundle Park in the CBD, to hear a number of key speakers:

“(The students) asked him, is this the law? And he explained to them that it wasn’t, he got a copy of the direction, he told them the truth about it,” retired judge Stuart Lindsay told those at the rally.

“Now, it just so happened the principal of this school was walking past the classroom when he was doing that and he overheard this conversation with the students and he metaphorically dragged Andrew out of the class and there was a discussion at the door of the classroom.

He didn’t like the truth being told about the mask mandate,” said Lindsay.

Many demonstrators held creative signs to get their pro-choice message across on the day:

The crowd would then take to the streets, filling the city as they marched forward:

Check out a great recap of the event in Adelaide at the following link below:

A freedom protest was also held in Byron Bay on Saturday.

It began outside the courthouse in Middleton Street and eventually moved to Apex Park at Main Beach, where the crowd was ultimately dispersed.

Protesters have also gathered in smaller community locations across the country.

TOTT News are sourcing material, which will be added to their coverage.

For updates and to access additional video footage go their page here.