What is Wrong with Calling the Melbourne Protests ‘Far Right’ 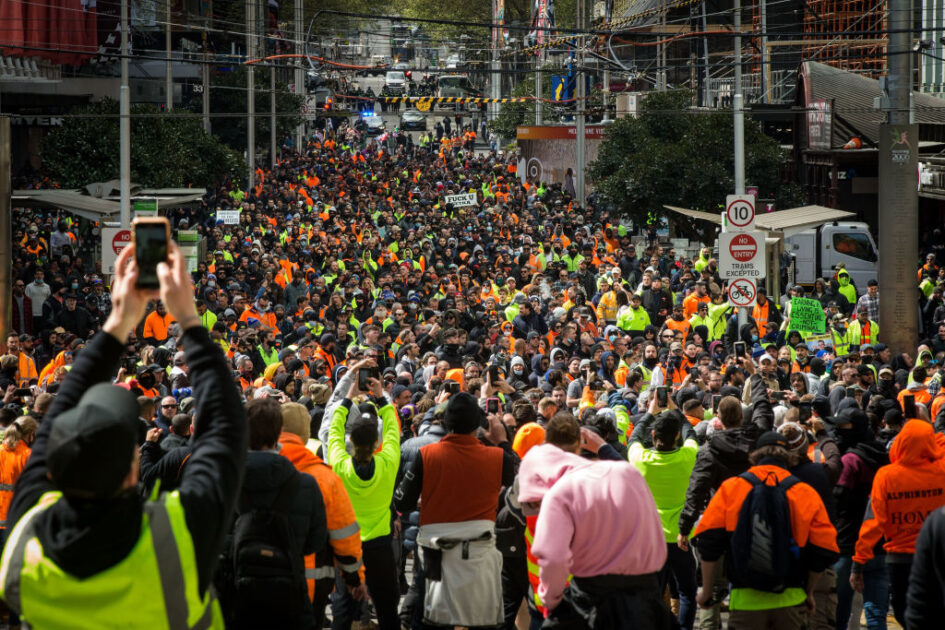 Over the past week there has been a great deal of debate about who exactly has been storming through Melbourne’s streets. It’s been repeatedly claimed, including by union leaders, that the protests, which started over mandatory Covid-19 vaccinations and restrictions on the construction industry, have been ‘infiltrated’, ‘orchestrated’ or otherwise organised by far-right actors.

So far, the allegations of far-right manipulation have been vague and unspecific. No one has yet identified any actual far-right figures involved in organising the protests (although some have attended them), given any evidence of what they’ve done or even been clear about what exactly they mean by ‘far right’.

Thus far, there is little indication of meaningful involvement by known far-right groups or actors in organising the protests. Indeed, as anyone who has been watching them would know, the protests have barely been ‘organised’ at all. Meeting points are sent out over Telegram and individuals share them across their own social media accounts on other platforms like Facebook and Instagram. Beyond those meeting points, however, there really hasn’t been much organisation in the protests to date.

It’s clearly true that there have been individuals with far-right beliefs in the online groups and on the streets of Melbourne over the past several days. However, there’s no good reason to think that these people form a majority of the crowd. The nature of these kinds of ‘anti’ protests is that the participants are united by what they’re against, but often have wildly differing opinions on what they’re for. Protesters are likely to be driven by a range of views, from a genuine opposition to mandatory vaccination on the grounds that it violates their rights to an equally genuine conviction that Bill Gates is using the vaccines to smuggle microchips into people on behalf of Satan.

Labelling all these people as being far right, white supremacists or neo-Nazis, as the building industry union has suggested, is not just inaccurate. It’s actively harmful, because it hands anti-lockdown protesters a propaganda tool which they can use to their advantage. The logic goes: ‘They say we’re white supremacists, but we’re not. If they’re lying to you about this, what else are they lying about?’

In a multitude of protest chats and livestreamed videos over the past week, protesters have reacted angrily to the suggestion that they are far-right extremists. Well-known livestreamer Rukshan Fernando spent the first minutes of his video of Tuesday’s protests seeking out non-white members of the crowd, jokingly asking them if they were white supremacists.

‘I’m here with the right-wing extremists,’ he said, filming a group of Sikh protesters. ‘These are the neo-Nazis extremists here. The media is saying that the working people of Victoria are right-wing baby neo-Nazis, but here we have people from India, Sikhs from Punjab, working-class Australians from all walks of life, and they’re calling them baby Nazis and right-wing extremists on television!

‘So what I’m trying to show you guys is the way that the media and the authorities have manipulated this entire thing with their false narratives,’ he said. The video had received more than two million views as of 24 September.

In another example, during the stand-off between protesters and police at the Shrine of Remembrance on Wednesday, a speaker with a megaphone said, ‘One thing I wouldn’t mind knowing is when they’re going to get better rhetoric than saying we’re all white supremacists. I’m not seeing a lot of white supremacists! Maybe one. Go on man, we know your rhetoric, we’re onto your rhetoric, and it’s weak. The people are seeing through it, and we’re seeing through it, and maybe that’s why [the police] have to keep showing force, because you know your rhetoric is failing and the regime is dying.’ That video had 1.2 million views as of 24 September.

This demonstrates why it’s so important to be accurate, careful and evidence-driven when talking about these protests, these movements and these groups. Fraying trust in authorities and legitimate media is further eroded by simplistic, inaccurate narratives about supposed shadowy far-right puppet-masters who never seem to materialise.

The threat from the far right is real. Where there is clear evidence for the involvement of far-right groups or influences, that should be called out.

However, the use of ‘far right’ as a generic label slapped onto every anti-lockdown protest dilutes the meaning of the term, hinders understanding of what’s actually going on, and can be actively counterproductive.

We cannot combat conspiracy theories with our own search for invisible bogeymen. Inaccurate reporting and commentary on protests like those Melbourne has experienced this week undermine trust just when it is most crucial.