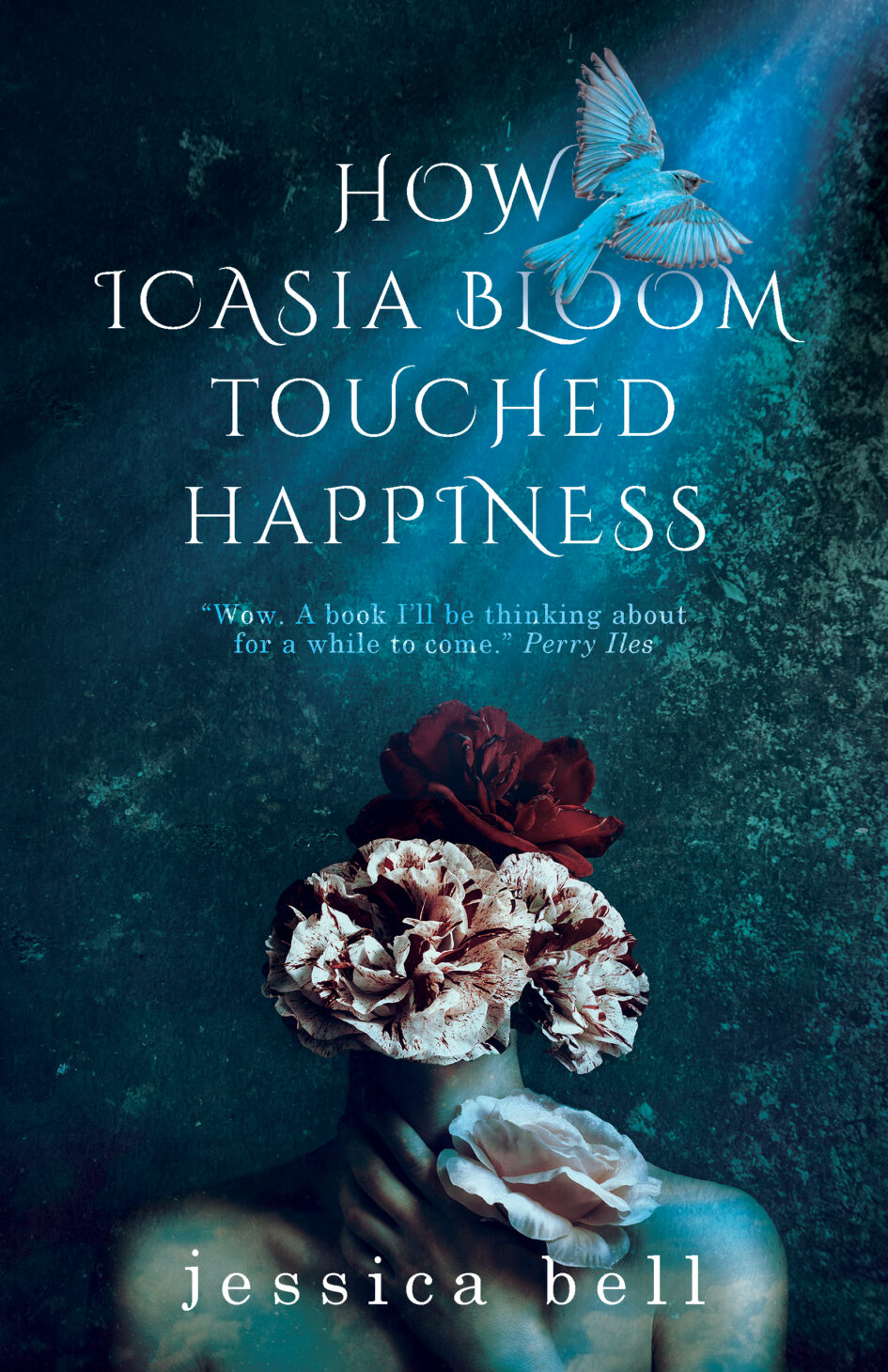 DeathCare therapists used to say, “Die happy, live happier.” It was plastered on billboards, on the sides of buses, on the napkins at McCrackador’s, and in at least two ads in every inTel Comm-Brk. The therapists would show their pearly whites and recite it like a star in a buy-this-toothpaste-coaxing.

I guess we were brainwashed. I’ll let you be the judge of that, Eve. Looks to me like you are already disgusted, not that I blame you.

I have to admit, though, the sentiment was fine. But during compulsory therapy sessions—which were free to every law-abiding citizen in their First Life Phase—they made us believe that in order to die happy, we had to have successful and fulfilling careers. So that’s what most people did. They chose a profession and aimed to be the best at it.

I didn’t. In all honesty, I also chose not to work or live with my son’s sperm donor because I thought it would give me the opportunity to spend quality time with Abel, making sure he would die happy instead of me. I had no dream of becoming anyone. I learned too late.

So I lived by swapping favors. That’s why homeless stats were down to pretty much zero. Tit-for-tat, that was the official term.

I accepted my life as a tatter. Without a job or a successful career, I knew I would not ‘die happy,’ but I couldn’t expect my son to take responsibility for my future. I would not move onto the Second Life Phase.

I figured I’d do my best to give Abel that chance. And that was good enough for me.

Until I met the Beyetts.

Make yourself comfortable, Eve. You’ve got a lot to learn before we begin.

Selma Beyett had opened a bakery a few blocks from my squat. I’d been eyeing it for a couple weeks while under construction. As soon as the shop window was painted with Selma’s Sweets & Savories, I knew it would be the place where I could score me and Abel a daily breakfast deal, and maybe a loaf of bread for lunch.

I was good at selling food. Everybody needs food. So I figured in exchange for some goods, I could start bringing clientele to Selma’s shop.

But it didn’t quite work out that way.

When I opened the door, the aroma of baked bread, chocolate cake, and mint slice filled my senses. It was a smell I’d daydreamed about but never actually experienced, so I stood there, breathing deeply, in and out, as the door chimed closed, thinking how much nicer this bakery was compared to the ones I’d seen in the When Today Was Then show. Having never set foot out of my own neighborhood, the only bread and sweets I saw were mass produced and sold in plastic. And scoring a tit-for-tat in a mainstream Sparket was like asking for a stone to donate blood.

Selma rubbed her hands dry on a red and white striped tea towel and smiled. Her curly bright orange hair was held out of her face by a thick black headband. She wore black, head to toe, leggings and turtleneck. No jewelry, no make-up.

I felt self-conscious about my scraggly and limp mousy-brown Mohawk and 50-year-old brown leather jacket that was cracked around the shoulders and cuffs. What made me feel like a cool kid on the streets made me feel like a pauper in Selma’s presence.

“Hello there,” Selma said. Her tone wasn’t high or low, but captured the same kindness you hear in your favorite schoolteacher’s voice. “You’re my first customer. Do you think that might be lucky?”

I walked toward the counter with my hand held out in confidence.

“Hi. I have a proposal for you,” I said. I figured I’d just get right to it. Experience had taught me that the more foreplay you engage in, the more focus you begin to lose on the main event. I once walked out of a shop with a good working knowledge of bioengineering, but no food.

“Oh,” Selma nodded. “Would you like to try one of my peach danishes first?”

I blushed. Here was this lovely lady standing before me, offering me food before I’d even asked for any, and all I wanted to do was make the deal and get a move on. She must have noticed my cheeks turn red because she added, “On me, of course.”

I was speechless. Free? For no exchange? That was unheard of in those days, Eve.

Selma slipped a freshly baked danish onto a napkin and handed it to me. I took it, sniffed it, closed my eyes to make sure what I was smelling was as delicious as it looked. With my eyes still closed, I took a bite. Saliva flooded the sides of my mouth and I groaned in pleasure.

Selma chuckled. I opened my eyes.

“Oh shit,” I said, wiping my mouth on my sleeve. “I’m so rude. My name’s Icasia Bloom. This danish is the most delicious thing I have ever eaten in my whole goddamn life.”

It was Selma’s turn to blush.

She wiped her hand on her thigh, and it left a faint white handprint of flour. She held it out for me to shake.

“I’m Selma. Just Selma will do.” She nodded at her shop front window. “As you are probably already aware.” We shook hands. “Please, take a seat,” she said, gesturing behind me.

I turned around and saw that she only had one table and two chairs. I looked at her questioningly. Maybe I could try and wrangle her some furniture in exchange for some food, I thought. But before I could say anything, she beat me to it.

“I believe that less sitting space means there’s less chance of people hanging around for hours, making one coffee and a muffin last all day.”

I nodded. Smart, I thought. Maybe this wasn’t going to be as easy a deal as I’d expected. I’d always thrived on making deals with newbie businesses. They were afraid of failing and welcomed the assistance.

“Oh, dear me, please forgive me, I didn’t offer you a coffee!” Selma stood up, but I grabbed her hand and said, “Dude, I’m fine. Really.”

She stared at the tattoo of the Sanskrit swastika on the inside of my wrist. She paused, halfway out of her seat.

I stopped chewing. I had a feeling that my gesture had backfired. Anger glistened in her eyes. Or was it concern? Had she regretted asking me to sit down? Maybe she didn’t know that the swastika was originally a symbol of life, strength and good luck. I was not one of those Nazis from back in the day when the Globe was separated into countries, when leaders in various governments played Russian Roulette with cryptocurrency and sent the world tumbling into the greatest depression in its entire history, but I panicked that she thought I was, so I pulled my hand away, grabbed my bag and said, “I’m really sorry to have bothered you. Thanks so much for the danish. I’ll be sure to recommend this place to anyone I can.” I stood up quickly to leave.

I was kicking myself. I’d done it again. Got sidetracked by the pleasantries and neglected the real purpose of my visit.

Selma sat in silence as I walked to the door. I paused for a moment, thinking I should stop being so embarrassed and presumptuous and ask her for a deal anyway. But for some reason I couldn’t. I opened the door, but as it chimed, I heard the sound of a chair scraping along the floor.

“You said you had a proposal for me.”

I released the handle and let the door swing shut.

It chimed again, and I swiveled around, forcing a smile that made me feel like a con-artist. I took a deep breath, trying to rid myself of the confident facade—my survival tactic—and be as genuine as possible.

Selma held out an upturned hand toward the chair opposite her. “Please. Sit. Tell me.”

I sat down, hugging my backpack to my chest, staring at my half-eaten danish on the table. My mouth watered. I really wanted to finish it.

“I was wondering if you’d be interested in a tit-for-tat,” I said. “For a few food items every day, I would bring you clientele, and continue to do so until you wished to terminate the agreement.” I tried to be as articulate as possible. I wasn’t really used to it, but Selma seemed so articulate herself, I thought she might see me as a dumb aimless juvenile if I didn’t. You might think that’s hard to imagine looking at me now, but trust me when I say that despite being self-educated in PreGlobe culture and history, being street smart when I needed to be, and making the best of whatever was available, one vital element I lacked in life was social etiquette. That was a lesson I should have learned from birth, not at fifteen when I was expected to move out of my home and have a child. Not when I was hit all of a sudden with adult responsibilities and a completely new way of life.

Eve, I know. You look confused. You probably have more questions. But I’ll answer those later.

Back to me asking for a tit-for-tat.

Selma nodded and flattened her hands on the table in front of her.

Selma nodded the same way again, staring down at her hands as if this information had no impact on her decision process at all.

She didn’t move or say a word for ages. I could hear the air travel through my nose it was so quiet. I thought maybe she had slipped into a meditative state.

“I can give you a loaf of bread every day. And two pastries.” She hesitated. “And a liter of freshly squeezed juice. But you can’t be fussy about the juice because I can only get what’s at the Sparket that day.” She paused and stared at me in a way that suggested she was trying to size me up. “I don’t shop at the Underground during the week. There are always WarDens fining people.”

“Wise.” I said it a little too loudly, and cleared my throat. “I can guarantee you at least one new customer per day. Would that be sufficient?”

I was taken by surprise. No? I didn’t know if I could get her more than one new customer a day. I had never managed that kind of consistency before. And if I didn’t keep it consistent, would she renege? It’s happened to me before and I was left scavenging food off my stingy neighbor for over two weeks.

Then the most unexpected thing happened.

Selma reached out to me, took my hands, and turned them over so that my palms were facing upward.

She stared at my tattoos. Motionless. On my other wrist, I had the Four Blessings symbol.

“I don’t need customers,” she said, after a few moments had passed. She looked up, and a tear slid down her cheek. “I just need someone to talk to.”

I swallowed. That tear spoke of a hardship I knew absolutely nothing about. This woman seemed to have it all. But I was basing my opinion merely on her appearance and her way of speaking. Maybe she was like me. Maybe all this was just a front to get by.

So I just nodded.

At that moment in time, Eve, it seemed the only appropriate thing to do, don’t you think?

Jessica Bell is an Australian singer-songwriter for Keep Shelly in Athens, Mongoa, and BRUNO. She is also an author, writing and publishing coach, graphic designer, and the publisher of Vine Leaves Press. Read more about her at iamjessicabell.com.