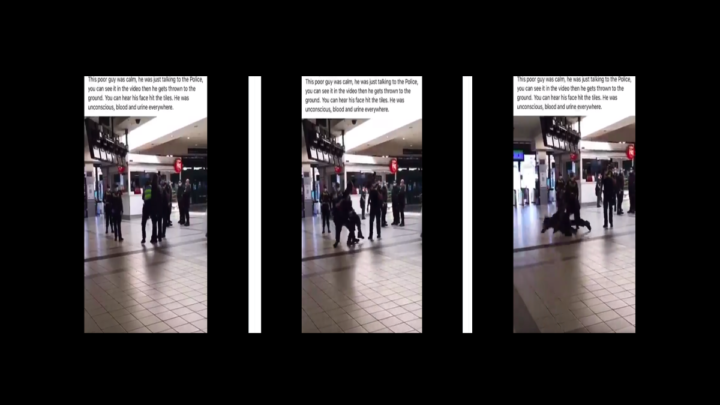 In amongst all the footage of this week’s Melbourne protests, a horrific video has emerged of a police officer approaching a man from behind and violently throwing him head first to the ground at Flinders Station in the CBD – in an attack that had the potential to prove fatal.

The man is standing alone and talking to police officers, when an officer approaches him from behind, grabs him by the shoulders and violently slams him against to the hard floor.

Witnesses reported that the man was knocked unconscious, and left in a pool of his own blood and urine.

The Chief Commissioner of Victoria Police, Shane Patton, confirmed that police are currently reviewing the footage and that an internal investigation is underway. At the same time, Mr Patton says his officer were by and large “responding proportionately in an environment that was dynamic, threatening and frightening.”

“I couldn’t be prouder of them. What they’ve done and the way they’ve conducted themselves,” he stated.

“Of course there’ll be incidents that appear, or may be inappropriate, but any of them that are, we will fully investigate”.

The Victorian system of investigating police complaints is similar to that used in New South Wales.

The Independent Broad-Based Anti-Corruption Commission (IBAC), which is the oversight body, may investigate serious allegations of police misconduct, including failing to act consistently with Victoria Police policies and procedures, behaving disgracefully or improperly (on or off duty) and discrediting Victoria Police or its personnel.

But like the Law Enforcement Conduct Commission (LECC) in New South Wales, the IBAC is chronically under-resourced and has no power to discipline let alone criminally prosecute police officers – it can only make recommendations, which may or may not be followed by police or the DPP.

Victorian Premier Daniel Andrews has also praised police officers for their actions over the past few days.

However, there are concerns about the announcement by police that they will be ‘less tolerant’ of protesters going forward. This follows the broad use of tear gas, pepper pellets and stinger grenades against protesters, and it is unclear as to what this reduced tolerance will entail.

Keeping the peace, and ensuring public safety are one thing, but forcefully throwing a man to the ground is another entirely, particularly when he has been grabbed from behind, and has no ability to defend himself.

In fact, both in New South Wales and in Victoria, police are only empowered to use such force as is reasonably necessary to perform an arrest – anything beyond this amounts to the criminal offence of assault.

Hundreds of protesters have been arrested and charged with criminal offences over the past few days in Victoria.

More than 200 people were arrested on Wednesday alone, after a stand-off with police at the Shrine of Remembrance.

Two police officers were allegedly struck in the head with bottles during the protest, while another was admitted to hospital with chest pains.

Journalists, too, have been caught in the crossfire of aggression between both protesters and police and are now heavily relying on being able to take footage of the protests from the skies.

But police have insisted on making the skies above Melbourne CBD a no-fly zone.

Permissions was granted by the Civil Aviation Safety Authority yesterday, which will allowing police helicopters to fly, but not media crews.

The ABC, Nine News, and Seven Network are now trying to have this decision repealed until a full hearing into the matter can be heard in the courts.

Police and CFMEU authorities are searching through social media footage to identify protesters, who they say, will be held accountable for their actions. At least one worker has already been fired after attending Monday’s violent protest outside the CFMEU headquarters in Melbourne, and he has accused the construction union of pressuring his employers to lay him off.

The CFMEU, and Police both claim that the protests have been hijacked by far-right activists who are escalating the violence and further inciting protesters.

The rest of Australia is looking on in horror.

Extended lockdowns have undoubtedly created a pressure-cooker environment in Victoria — people are incredibly frustrated by months of restricted movement, curfews and business closures. Tensions are high, emotions too.

And there is currently no clear end in sight, although like the NSW Government, the Victorian Government maintains that the path to returning freedoms is contingent on high vaccination rates.

Along with the recent mandate for construction workers, the Victorian Government has also announced that early childhood educators are likely to be next on the list of workers to be subjected to ‘no jab, no job’ directive.

Seeing the streets taken over by angry mobs is unlike anything we’ve witnessed before in Australia, and given the serious divisions in our community that has been created by the mandated vaccination debate, it’s likely that we could well be seeing more as people stand up for their democratic right to personal choice.