In A Year of Utter Madness One Thing Is Certain: New South Wales Health Minister Brad Hazzard Has To Go 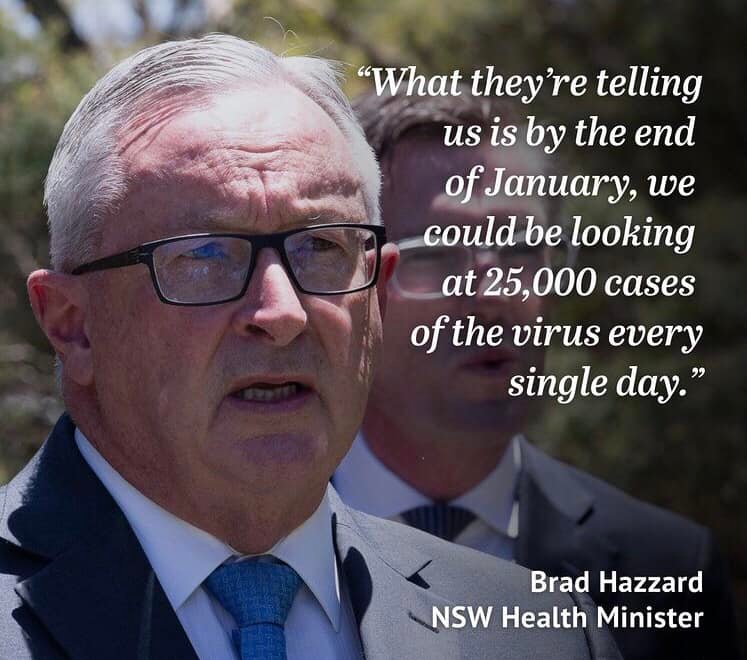 With TOTT News and A Sense of Place Magazine.

Millions of citizens of Australia’s most populous state have had their lives and businesses destroyed or profoundly disrupted throughout the madness, the sheer unadulterated insanity, of 2021.

Front and centre of this debacles has been the increasingly crazed figure of Health Minister Brad Hazzard, whose deranged posturing and spit flying authoritarian drivel has done much to discredit not just the state’s political class but the medical and bureaucratic edifices backing or refusing to speak out against the wholesale disruption of the state’s economy.

Referencing ‘modelling’ from epidemiologists during a press conference, Hazzard said the ‘reproductive rate of the virus’ was more than 1.5, with numbers close to doubling every three days.

Hysterically, of course, “Omicron” is an anagram of “moronic”, making every sceptic on the planet laugh.

Hazzard’s fear mongering is set against the backdrop of a spate of excoriating books dismembering every aspect of the Covid narrative, most notably over the past month Robert F Kennedy’s riveting book The Real Anthony Fauci, and former New York Times journalist Alex Berenson’s Pandemia: How Coronavirus Hysteria Took Over Our Government, Rights, and Lives, both of which have been dominating the Amazon best seller lists.

In other words the sceptics are well out of the closet; and everyone now knows the shocking fraud behind the yarn, not least of all the world’s military and intelligence agencies.

Governments, including Australia’s state and federal governments, have been left stranded with a credibility gap so wide it is impossible to jump over.

But still they continue on.

Hazzard says at this rate, by January, New South Wales may reach 175,000 cases per week:

The principal problem for government’s attempting to maintain credibility through this period is that much of the information, and the forecasts they are relying upon, repeatedly shown to be wildly inaccurate, are resourced by the Bill Gates funded World Health Organisation, around which daily swirl ever greater controversies.

For instance, Professor Marylouise McLaws, which both the New South Wales government and compliant journalists have relied on for their “expert” commentary and justification for their actions, is extremely closely intertwined with the World Health Organisation; and thereby with funding from Bill Gates, who is heavily invested in vaccines.

It is a process known as regulatory capture on the one hand, and buying influence on the other, and has had a severe influence on Australia over the past two years, with a “bought” sign hanging from the necks of many of the establishment figures the public once trusted.

Brad Hazzard has just declared: “The simple maths … is by the end of January, we could be looking at 25,000 cases every single day.”

This is the same Brad Hazzard who only a few months back provoked derision or mirth for declaring: “This is the New World Order.”

That’s right! Despite the majority of the state being double-vaccinated against the ‘invisible enemy’, we may soon see the highest case rate ever recorded in the state!

The NSW government is claiming that 93.4% of the population has been fully vaccinated.

Yet here they are, despite all the false promises of the past two years, just download the app, just stay home for a fortnight, just wear a mask, just socially distance, just take “the jab”, continuing to claim record numbers.

Hazzard’s inflammatory posturing came on 15 December, the day that, at long last, segregation of the unvaccinated from many activities, including going to to pubs, restaurants and large stores, finally ended and millions of people cheerfully threw away their hated masks. “Freedom Day” it was dubbed, a concept which is anathema to the country’s power drunk politicians.

Adding to the stench is the fact that Hazzard’s former boss Gladys Berejiklian resigned after being faced with still unresolved corruption charges.

The public have been kept in the dark over all the garbage policies visited upon the country over the past two years, with everything from the justification for curfews to the vaccine contracts all kept secret.

Surely the public has a right to know why their lives have been so viciously disrupted or destroyed.

As with so much else in this period, Australia’s legal system has proved unfit for purpose, and provided no protection to the citizenry against authoritarian excesses:

Where does Hazzard gets his wild numbers from?

Remember, Hazzard has publicly stated the government will not release their modelling.

We went looking for this so-called modelling from the University of NSW, but couldn’t find it.

The only thing we could find regarding projections of increased rates during re-opening was the following page by Australia National University in August 2021:

It says: “The researchers argue that at least 90 per cent of all Australians, including children, must be vaccinated against COVID-19 before fully relaxing public health measures and opening the international border.”

However, when one goes to click the hyperlink attached for “new modelling”, nothing is found:

That’s right, the modelling to make these claims has been deleted.

The more you look into the ‘sources’ of many claims made, the more you find they do not exist.

The government’s favourite institute, the Doherty Institute, which receives substantial funds from both the Chinese and the Melinda and Bill Gates Foundation, was originally predicting up to 150,000 deaths, a prediction which justified, at least to Australia’s politicians, the wholesale destruction of the economy and the society.

The Doherty Institute is the same organisation which the government relied on for its cascading claims that society could reopen at 70, 80 and then 90% vaccination rates.

Which of course is how, after achieving these “goals”, is why we’re now seeing record case numbers; using a test which has been widely criticised as unfit for purpose.

Twenty one months on the death toll has just passed 2,000. Australia sees up to 3,000 deaths a year during a normal flu season, for which we do not rearrange the entire society.

One extreme policy position after another has been adopted with shady ‘justification’ behind all of them.

That’s if we can even believe their statistics, or the PCR testing that underpins the process.

The Covid story is collapsing. The internet swirls with horror stories of government overreach and vaccine complications,. Many of the sources, far from being conspiracy theorists, are well qualified professionals.

In September, New South Wales finally reclassified death statistic methodology to document how they had been including “died with COVID” on certificates:

The propaganda machine rolls on, even with less than a week to go until Christmas. Have fun trying to get into Queensland for a well earned break in some blessed tropical location.

Meanwhile, New South Wales Chief Health Officer Kerry Chant, has urged urged residents in the state to ‘limit’ their activities over the Christmas period as ‘cases skyrocket’ and the ‘Omicron variant spreads in the community’.

We am not kidding when I say this is indefinite disease warfare.

Australians await the short-lived false freedom in NSW to quickly come to an end in early 2022, as once again the ‘science changes’ and new measures must be taken for ‘protection’.

Perhaps those with ‘eyes to see’ where this is heading take the easing of restrictions to get your future affairs in order.

It is time for family, yes. But perhaps the future of your family name depends on how you act during each cycle of limited freedom.

The language suggests authorities are already gearing up for more fearmongering to continue.

Yet, will anyone notice when these huge numbers don’t come to pass?

Transfixed, bemused, confused, the public has largely switched off; or as the millions of people who have taken to the streets in the past few months amply demonstrates, no longer believe the government narrative.

At the same time, many thousands of the nation’s police, nurses and teachers are quitting their jobs for the simple reason that they do not believe the often repeated claim that the vaccines are safe and have a high level of efficacy.

This is a pivotal point in history: the end of American empire, the end of all credibility as this story has been foisted upon populations worldwide.

Only some are Watching the Watchers. Only the scribes take note for the benefit of the sages, saints and historians of the future. Only some are on the right side of history.

For many of us, all we can do is watch the once much loved country of Australia implode. And with it, the credibility of everyone who did not stand up and say: “Enough is Enough. You cannot lie to us anymore.”