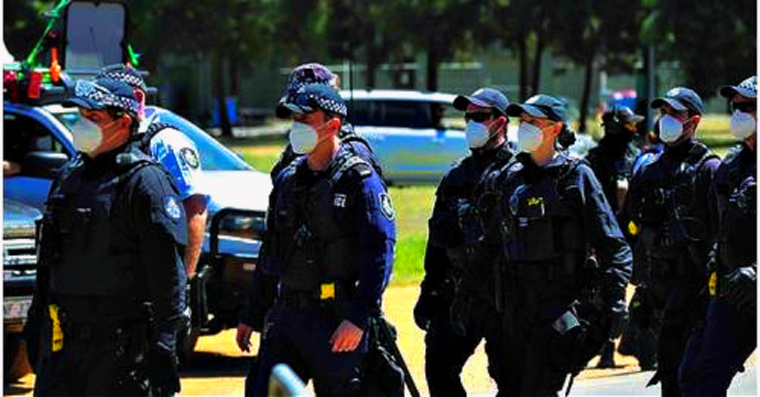 What had been a remarkably successful policing operation, handling the one million protestors who showed up in Canberra to protest two years of government overreach during the Covid era, turned sour in the final hours.

Until that point there had been no reports of violence, rapes, vandalism or all the other behaviours one might fairly expect with such a wildly diverse and yes, angry crowd.

Although the crowd was unmasked, and certainly weren’t lining up to QR code in, the authoritarian derangement and violent police excesses the nation has become accustomed to were nowhere to be seen.

Australians are extremely slow to protest; but with millions having lost their jobs, their businesses, even contact with their families amidst deep social divisions created by being daily threatened or ostracised if they do not take “the jab”, they are silent no more.

The hands off policing which had characterised both the protest and the handling of the 200,000 campers at Camp Epic, only one of a number of campsites, were largely peaceful because the police did not seek confrontation.

That all ended on the 14th of February, 2022, two days after a million people marched on Parliament House in jubilant unity.

The putative and publicly squabbling leadership of the movement at Camp Epic did nothing to dispel tensions. And all of them disappeared on the penultimate day, leading to yet more fear and confusion amongst the thousands who remained on the site itself, including many with children who had no jobs and no homes to return to.

All the rhetoric from various members of the movement that they were there “until the job is done”, or “until this is over”, proved as substantial as smoke.

The social chaos and personal crises wrought by the blizzard of government diktats and authoritarian overreach of the past two years is now clearly evident.

Camp Epic was already rapidly emptying on the final day when police moved in and aggressively moved every last protestor off the site.

In the inflammatory leadup, sowing yet more tension and confusion, protestors were initially told that they would have to move on by midnight. One woman with two young children said people had come to her tent early in the evening and told her she would be bashed and arrested if she did not move on.

The woman did not have a car and had no way of complying.

The next rumour in this evolving drama was that campers had until 8am to comply.

As it turned out the police arrived in force at around 11am, repeatedly broadcasting the message: “Leave Now. You are trespassing. Leave immediately. If you do not leave you will be arrested.”

Police, tolerating no resistance, worked their way through from the showgrounds from the top camping ground until every last protestor had been evicted.

The irony of police aggressively moving demonstrators from the nation’s capital, ostensibly the heart of Australian democracy, was lost on nobody.

As more than 98% percent of protestors had already left, and of the holdouts most were already packing up to leave, it was a largely pointless show of force.

In one of those all too human moments, one protestor pleaded with the police: “Don’t vax your kids.”

One sign, emblematic of the passionate sincerity of protestors, read: “Touch Our Kids & It’s War.”

While from a policing point of view the dissolving of Camp Freedom may well be deemed a success and end up as a textbook model for policing in highly volatile situations, it has also left many questions over its inhumanity and deceptive nature.

Every last protestor moved on yesterday has one message in their head: “The government is my enemy.”

Campers were told multiple conflicting stories. They could move to a large holiday camp an hour outside of town; that they could move to another Council controlled camping ground Camp Cotter at Cotter Creek half an hour away; or that they would be safe and welcome to stay on Ground Seven, at the top of the Epic showgrounds.

In the dramatic unravelling, none of these stories, or deliberate falsehoods, turned out to be true.

The hundreds of people who moved up to Ground Seven on the understanding that as it was private property they would be safe to stay were easily kettled, or corralled, given no choice but to leave after more than 50 police entered the grounds with backup forces clearly evident behind them. While many wore the standard uniforms of local police, there were other heavily armed special operatives wearing masks and holding leashed dogs, adding to the fear and panic already spreading through the crowd.

Amid these surreal and frightening scenes, it was obvious that a few of the officers were enjoying their role perhaps “a little too much”; but that many were unhappy about the duties they were being asked to perform.

In the midst of this chaos, some of the younger officers in particular, were exceptionally polite, thanking the protestors for their cooperation.

Many protestors moved to Cotter Creek Campground, a council run venue, on the assurance that they would be safe and welcome there.

That also proved false, with police aggressively moving protestors on, despite the fact that they had already made bookings and paid for their visit.

Another suggestion that protestors could move to a large conference and adventure centre Caloola Farm, an hour outside of Canberra, provided free of charge by the sympathetic owner, also proved false.

Police blockaded the roads and refused to let protestors enter.

Owner Ralph Hurst-Meyers, well known for his community generosity, said: “After consultation with the authorities, Caloola Farm and the Hurst-Meyers Charity Limited will allow vulnerable people affected by recent events such as the elderly, the disabled, and the indigenous community, single mothers with children, vulnerable families with children to temporarily stay at Caloola Farm free of charge while they make preparations to return home.

The problem with that, of course, is that many of the remaining protestors have no home to return to.

As one of the many passionate people involved in the weeks events observed: “Everyone here is on the verge of losing everything.”

A million people on their doorstep has upset the smug disdain displayed towards the largely working class protestors by Canberra’s insular, well paid public servants and their political overlords.

But as the many Australians who are refusing to accede to the government’s vaccine mandates burn through their savings and resources, the social chaos inflicted on Australia’s working and middle classes by the Canberra elites can only intensify.

The authorities may have succeeded in moving the protestors on this time around, but this story is going nowhere.