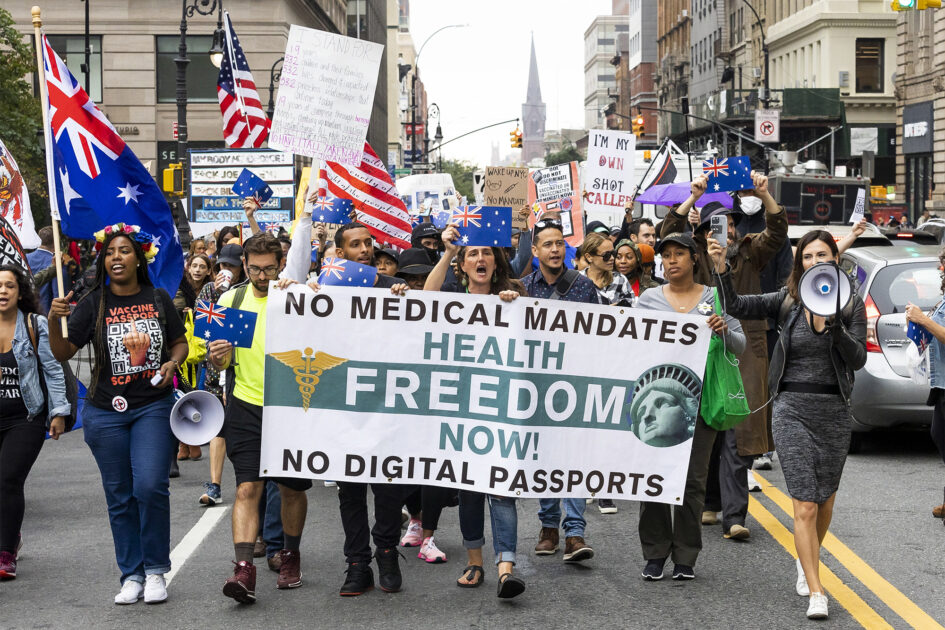 While the heavily manipulated mainstream media has been filled wall to wall with climate alarmism, out in the real world thousands of Australians are being forced to leave their jobs in tears because they refuse to have “the jab”.

Mandating a vaccine which is yet to receive final regulatory approval, which has cost the public purse billions of dollars in secretive deals, and whose efficacy and dangers are entirely controversial, has provoked demonstrations not just in Australia but around the world.

If you listened to the mainstream media, you would have no idea anything was going on.

The public square has to be filled with something, and these days it’s impossible to turn on the radio without hearing yet another climate change story. If it’s not a blizzard of Deep State bullshit, then it’s malign, insidious and destructive. Take your pick. You cannot ignore what is happening in the homes and streets of your own country forever; the nation’s media cannot ignore their social responsibilities forever, surely.

But so it would appear.

Australians have grown weary of the madness of ineffective lockdowns and disgusting yet daily sight of preening politicians pretending they have saved us all. But as the country finally opens up, the government push for vaccination grows ever more intense.

Elite opinion was always against lockdowns. It was the embrace of lockdowns by an uneducated public and their amoral, self serving political class which turned Australia into the most locked down country on Earth.

Now we’re seeing the same divide over vaccinations, with elite opinion sounding major alarm bells, while politicians shout ever louder, as if they were herding cattle.

Here’s a good example, in Spectator Australia, from the formidable intellect of Rebecca Weisser:

But the reality of overseas experience with vaccines, the basic no brainer of doubting a convergence of Big Tech, Big Pharma and Big Government, is failing to sink in to Australia’s political class.

Indeed they never let up:

One of the single most appalling thing about the Australian government’s refusal to step back from the abyss of its own making, a kind of political Rake’s Progress of the modern era, has been the mandating of vaccines for workers, leading to massive disruption across multiple industries as people in their thousands refuse to surrender their individual sovereignty.

The blind leading the blinded, the Australian government cannot even look up from its own navel gazing self destruction long enough to notice that mandating vaccines is causing protest and chaos around the world.

The algorithmic downplaying of these demonstrations at the behest of governments ensure the population remains blinded by their politicians and mired in ignorance. It really should not be. It is all leading straight to the pit; to immense social dislocation, and to an era of great suffering.

Will they not step back from the edge of the abyss?

Here’s a small sampling from the past fortnight.