Australia’s Oldest Dinosaur was a Peaceful Vegetarian, Not a Fierce Predator 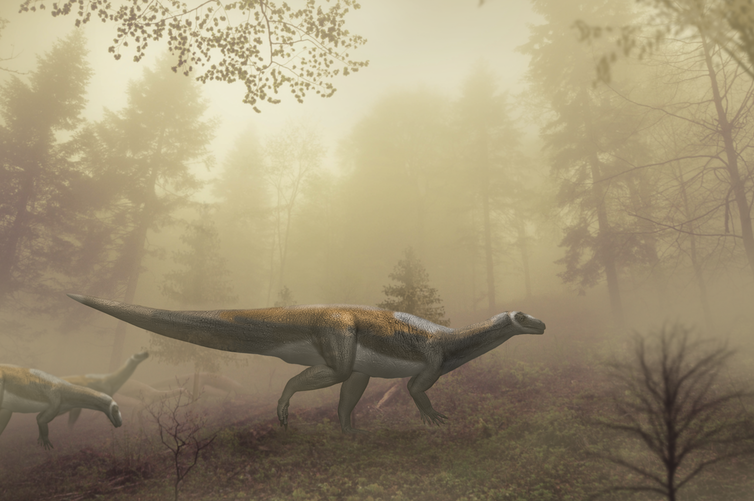 Steven W. Salisbury and Anthony Romilio, The University of Queensland.

Ipswich, about 40 kilometres west of Brisbane, seems an unlikely place to find dinosaur fossils. Yet the area has produced the oldest evidence of dinosaurs in Australia.

A fresh look at these fossils now reveals they aren’t what they first seemed, and it’s prompting us to reconsider how the story of Australia’s dinosaurs began.

In research published today in Historical Biology, we reanalyse a sequence of 220-million-year-old tracks from the Ipswich Coal Measures, thought to have belonged to a carnivorous dinosaur.

We show they actually belonged to an early sauropodomorph — a distant relative of the plant-eating sauropods that roamed the planet much later, during the Jurassic and Cretaceous periods. This is the first time fossil evidence of early sauropodomorphs has been found in Australia.

The Ipswich area was once the principal source of coal for Queensland. Its suburbs including Ebbw Vale, New Chum and Swanbank were dotted with underground mines during the late 1800s and the first half of the twentieth century.

These mining operations involved the creation of deep shafts and tunnels, from which miners could access deposits of coal sandwiched between other layers of rock. Some tunnels would descend hundreds of metres below the surface.

The coal would be removed from the seam by hand, and pillars were left in its place to support the ceiling of the resulting underground “room”. It was difficult and dangerous work.

In 1964, miners working at the Rhondda colliery in New Chum made a startling discovery. As they removed the coal from a seam they were following 213 metres below the surface, a series of giant, three-toed tracks became exposed in the ceiling of the mine shaft. For the miners, it was as if a dinosaur had just walked over their heads.

These tracks remain the oldest-known dinosaur fossils in the entire continent. They’d been made by a dinosaur walking across a layer of swampy vegetation, which would be extracted as coal 220 million years later. Buried under fine silt and mud, they’d been preserved as natural casts.

It had been assumed some type of predatory dinosaur made the tracks. The only problem was the footprints were reportedly about 40–46 centimetres long. This would suggest the track-maker was just under 2m high at the hips.

This isn’t necessarily large for a theropod such as Allosaurus fragillis, which was about this size. Tyrannosaurus rex was even bigger, with a hip height of about 3.2m.

Was something unusual afoot in Australia during the Late Triassic?

As part of a broader review of Australian dinosaur tracks, we decided to take a closer look at the Rhondda colliery tracks. The mine has long been closed, so the original tracks are no longer accessible, but archival photographs and a plaster cast are held at the Queensland Museum.

Dispelling the myth of the ‘Triassic terror’

Using the photos and cast, we created a 3D digital model of the track to allow a more detailed comparison with other dinosaur tracks from around the world.

Our study revealed two important things. First, the footprints were not as big as initially reported. Excluding drag marks and other unrelated surface features, they are close to 32–34cm long (not 40–46cm as previously documented).

Second, the shape of the footprints and the sequence in which they were made is more consistent with early sauropodomorphs. Sauropodomorphs were the distant relatives of the lumbering sauropods of the Late Jurassic and subsequent Cretaceous Period.

The towering Triassic terror of the Ipswich Coal Measures was no more. In its place was a peaceful plant-eater.

The remains of early sauropodomorph dinosaurs have been found in Upper Triassic rocks, aged between 220 million and 200 million years, in continental Europe, Argentina, Brazil and South Africa.

And by the start of the Jurassic, 200 million years ago, they had achieved a near global distribution, with fossils in North America, China and Antarctica. This isn’t surprising, given the continents at the time were still connected in a single landmass called Pangaea.

Our new interpretation of the Rhondda colliery tracks shows early sauropodomorphs lived in Australia, too, and that Australia’s first dinosaurs were friendlier than we thought.

Read more: The march of the titanosaurs: the Snake Creek Tracksite unveiled