Where The Bloody Hell Is It? Did Scott Morrison Lie About the Report that Saved His Bacon at Tourism Australia? The Best Of 2020. 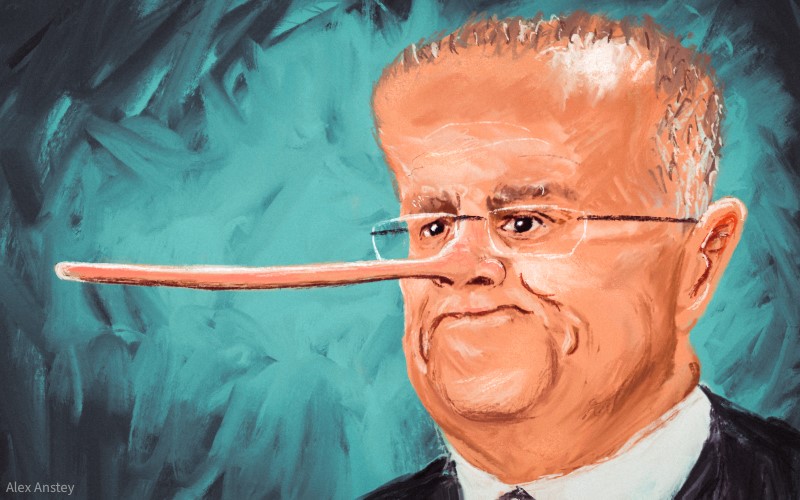 Scott Morrison was sacked as managing director of Tourism Australia in 2006 with a year left to run on his contract. For 14 years the reason for the sacking has remained one of the best kept secrets in Parliament. Now, FoI documents accessed by Jommy Tee reveal the PM either lied about a critical probity report, or numerous government departments and agencies are so incompetent that all of them – together, coincidentally, jointly and severally – lost it.

Scott Morrison was sacked as managing director of Tourism Australia in 2006 with a year left to run on his contract. For 14 years the reason for the sacking has remained one of the best kept secrets in Parliament, with the Liberal tourism minister at the time, Fran Bailey, never revealing what led to the sacking of the man who went on to become Prime Minister of Australia.

There has been considerable conjecture, but it is clear that the lack of transparency and accountability surrounding the $180 million tourism campaign – the oft-ridiculed “So where the bloody hell are you?” – and the awarding of a contract to M&C Saatchi played a key part.

The campaign’s tender process was heavily criticised by the advertising industry, with players bemoaning that the tender criteria were skewed towards a particular agency.

Following repeated calls by the opposition for more probity, word leaked to the media that KPMG had been called in to conduct a “probity audit”. The Age declared that KPMG had been hauled in to “give an impression that the selection criteria is kosher”.

No media release announcing KPMG’s appointment as probity auditor exists in the archived websites of Tourism Australia, the department of industry, and that of the minister, Fran Bailey.

However, the plot has thickened considerably with FoI documents obtained this week by Michael West Media revealing that the probity report supposedly conducted by KPMG, a report that Scott Morrison repeatedly used to shield himself from attacks over the awarding of the $180 million contracts, cannot be found anywhere.

Moreover, Tourism Australia was unable to find any emails, briefings or tender documentation associated with a probity audit into the M&C Saatchi contract.

What Morrison told the Senate

Morrison, in his role as managing director of Tourism Australia, told Senate estimates on 2 November 2005 that the KPMG probity audit was “an internal document that has been provided to our Board. I am sure there are the usual provisions for making requests for those types of documents”.

Morrison said he would take on notice the request to provide the report – subsequently, he said that the “report is considered commercial in confidence”.

Michael West Media contacted KPMG and numerous government agencies to hunt down the mysterious probity report, but it simply cannot be found.

This leaves us with two possibilities.

The search for the probity report

KPMG advised Michael West Media that it did not comment on “client deliverables”. However, it added: “This reference goes back many years and while we can confirm we have provided services to Tourism Australia, we cannot confirm we completed the report.”

Tourism Australia advised that no probity audit document could be located. The agency advised it was “satisfied that there were no documents within the scope of your request in the possession of Tourism Australia”.

Tourism Australia even contacted the National Archives of Australia, which confirmed that no such document existed in its archives.

The industry department, after a thorough search, refused our FoI request on the basis that document could not be found.

The Minister puts her foot down

The M&C Saatchi contract term was for three years but it had to be reviewed annually. Tourism Australia’s tender process fell behind schedule, meaning that by the time it was finalised, the minister, Fran Bailey, was virtually shoe-horned into signing off on the first tranche of the contract. If she had not done so, Tourism Australia would have had no international marketing presence in 2005-06.

Due to the significant criticism surrounding the awarding of the contract, Bailey demanded greater accountability for the second tranche of negotiations. She wrote a blistering letter to Tourism Australia on 29 June 2006 seeking reassurance and copies of any internal assessments:

“I need to be reassured that the taxpayer is receiving value for money with these substantial investments. I understand that an internal evaluation of performance is under way at the moment, but will not be complete until mid-July. I also understand that no independent evaluation has yet been undertaken. In order for me to make a properly informed decision on these contracts for the full 2006-07 financial year, I request Tourism Australia provide me, by 31 August 2006, with:

Given that Bailey wanted the independent evaluations within two months it came as a surprise when four weeks later, Tim Fischer, Tourism Australia’s chairman, announced on 26 July that Morrison would be departing the organisation, having been sacked.

The tender process of the $180 million advertising contract was the subject of eight internal and external reviews, including one conducted by the Australian National Audit Office (ANAO) in 2008 – three years after the contracts were awarded and two years after Morrison was sacked.

The audit did not reference the KPMG probity report and indeed the ANAO found that no probity adviser was engaged for the creative development and media procurements (successful bidders: M&C Saatchi and Carat respectively).

Tourism Australia told the ANAO that “no probity inquiries were undertaken for these procurements” as part of the request for tender process.

As part of the evaluation process for the tender the ANAO states a probity adviser was appointed, following intervention by the Department of Prime Minister and Cabinet. Bailey had raised her concerns about the tender process with DPM&C. However the role was filled internally, by a Tourism Australia manager, and not an arms-length organisation.

The ANAO was highly critical and scathing of the tender process run by Tourism Australia when Scott Morrison was in charge, finding among other things:

The national audit office’s concerns over conflicts of interest appear valid as the engagement of KPMG represented a significant potential conflict of interest for both Scott Morrison and the deputy chairman of the Tourism Australia board, Tony Clark.

Morrison had a short-lived stint in 2000 at KPMG Consulting, although this is not listed on his parliamentary biography, but archived internet records show that he worked for KPMG’s tourism and leisure division.

Tony Clark was KPMG’s long-time NSW managing partner (he stepped down in 1998). Clark was simultaneously serving as deputy chairman at Tourism Australia, a position he had long held at TA and its predecessor the Australian Tourist Commission.

What the national audit office found was a carbon copy of the criticism that a 1999 New Zealand audit report had levelled at Scott Morrison when he was head of NZ’s Office of Tourism and Sport.

Morrison had moved to NZ in 1998, reporting directly to the NZ tourism minister, as the inaugural director of the office. The NZ minister, Murray McCully, and Morrison were locked in a power struggle with the independent NZ Tourism Board.

The NZ audit office report devoted a whole chapter to Morrison’s deceptive behaviour, which involved changing the focus of a consultant’s review to align it with Morrison’s political agenda and without conferring with the board or his minister.

Morrison mysteriously departed the NZ Office of Tourism and Sport one year before the end of his contract term.

Morrison’s disdain for transparency and the shirking of accountability, so evident during his tenure at Tourism Australia, persists to this day, with his continual deflecting and “move along, nothing to see here” attitude to journalists asking questions.

Given the importance of the KPMG report the question can surely be posed “So where the bloody hell is it?”

Detailed questions were put to the Office of the Prime Minister. If or when a response is forthcoming, it will be appended to this story.

Author Jommy Tee is a long-time career public servant, having worked in the policy development field for 25+ years as well as an independent researcher interested in politics, current affairs, and Nordic noir. You can follow Jommy on Twitter @Jommy_Tee.