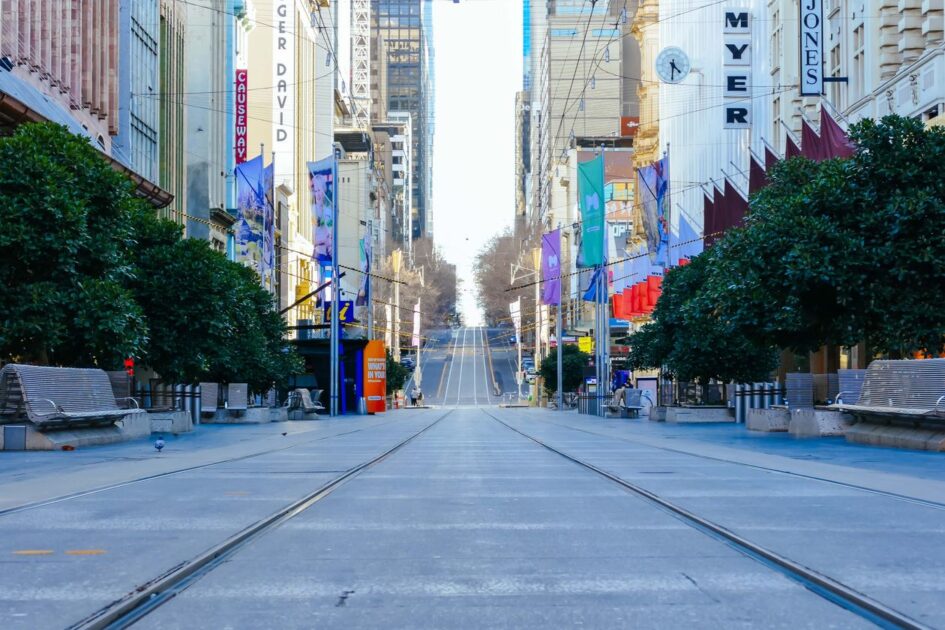 So goes the most basic maxim of medical practice.

Yet many hundreds of Australian practitioners have done exactly that, with senior health bureaucrats standing side by side with the nation’s grandstanding politicians as they impose draconian, counterproductive lockdowns.

On 5 October, The Australian’s economics editor Adam Creighton wrote: “In the first six months of the year, there were 134 fewer deaths from respiratory diseases in Australia, which includes pneumonia and influenza, and 617 additional deaths from cancer compared with the average over 2015-19, according to the ABS’s provisional mortality statistics.”

And this is just cancer.

Does the AMA accept any responsibility for this perverse outcome?

How many other avoidable killer ailments have gone undetected because the AMA has given medical cover to the politicians’ fixation on coronavirus to the criminal neglect of other deadly illnesses?

Frequently changing rules, grotesque exaggerations on the dangers of Covid-19 and poor political messaging have all sown panic and confusion in the Australian population, frightening terrified people into not seeking early consultations, screenings and treatments.

Outrageously, members of the Australian Medical Association have been front and centre of the disaster.

Australians have an unquestioning and exaggerated respect for doctors.

The sight of government medical officers stepping up to the lecterns in lockstep with the nation’s politicians has lent credibility to some of the most truly absurd dictates this now benighted nation has ever seen.

The most shameful performances have been preserved for the nation’s Chief Medical Officers, who have allowed themselves to be used for the grandstanding tactics of politicians while ignoring some of the world’s leading intellects who are questioning in the bluntest of terms the veracity of lockdowns.

The AMA now finds itself increasingly compromised, with a significant number of its members implicated in the biggest social and financial meltdown in Australian history and the implementation of dangerously misguided policies under the guise of a public health emergency.

At the same time, increasing numbers of their members are speaking out against lockdown policies and the AMA’s complicity in them.

Australians have seen the squandering of eye watering amounts of money by the government, the quintupling the national debt, the throwing millions of people on to the dole queues and truly shocking scenes of police brutality on Melbourne’s streets.

And all this destruction of the country has been accompanied by a pantomime of health bureaucrats having their moment in the sun, or more precisely the television cameras.

The problem with Australia’s public service is the same as with all bureaucracies, they reward conformity while discouraging creativity and original thinking as a threat to the comfort’s of their taxpayer funded status quo.

Rather than encouraging outliers, people who “think outside the square”, those who rise to the top of health bureaucracies have inevitably got there due to their obeisance to the government agendas of the day.

Members of the Australian Medical Association have been front and centre in sowing this panic and lending plausibility to political and government agendas being shoved down the throats of the general public under the cover of Covid.

These include, most egregiously, the advancement of mining interests after Prime Minister Scott Morrison appointed his good friend, millionaire mining executive Nev Power, to head the Covid Commission.

An outspoken critic of lockdowns and a member of the Australian Medical Covid Network Dr Guy Campbell has implored the AMA to stop supporting hard lockdowns before its’ reputation is blighted, “which it will be”.

“The AMA has opened up to the non Covid 19 consequences of Government policies on Covid 19, so it begs the question then why the AMA still supports hard lockdowns?”

In an Open Letter to the AMA Dr Campbell makes the following points:

More and more countries are coming round to accepting we may have to learn to live with the virus as the health and economic costs of repeat lockdowns are too high to be justified.

As the costs start to bite widely and the pain is felt, people will look for targets to blame.

Politicians are adept at blame shifting and the medical community may suffer high reputational damage.

The AMA should pre-empt this by starting to distance itself by not supporting hard lock downs and saying publicly that they provide the medical expertise and advice, it is for governments to make and implement policy with a balance of health, social and economic policy.

Unfortunately for the AMA, the warning has come too late.

We have already entered the Era of Recrimination, as Steve Waterson at The Australian demonstrated with his prominent piece “An Epidemic of Stupidity”. He wrote: “We’ve handed control of our lives to a clown car packed with idiots who have wasted billions trying to defeat this virus. They will never admit it was all for nothing.”

In a response to Dr Campbell’s concerns the Association claimed:

“The fact is that the credibility of the AMA is not in doubt and we are not particularly concerned at this point given the broad community support for the lockdown among Victorians, with the latest poll showing that even 57% of Coalition voters support the lockdown.”

That, with all due respect, is an absurd response.

To make as your greatest defence the fact that a poorly educated population such as Australia’s can be successfully manipulated into believing a scare campaign based on false hope and inaccurate date is patently ridiculous.

The mob are notoriously fickle.

As one of Australia’s most distinguished academics, Emeritus Professor at the Australian National University Ramesh Thakur has noted:

“A clear divide is emerging between health bureaucrats and ‘ivory tower’ modelers, on the one hand, and clinical practitioners and GPs, on the other.

“The former are the most hawkish lockdown advocates and supporters. The latter are the ones who are seeing and having to deal with the unintended, perverse and growing health and mental health consequences of lockdowns.

“It is astonishing the extent to which the theoretical scientists and health bureaucrats remain in denial about the health damage of their policies and in violation of the Hippocratic Oath.”

Do No Harm!!!! Yet while the intellectual argument for lockdowns has been lost the Australian Medical Association continues to advocate shockingly destructive policies, particularly lockdowns. Leading epidemiologists from many of the world’s most elite tertiary institutions, including Harvard, Stanford, Oxford and the Australian National University have come out condemning lockdowns as counterproductive. Yet the AMA has continued to perpetrate these discredited policies.

Even in the past week, more than 500 doctors and medical experts have petitioned the Premier of Victoria Daniel Andrews to immediately cease that state’s lockdowns, raising concerns over the alarming and growing human toll caused by Victoria’s COVID-19 response.

The Covid Medical Network says that the current restrictions are unnecessary, disproportionate and must be lifted, in a statement posted to their website today.

The response to the virus will cause more deaths and result in far more negative health effects than the virus itself, it says.

A Sense of Place Magazine asked for a response from the Australian Medical Association to this call. Although clearly a subject of interest and concern to the nation’s doctors, we were advised that this was a matter for the Victorian government. We therefore put the following two questions to the Victorian Premier via his press secretary.

1. Has Daniel Andrews seen and read the statements from the Australian Covid Medical Network calling for an end to lockdowns?

2. Does Daniel Andrews intend to alter his approach as a result of the concerns being expressed by hundreds of Australian medical professionals?

All we got back were a few weasel words “Attributable to a Victorian Government Spokesperson”.

“Every decision we’ve made since the beginning of this pandemic is based on advice from the health experts and we’ll continue to work with them to keep Victorians safe and slow the spread of this deadly virus.”

But that experience with the drolleries of government spin merchants hammers home the point: the medical profession is being used to perpetrate political and social policies inimical to the best interests of the public.

Just as mobs are notoriously fickle, so are journalists. They hunt in packs. They can turn on a dime.

And Australia’s journalists have turned, exposing the flagrant exploitation of the Covid panic by the nation’s politicians and the absurdity of the government’s policies.

Before Covid came along to rescue him, he was dragging himself and his party into an electoral savaging.

But why should his battered reputation be rescued by the AMA and its members?

Around the world the debate on lockdowns has already done a 180.

Professor Thakur suggests that the recently released Great Barrington Declaration, a call for an end to lockdowns from some of the world’s most distinguished epidemiologists and health professionals, should act as a clarion warning to the AMA.

“The GBD, now signed by over 200,000 people including 20,000 public health scientists and medical practitioners, shows that there is a strong strand of dissent around the world from the dominant narrative, including some extremely eminent and experienced professionals from various walks of life.”

The Declaration opens with the words: “As infectious disease epidemiologists and public health scientists we have grave concerns about the damaging physical and mental health impacts of the prevailing COVID-19 policies, and recommend an approach we call Focused Protection.

“Coming from both the left and right, and around the world, we have devoted our careers to protecting people.”

Professor Angus Dalgliesh is a London-based oncologist with more than 30 years’ experience in cancer practice. Recently he wrote of his anguish on learning of the suicide of two colleagues resulting from the mental stress of the lockdown restrictions-induced loneliness and isolation.

“My concern about present policy led me to become one of the founding signatories on the Great Barrington Declaration,” he explains.

It is long past time when the AMA should have stopped propping up government actions which are clearly having a devastating impact on the health of millions of Australians and which are now being widely condemned by members of their own profession.

This piece was written and compiled by veteran Australian journalist John Stapleton. A collection of his work is being constructed here.