Tear gas and pepper spray are chemical weapons. So, why can police use them? 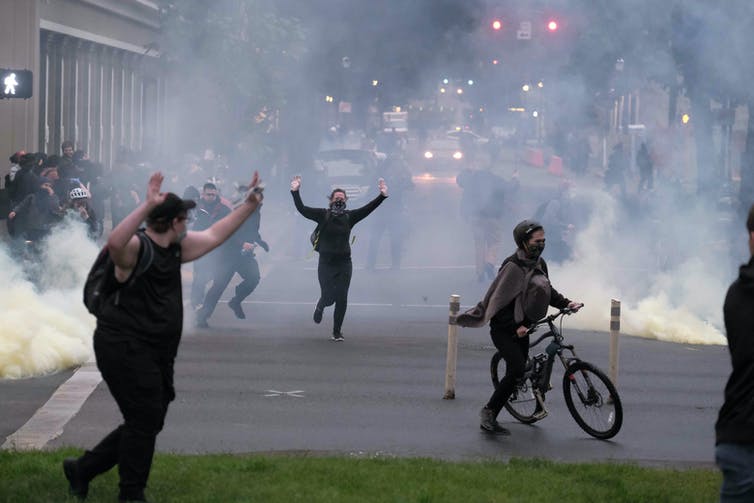 In the ongoing protests over the killing of George Floyd and the broader issue of racial injustice, we have been bombarded with images of demonstrators being hit with tear gas and pepper spray.

In the US state of Ohio, a 22-year-old protester died two days after being exposed to tear gas and pepper spray. Police also used riot control agents to break up a demonstration near the White House to clear the way for President Donald Trump’s photo op outside a church – a move that prompted a federal lawsuit to be filed by the DC chapter of Black Lives Matter.

Read more: Trump’s photo op with church and Bible was offensive, but not new

But now the debate over their use in law enforcement has been reignited. And the fact that toxic chemicals are banned in warfare, but permitted for use against protesters, is at the centre of that debate.

A group of Democratic lawmakers in the US is now trying to prohibit police from using tear gas in such situations, introducing a bill to Congress this week.

What are riot control agents?

Tear gas and pepper spray both fall under the wider banner of “riot control agents”. Tear gas usually refers to the chemical compounds known as chloroacetophenone (CN) and chlorobenzylidenemalononitrile (CS). Pepper spray (or oleoresin capsicum) is a weaponised form of the chemical that adds heat to chilli peppers.

Both are toxic chemicals intended to produce a rapid sensory irritation or disabling physical effect, which disappears within a short time.

Read more: What is tear gas?

It is telling the US Centers for Disease Control and Prevention has described these agents as “poison”. Medical experts have also raised concerns they may increase the spread of COVID-19.

So are they chemical weapons?

The Chemical Weapons Convention, which came into force in 1997 and currently has 193 state parties, places a comprehensive ban of the use of toxic chemicals as a weapon, “for the sake of humankind”.

It explicitly prohibits the use of riot control agents as a method of warfare.

One significant concern with the use of chemical weapons is they cause unnecessary suffering.

Indeed, in a profile of the head of the US Chemical Warfare Service in the 1920s, writer Theo Knappen described the suffering caused by tear gas as a selling point for the weapon:

The tear gases appear to be admirably suited to the purpose of isolating the individual from the mob spirit … he is thrown into a condition in which he can think of nothing but relieving his own distress. Under such conditions an army disintegrates and a mob ceases to be; it becomes a blind stampede to get away from the source of torture.

Another major concern with chemical weapons dispersed as gases and sprays is they are indiscriminate. The nature of the weapon means it is difficult to target and the effects can be widespread and uncontrolled.

In wartime, tear gas and other agents can result in an escalation in the use of chemical weapons. In the fog of war, a military might believe they are under attack from lethal chemical weapons, and retaliate in kind. It can also be very difficult in wartime to collect evidence of what chemicals were used.

If they are banned in war, how can they be used by police?

The Chemical Weapons Convention only restricts the use of riot control agents as a method of warfare. The convention includes an express exception for law enforcement, including domestic riot control purposes.

This exception reflects the history and development of the convention.

However, the US was loud in its opposition to this interpretation, stating the law did not apply to chemical weapons with a temporary effect – in other words, riot control agents.

Read more: Why do protests turn violent? It’s not just because people are desperate

By this time, riot control agents had become a standard part of the law enforcement arsenal across the globe.

As a result, when the Chemical Weapons Convention was being negotiated, a compromise was made: riot control agents would be banned during warfare, but exceptions would be carved out for law enforcement use.

Riot control agents have been promoted as a less-lethal alternative to firearms when police are responding to riots and violent protests.

However, opponents argue they are instead being used as a substitute for non-violent crowd-control methods.

Are there any restrictions on the use by police?

This is not to say there are no restrictions on the use of riot control agents in law enforcement under international law.

The International Criminal Tribunal for Former Yugoslavia famously asserted in the 1990s that it is contrary to the basic principles of humanity and commonsense to prohibit weapons in international conflict but not in civil wars. What is inhumane in one, the tribunal said, must be inhumane in the other.

The question, then, is how we can continue to draw a distinction for the use of riot control agents by police, especially when these weapons are being used not to stop violent criminals, but against people exercising their fundamental human right to protest.