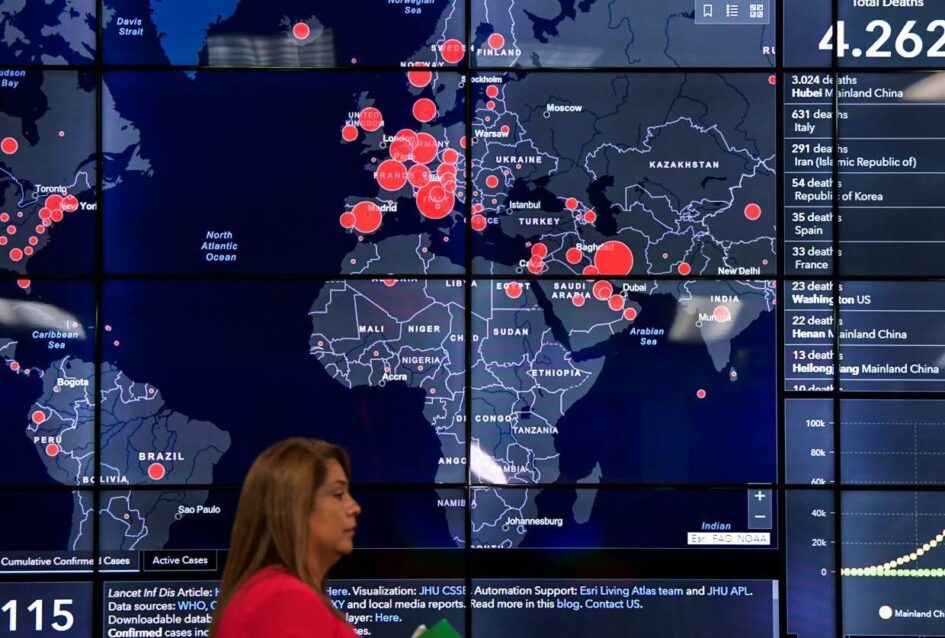 A woman passes by a world map showing countries infected with the new Coronavirus, COVID-19, during a press conference at the National Police headquerters, in Panama City, on March 10, 2020. - The Panamanian Government announced the first death by COVID-19 in the country. (Photo by Luis ACOSTA / AFP)

With Ethan Nash of TOTT News

Two months ago questioning the wisdom of government lockdowns in response to Covid-19 could easily get you banned from Facebook or Twitter. Google executives clearly stated they would be removing what they regarded as fake news. Fast forward to the present and the internet abounds with experts, pundits and ordinary people questioning the multiple insanities of government, the reshaping of work spaces, the brutal increases in surveillance, the new authoritarianism, all being done under the cover of Covid-19.

Not very long ago YouTube was roundly condemned when they removed articulate and well qualified doctors for claiming that Covid-19 was no more deadly than the normal flu and that governments had been panicked into inappropriate shutdowns which were doing more harm than good.

Now Unherd has its own channel Lockdown TV which interviews leading epidemiologists saying exactly the same thing. All on YouTube, while Fox News of all people have taken up the cudgels against big tech censorship. Academics are questioning the ability of Silicon Valley not just to mine data but to induce panic, moral contagion and ultimately conformity in large populations, essentially herding humans at the request of governments and the military, both major clients.

From the big to the small. In Australia tradies, builders, plumbers, brick layers having a traditional beer after work are now required to sit at a table, and can be fined or barred if they stand up or move around the pub. The public are fed up. The politicians can’t let go of power.

Here Ethan Nash of TOTT News gives his take on what is going on.

Australia’s national death rate is in line with averages recorded over the last five years, despite the government initially projecting between 50,000 and 150,000 victims from COVID-19.

Did lockdowns ‘prevent’ this number? Or does the new discovery add further weight to inconsistencies raised during the coronavirus ‘pandemic’?

Data obtained from birth, death and marriage registries for Australian states and territories have blown the lid wide open on the ‘coronavirus pandemic’.

Researchers have recently analysed the data and have found that, in comparison to previous year-to-year averages, Australia has not see any obvious extra deaths in 2020.

Excluding the Northern Territory — which did not supply data before deadline — 38,810 deaths have been recorded this year across Australia.

Two things can be discovered from these findings:

Professor Bennett, who is part of an academic team reviewing COVID-19 mortality data in Australia and internationally, also adjusted these numbers for population growth.

In 2019, it was 5.0. Professor Bennett said the preliminary data shows no dramatic change.

Considering initial fears across the world, including Australia, that overwhelmed healthcare systems will ruin the country, the new reports are a bombshell in hindsight.

Remember: The Australian government initially projected between 50,000 and 150,000 deaths from COVID-19. This was the justification for the lockdowns. Now we know that COVID-19 has not significantly increased the nation’s overall death rate.

Do you really believe the lockdowns ‘prevented’ this? Or was the threat all an imagination from the beginning? To expand, let’s take a look at the cases that were affected during this period.

Debate has surged across the world in recent months as to what degree coronavirus has been labelled in place of existing conditions that would normally be recorded as the cause of death.

Death certificates can be signed by a physician who was responsible for a patient who died in a hospital, which accounts for many COVID-19 deaths. They can also be signed by medical examiners or coroners, who are independent officials who work for individual counties or cities.

The key point here: The statistics have been centralised and thus are subject to being distorted, inflated or forged completely. This is almost always the case when dealing with statistics.

To this end, the Australian Bureau of Statistics have admitted to inflating COVID-19 deaths by labelling patients with pre-existing conditions, which has also been seen occur in America.

For example, the CDC stated that COVID can be a valid diagnosis of the death of someone if the doctor suspects COVID is part of the reason why the patient died. If this is the case, COVID should be listed as the cause of death.

NVSS guidelines also state, “If COVID-19 played a role in the death, this condition should be specified on the death certificate”. Note key that it is not the primary cause.

That only serves to inflate the death numbers of COVID.

Furthermore, hospitals with Medicare patients listed as having COVID-19 are eligible to receive three times as much money if they need a ventilator. With hospital numbers declining, most took the offer.

Many stories have emerged to confirm this, including one of a 95-year-old mother was hospitalized for COVID. On day two of the hospitalization, she died of a heart attack. Guess what the primary cause of death was listed on the death certificate? If you guessed COVID-19, you win the prize.

The New York Times reported in their April piece, Where Have All the Heart Attacks Gone?, that hospitals have seen a 40 to 60 percent reduction in admissions for heart attacks. This is because COVID-19 is being listed as the cause of death for those who would normally fit this category.

To combat the growing skepticism of the story, including the lack of sick people, authorities began floating the ‘asymptomatic’ meme, with researchers now suggesting anywhere from 25 percent to 80 percent of people with COVID-19 are unaware they have the virus.

However, news of no increases to averages of Australian death rates has once again exposed the authorities. The evidence clearly shows that the continued grand narrative of the coronavirus is on its last legs.

Close your eyes. Imagine a world where disease-carrying pathogens are considered “inventions.”  Now open your eyes. You live in that world!

Governments love crises because when the people are fearful they are more willing to give up freedoms for promises that the government will take care of them.

We have seen this movie before. Authorities over-hype a threat as an excuse to grab more of our freedoms. When the ‘threat’ is over, however, they never give us our freedoms back.

It seems like not a day passes by now without some new development in this over-sensationalized corona-world. The last few months have been a whirlwind.

We have seen the real casualty list grow to include logic, reason and truth, and the narrative continues to shift. Is COVID-19 now taking a break while America experiences ‘civil unrest’?

In Australia, despite mass protests over the weekend and extended coverage of the CoronaHoax saga, there is still no sign of anything changing — with Australia set to continue ‘social distancing’ restrictions as part of the ‘new normal’.

How can the Polyergus justify lockdowns in wake of recent changes? How can 30,000 people gather in Brisbane, yet shop owners are still restricted to no more than 20 people in their stores?

Will COVID restrictions be used to further enhance Australia’s ‘anti-protest’ laws? Could this have all been part of the plan?