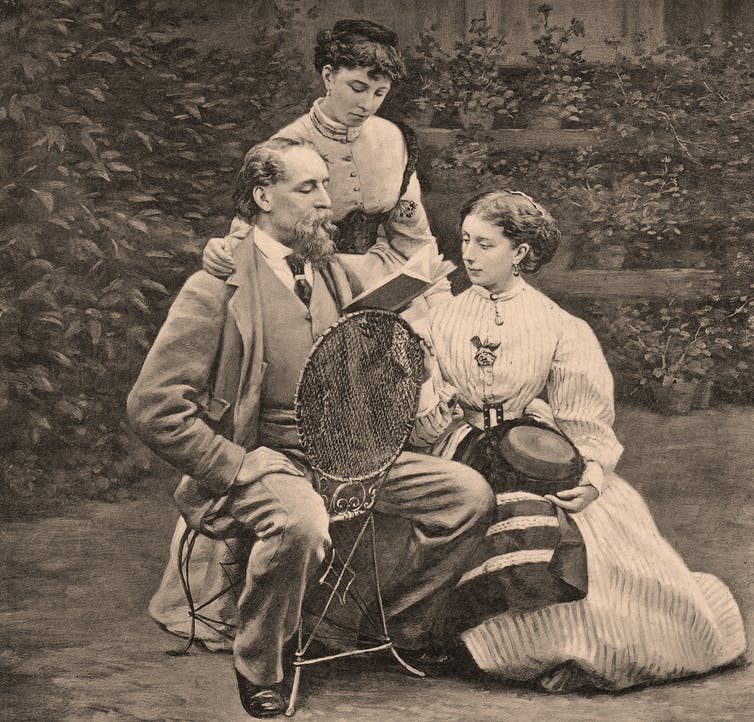 By Catherine Waters, University of Kent

“Charles Dickens the misogynist”, ran a headline in the Mail on Sunday on May 23 2020, publicising a new book marking the 150th anniversary of his death on June 9 1870. “The novelist was cruel to his wife, hated his mother [and] had an affair”, it reported.

But this is an old story. When news broke last year that a cache of letters at Harvard University had disclosed Dickens’s attempt to place his wife, Catherine, in an asylum, it only confirmed for many that he was a stereotypically “ruthless Victorian husband”. Dickens’s affair with Ellen Ternan and cruel treatment of his wife are well known and he has long been criticised for depicting weak females in his fiction. But was what the Mail called “his need to control and manipulate members of the opposite sex” really “a defining feature of his life”?

To a large extent, Dickens’s beliefs about women were typical of the age. “God created men and women different – then let them remain each in their own position”, declared Queen Victoria in the year of Dickens’s death – and in many respects, Dickens shared this view. Women’s supposed innate purity and selflessness were held to fit her for the making of a home that would serve as a refuge for the man who must endure the rigours of public life.

Mrs Jellyby in Bleak House is probably Dickens’s best-known example of a woman betraying the home in this way, neglecting her own children in favour of raising funds for the distant natives of Borrioboola-Gha. She devotes herself to this cause and, as a result, her house is dirty, the servants unruly, and her unfortunate husband neglected. Notably, Mrs Jellyby is last heard of in the novel perversely continuing to neglect her home duties by campaigning for “the rights of women to sit in parliament”.

Dickens also set out to satirise such agitating women in Household Words, the journal he published throughout the 1850s. A polemical piece he published on Rights and Wrongs of Women lampooned those women who aspired to become an “inferior man”, and extolled instead the path of “a noble, unpretending, redeeming, domestic, usefulness” to be taken by “the loving, quiet wife, the good mother, the sweet unselfish sister”. “Give woman public functions”, the anonymous contributor wrote, “and you destroy the very springs of her influence”.

But Dickens also explored the constrictions of women’s roles in his fiction through disruptive female figures who help to expose the limitations of the Victorian feminine domestic ideal: like Rosa Dartle, Bella Wilfer or Edith Dombey, whose rage at her powerlessness, “There is no slave in a market, there is no horse in a fair, so shown and offered and paraded … as I have been”, continues to resonate.

As in his fiction, so in his journalism, Dickens’s response to demands for reform of the position of women was more complex than is often appreciated. He was prepared to support campaigns against particular legal and social injustices suffered by women and he was not unsympathetic towards the demand for extending employment opportunities for them.

Indeed, he was especially supportive of women’s efforts to reach out to a wider public sphere within his own field of expertise – literature and journalism. For the author of the Household Words essay, the Rights and Wrongs of Women, was a woman – and the first English female newspaper correspondent to draw a fixed salary: Eliza Lynn (Linton).

Dickens encouraged women writers to contribute to his journals, recruiting prominent authors such as Harriet Martineau, Elizabeth Gaskell and Eliza Lynn when he founded Household Words in 1850. Lynn had worked for two years on the staff of the Morning Chronicle and published three novels before she became a Household Words contributor in 1853. She wrote for the journal up until the last year of its publication, contributing more than 60 items. Dickens came to value her work highly: “Good for anything and thoroughly reliable”, he wrote against her name when making out a list of contributors at one time.

Ironically, while Lynn shared Dickens’s conviction that women’s aspirations to participate in public life undermined their proper, natural duties within the home, she defied the stereotype herself. As a hard-working journalist within the male domain of the Victorian newspaper and periodical press, her career challenged the accepted idea of womanhood and questioned the limits placed upon the female role.

Lynn first met Dickens at a dinner party and later recalled his kindness to her: “He included me, then quite a beginner in literature, young in years and shy by temperament, and made me feel at home with him”, she writes. When her father died in 1855, she sold Gad’s Hill Place, where part of her early youth had been spent, to Dickens, and visiting some years after his death, remembered:

How bright he was! How keen and observant! His eyes seemed to penetrate through yours into your very brain, and he was one of the men to whom, had I been given that way, I could not have dared to tell a lie. He would have seen the truth written in plain characters behind the eyes, and traced in the lines about the mouth.

Such a profound capacity for truth-seeing and telling is of course just one of the qualities for which we remember Dickens on the anniversary of his death. While his reputation as an exponent of the “home goddess” stereotype is undeniable, he also imagined strong women, rebellious women, and women inwardly divided, who provide a more complex picture of his fictional treatment of the opposite sex than this reputation suggests.

And in the practical support he gave to women like Eliza Lynn, we remember above all his deep commitment to writing, to the professions of literature and journalism, and his unshakeable belief in their ability to move us so as to remedy social injustice and inequality for women and men.