Submit or be Screened Out: Australian Broadcasting Corporation makes us Sign Away Our Souls 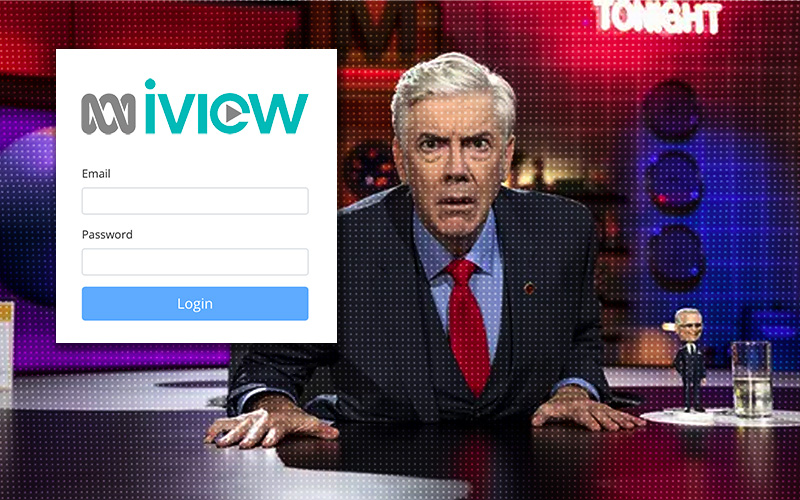 Why would the ABC put barriers in the way of Australians’ enjoyment of its cultural treasure house? Mark Sawyer wonders whether management understood the implications, or simply fell under the spell of its seemingly unlimited army of tinkerers and spruikers.

Every time I log in to the ABC’s iview streaming service, I expect the axe to come down. The moment I am told I cannot watch a program until I have logged in to the service. I have been dreading this moment for a while. I’ve had plenty of warnings.

As of this month, the ABC will require users of the platform to set up an account and log in every time they want to use the service. Otherwise, no Micallef‘s Mad as Hell for me! No Newsreader, no Troppo, no Fisk, no Frayed, no Vera. The live service is not affected.

Some perspective. It’s not war in Ukraine or fire and floods, or the climate apocalypse. I get it.

But something I could do before without harming a soul is something I can’t do now. Surely that is one definition of a bad idea. It’s not cataclysmic, but I feel a little pang as I look at this national treasure in a different way.

Give the people what they want

So why would the ABC put barriers in the way of its programming? Radio National presenter Patricia Karvelas is one who tried to find out. She interviewed ABC managing director David Anderson on February 17, the day the change was confirmed, having been delayed amid howls of outrage last year.

Karvelas: Aren’t people entitled to use the ABC without having to sign up and share their personal information?

Anderson [edited response]: For ABC iview now we have four and half thousand hours. People expect personalised features to come with that, be able to navigate your way through and find content that’s relevant to you. So this login allows you to set profiles, allows you to have watchlists, you get recommendations, you can see your viewing history, so there’s a lot of features that people get through other services, and we know that through our surveys that 96% of people that come to ABC iview actually have another account with another vod service which does provide those features.

PK: Why not give people the choice?

DA: People can – people will need an account to log in. There are 6 million ABC accounts already throughout the country, and people have a choice to opt out of receiving personalised information about what is sitting in iview. … You can go into your setting preferences, and you can say ‘I don’t want this personalisation’, but you will need an account to log in to ABC iview.

It’s in the way you spin it

What? People expect, people want? How did I miss this clamour? People want a federal ICAC and shirts that don’t wrinkle and umbrellas that don’t splay. Is this word-salad merchant the best the ABC can offer? What was especially galling is the conceit that because Australians have embraced commercial streaming services, the ABC can do the same. Do I need to shout it: the ABC is not a commercial broadcaster!

But fair’s fair, let’s give the ABC home page a chance to explain. Here goes:

Why should I log in when using ABC iview?

(My first question: ”Should”? So there’s a choice? Actually, there isn’t a choice.)

Being logged in when using ABC iview unlocks great features that will improve your ABC iview experience. From March, you’ll need to be logged in to an ABC Account to watch programs on ABC iview.’’

Question 2: What are these features and why are they ”locked”? (Is that another word for ”withheld”?). When corporate spinners use terms such as ‘’improve’’ and describe watching the tellie as an ‘’experience’’ you might spell a rat.

It goes on and on. My favourite:

‘‘We know from extensive listening across broad ABC audiences that ABC viewers overwhelmingly support this shift. However, we also understand that some of our audiences are happy using ABC iview without needing to login.’’

What? Can we have some details? And if there wasn’t any pushback, why was this proposal shelved amid protests in 2021?

It’s progress, but how?

Writing an article like this invites allegations of fogeyism. No, I haven’t accepted self-service checkouts at supermarkets. Good jobs have been lost so we can get a cheaper bag of Doritos? OK, too glib. It’s my fellow shoppers I don’t understand: how quickly they accepted the tasks of scanning the groceries, packing, and paying, while watching the stroller and making sure the significant other hasn’t sent a text asking for a bag of Doritos.

Where priorities are concerned, I do wish the national broadcaster would focus on some clear problems. Radio news would be a start. More than one newsreader can’t pronounce some proper or place names.

Interview phone lines are scratchy or drop out. Technical faults (I won’t use the cutesy word glitches) in many radio interviews; radio news where the wrong grab is presented with alarming frequency.

The questions, however, won’t go away.

Exactly why does anyone watching iview need an account? How does this tally with universal service obligations? The disabled? Blind people? What data mining is being considered? How EXACTLY does having an account help somebody who does not want their choices dictated by an algorithm?

Can somebody give the exact reasons without corporate spin?

Ultimately, I can find no satisfactory explanation as to how exactly this is a better system.

Doing the unthinkable: an ABC detox

I feel a little like the fox in the Aesop fable about the grapes. Do I really want this? What will I miss? Scanning the offerings, I detect a fair bit of flimflam among those 4500 hours. A fair bit of this-is how-you-must think stuff. Wacky ‘’comedians’’ with hipster beards and haircuts. Shows that mix mawkish gloop with the presumption that everyone can be pigeonholed by gender or ethnic profile or any other attribute. Pointless what-if scenarios spread over six episodes.

But hey, this is the ABC! My ABC! Australians have been paying for it for 90 years. We own a stake. We get to laugh along, or cry along, marvel at some exquisite drama and comedy, stand in awe at some brilliant journalism, or howl at some pompous pontificators. This Aunty is part of the family!

I can probably adapt myself to catching Insiders, Four Corners, QandA and Media Watch in real time, which is how I grew up with the tellie. And hey presto, Insiders and QandA are also on the radio (ABC News Radio) so all I really miss visually is the Insiders cartoon segment and QandA’s repeat tweeters. I’ve been meaning to look up some old Australian Story episodes, so that’s a loss. There is a light – Rosehaven has moved to Prime Video.

If the ABC is going to act like just another streaming service, then it becomes just another player in the media marketplace, not our cherished voice, the broadcaster who inspires and infuriates like no other. By no account will I submit!

Of course at some point I’ll just bloody give in, and start scanning those groceries.