Melbourne’s Siege at the Shrine of Remembrance: A Symbolic Day in Australian History. The Best of 2021. 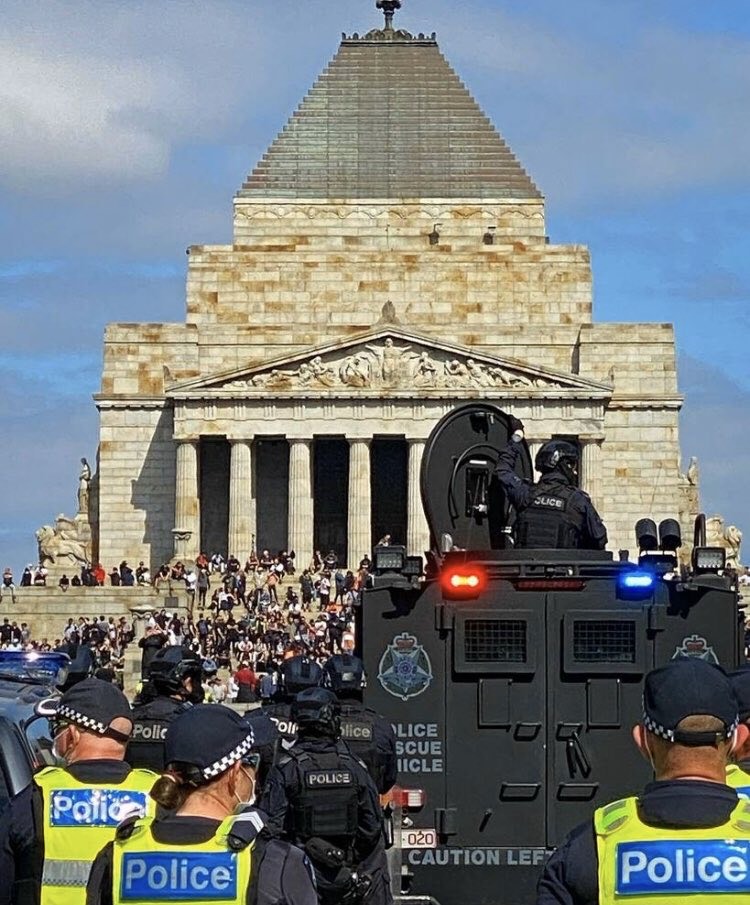 For the third straight day, protesters had descended upon Melbourne to exercise their fundamental right to have their voices heard, in a day that will go down in Australian history.

The police rolled out the counter-terrorism unit early in the morning, chasing the group through the Melbourne CBD, before a standoff occurred at The Shrine of Remembrance.

Both the beginning and the end of the day witnessed scenes of heavily militarised police firing non-lethal projectiles on unarmed Australian citizens.

TOTT News takes you through the chain of events in Melbourne.

EARLY: NO MESSING AROUND

Freedom demonstrators, many of whom were tradies, once again headed to the city at around 10am to fight for the longstanding values of freedom of choice and speech.

Unlike the previous day, police were not prepared to simply let peaceful individuals march through the city.

As quickly as protesters arrive\d, riot police descended upon the Melbourne CBD to confront them:

Police immediately began firing upon the group, who began running through the city streets:

To be clear, once again, the protest is about choosing what to inject into your body.

This is the reaction of the state.

The squad began picking off those they could catch, unleashing spray and heavy-handed tactics:

Once more from the riot squad for good measure, while we’re at it:

One video shows distressing scenes of riot police jumping off the bearcat, before chasing individuals to the footpath before arresting them violently.

Remember, this is all about your health folks.

One protester ran past the mainstream media, claiming ‘we can’t feed our families’ while holding a sign for medical freedom. He was soon chased by police, before narrowly escaping.

Other campaigners noticed the media was on-the-ground and decided to confront them with questions while the live broadcast was occurring:

After a cat and mouse game through the city, the group were funnelled to the outskirts, and called for everyone to head to the Shrine of Remembrance as a last resort option.

Forced to the shrine

After police attempted to stop protests in the CBD earlier, a sizeable group marched to the Shrine of Remembrance to get their messages across. A symbolic scene to see:

The group continue to chant “every day”, a main slogan of the campaign.

Police slowly begin to move up the park, while arresting those who are trying to enter behind them.

Police begin to move in, as the group chant “we are peaceful” and sing the national anthem.

At this time, the mainstream media are describing the current standoff at the Shrine of Remembrance as ‘targeted’, ‘disgusting’ and ‘disrespectful’.

However, words from protesters on the ground tell a different story as to why they are there.

Some time elapses, before riot police begin slowly moving to the front line.

Protesters stand defiant and call for police to “take a knee”. The standoff continues.

The whole eyes of Australia are watching these scenes unfold, mostly from a mainstream media outraged perspective, as the groups eye each other off.

Police begin picking off some individuals from the outskirts of the group for arrest:

However, despite the intense scenes witnessed earlier, it seems there might be a positive outcome.

As the groups remain put, negotiations begin between the crowd and police.

Lots of respect was being shown, with protesters offering water and engaging peacefully.

The police have said to protesters that they can leave peacefully if they wish, however, the group is split on what to do, with some wanting more information on how this could occur.

Tensions soon begin to rise as police move closer. Just then, as things seemed to be going well, they take a turn for the worst around 5:00pm.

The riot squad keep moving closer and closer, as it seems the time to make a decision is up.

Police said protesters could leave through St. Kilda Rd, to which protesters responded they wanted to leave the way they came. They suspected the suggested way was a trap.

However, the negotiations soon stop, as police move in, firing on people and arresting who they can:

From this point, police begin have chasing protesters out of the park, continuing to stalk and fire.

One distressing video shows the force chasing the unarmed group and firing from behind:

One man can be seen in the middle of the screen in a yellow shirt putting his hands up and surrendering, before police shoot him down with rubber bullets anyway and pounce on him.

One user commented on the TOTT News Facebook page:

“It’s like something out of a horror movie. Firing at a peaceful protest.. the one good thing I saw was the person (supposedly a police man) with the round shield, pulled another ‘officer’ back when he went forward aggressively yelling at the crowd. The protesters didn’t do anything to warrant the way these terrorists/mercenaries/hired thugs, dressed in riot gear pretending to be police doing what they did, who are in service to the public… who are these people??“

Many other online personalities shared similar concerns with the unfolding scenes:

The police continued to chase the crowd through the CBD before they all dispersed.

The scenes saw protesters pelted with non-lethal modes of engagement. One man, after being shot, gave his thoughts on what had just occurred. He says it is ‘unbelievable’.

Even more unbelievable than that was the media and public reaction to these events.

It was not long before a range of personalities emerged to denounce ‘anti-vaxxers’ and ‘far-right extremists’ who took part in the protest at the Shrine of Remembrance.

It should come as no surprise that given the symbolic nature of the Shrine, the media had a field day.

Let’s not forget, however, that the crowd was forced to go there after being denied their fundamental right to protest through the Melbourne CBD streets.

But the establishment didn’t stop there.

Not only did they condemn the protests, they begin fabricating stories to make it worse.

The mainstream media began running stories claiming that the group was a highly disrespectful mob that desecrated the Shrine by leaving rubbish everywhere and even urinating on the monument.

However, a quick look at the video and photo evidence from that day tells a different story:

The only rubbish that was left behind was done so because protesters didn’t have enough time to pick it up after being fired upon by a militarised police force.

The fact that the media are more concerned about rubbish, than they are of unjust actions like this, tells you everything you need to know about the propaganda machine.

In the afternoon, after the storm had settled, the CEO (yes you read that correctly) of the Shrine of Remembrance took to social media to join in the condemnation circus:

This is the same RSL that erected fences and blocked the Shrine area off to veterans and supporters on ANZAC Day – to ‘protect the community from a virus’.

Again, for any rationally thinking personal to be more ‘speechless’ at protesters exercising their right, as opposed to blocking ANZACs out of the park, one may need to re-consider their position.

Thankfully, there was one sane voice in the public spotlight that addressed this important day.

A voice of reason..

The much vilified Craig Kelly MP was one of the only figures to denounce these acts by police. He wrote in a post: “After days of repeated Vic Police attacks on unarmed citizens, I am calling for an urgent Judicial Inquiry into Police Brutality I condemn any Police brutality in the strongest possible terms It’s unacceptable, unAustralian & illegal.”

A sad state this country has become when this viewpoint is the minority.

As the day wrapped up, a few more scenes gave us an insight to what is to come tomorrow.

As the day came to end, two more videos emerged that added to an already stunning day.

One tradie, after already being stopped by police, is asked where he is going by members of an unmarked car. Next thing, Specialist Operations Group (SOG) members pounce on the man:

This is the para-military wing of the Victorian Police force, and they are now on site.

At Flinders St. Station, police were watching for any suspects trying to escape the CBD via public transport, with one video showing an officer slamming someone to the ground from behind.

If these two videos are anything to go by, as with the incredible body of evidence of pictures and videos produced by witnesses and protestors, things have radically shifted from a protest that blocks traffic for a few hours, to a warzone.

This day confirms what we have been saying for many years: Anti-dissent, and anybody who questions the system, will be labelled as the new domestic terror threat one day.

That day has arrived, ladies and gentlemen.

Targeting those who defy government instructions like an enemy of the state.

The new world order has risen its ugly head on the streets of Melbourne, just like Sydney.

The world is watching Australia, the test-ground for techno-fascism.