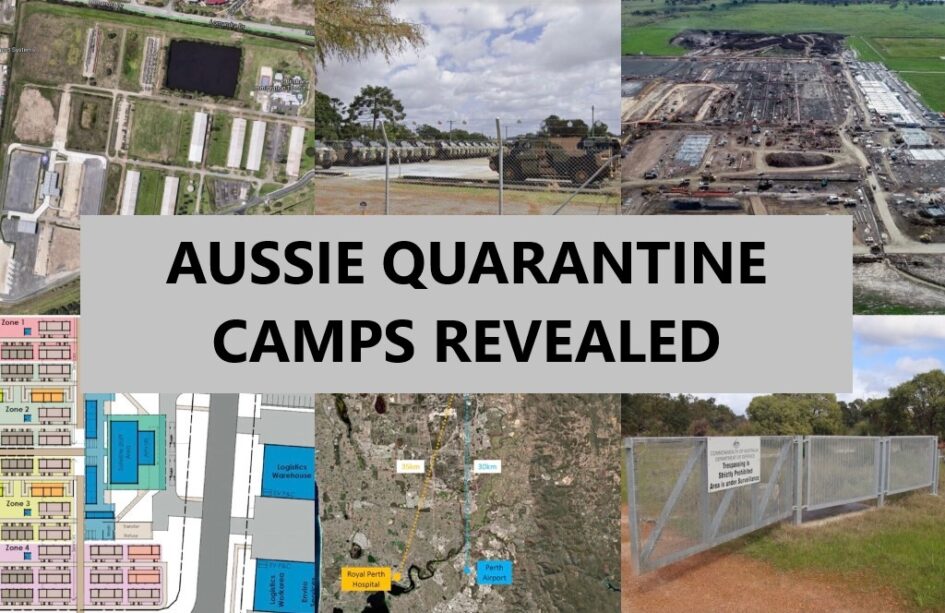 TOTT News takes an exclusive look at the names and locations of COVID quarantine camps across Australia.

When the unique media outlet TOTT News first began covering the Covid era much of what they published, such as predictions of vaccine passports, uber surveillance and population wide Psychological Operations seemed like science fiction.

A Sense of Place Magazine have always been lovers of science fiction, so we published them from the beginning, but with no real belief their seemingly fantastical predictions would come true.

Since then, everything has changed. Australia’s mainstream media have utterly discredited themselves, while independent media including TOTT have forged to the front. As the Australian government has lost control of the Covid narrative, independent outlets are now attracting tens and often enough hundreds of thousands of followers.

In this pivotal period of history Australia is now unrecognisable from the easy going and optimistic nation it was less than two short years ago.

In this article, TOTT News documents the names and locations of publicly-acknowledged COVID quarantine camps across Australia.

With Australia’s headlong plunge into totalitarianism, rightly or wrongly some are already now beginning to equate quarantine camps with concentration camps.

For many, life in Australia has already become a daily horror show.

The traditional, government pushed convention for the media not to cover suicides, allegedly over concerns provoking copycat incidents, has long had the impact of concealing the many injustices in Australian society and is now being pushed to the limit.

Many suicides are being publicly and privately linked to the prolonged mistreatment of the citizenry during the Covid era.

Equally, much of what happens inside these camps remains concealed from public view. This article does not include the names and addresses of hotels, motels, and animal centres currently being used/planned for use because most are temporary camps.

South Australia, for example, does not appear to have built any camps. Instead, it is temporarily using hotels and resorts.

Rather, this piece will cover permanent and semi-permanent nationwide compounds under construction or refurbishment of primary concern, and include army barracks and refugee/immigrant holding facilities.

At the time of writing, Tasmania uses only hotels for quarantining humans. Several Australian quarantine stations, like Cape Pallarenda and Lytton, are heritage sites unsuitable for modern containment.

In states with dedicated centres, once the new buildings are constructed and the old ones repurposed, the hospitality sector and animal quarantine facilities will resume their pre-COVID activities, leaving new arrivals, positively-tested, and unvaccinated people to face quarantine in the new/repurposed centres.

To make things complicated, in addition to prison islands (like the facilities on Christmas Island) and apparently separate camps (like the Queensland Regional Accommodation Centre), several states have signed up to the Centres for National Resilience (CNR) — supposedly three quarantine camps in three separate states (Queensland, Victoria, and Western Australia).

However, as we shall see state authorities confirm the existence of a fourth, existing CNR camp in the Northern Territory serving as the model for others. In addition, another non-CNR quarantine facility has been announced for the NT.

At the time of writing, no official details have come to light as to NSW’s prospective quarantine centre(s). The only major media report appears to have been in June, when NSW’s Premier, Dominic Perrottet, credited the hotel quarantine scheme and expressed an “interest” in the possible construction of dedicated facilities.

Given all of this mess and confusion, it is perhaps important to make a comprehensive list and analysis.

There are at least three compounds on Christmas Island, the tropical territory 1,900km northwest of Australia, primed for quarantining humans. They are the North West Point Immigration Detention Centre (NWPIDC), Phosphate Hill, and the so-called Construction Camp Alternative Places of Detention (APOD).

The name of the NWPIDC is deceptive because non-immigrant/refugee prisoners are also held there.

Human rights groups have not only identified the appalling treatment of asylum seekers and immigrants at the facilities but noted that those held indefinitely are “mixed in with about 200 men exiting prisons from across Australia.”

Phosphate Hill and APOD have capacities for over 700 and consist of transportable buildings across three sub-compounds codenamed Alpha, Bravo, and Charlie. They suffer similar environmental degradation.

Freedom of information requests reveal that at the acknowledged start of the pandemic in January 2020, the Department of Home Affairs began the process (“Step-in rights period”) of temporarily handing over the NWPIDC, run by the private firms Serco and International Health and Medical Services, to the Commonwealth to quarantine Australian citizens evacuated from China.

Costing over $20m and indicative of the militarisation of containment management, the Christmas Island Maintenance Services took over operations in collaboration with the Australian Defence Force.

By late-March 2020, the arrangement had changed to so-called “hot contingency,” in which the above agencies could commandeer the facilities again at short notice.

As noted above, there are at least two quarantine camps in NT: the National Resilience Centre (NRC) in Howard Springs, Darwin, and the Alice Springs Quarantine Facility.

Twenty-five kilometres from Darwin, the Manigurr-ma accommodation village at Howard Springs is now part of the NRC.

In 2014, the company INPEX announced that it had completed construction of the village, an ex-mining camp, as a temporary residency for labourers in the Northern Territory.

It did not, at that point, have any function as a quarantine centre. An industry report says that the facility can house up to 3,500.

Early in the pandemic, the NT government announced that Border Force and the Australian Defence Force would take repatriated Australians from China via RAAF planes to Manigurr-ma, “a perfect fit for quarantine purposes … The Manigurr-ma village site is a declared isolation zone under the Notifiable Diseases Act – that means any movement in or out is strictly controlled and enforceable by law.”

The location has become the subject of much controversy in recent weeks, including during the ‘co-ordinated transfer’ of positive cases from remote indigenous communities to the facility.

Escapees have been tracked and apprehended by contact tracers and police forces.https://tottnews.com/2021/12/01/multiple-people-escape-nt-quarantine/embed/#?secret=0wr0WLsSXx

The second is the Quarantine or Todd Facility in Alice Springs. Information on Todd is difficult to come by, but it would appear that the centre is the commandeered Mercure Alice Springs Resort, repurposed for quarantining arrivals until at least January 2022.

Consciously or not, PM Scott Morrison and Queensland Premier Annastacia Palaszczuk played a game of dialectics.

Morrison said that in Queensland, he preferred that the government use an existing military barracks, the Damascus Barracks, in the east, on the Brisbane River.

Palaszczuk said that her preference was the construction of a new facility in the Orwellian location, Wellcamp, 150km away in Toowoomba.

Australians seem to have ended up with both. The Damascus Barracks will reportedly be part of the Centres for National Resilience.

Built in Meeandah, Brisbane, in the 1940s, the Australian Army’s 29.5 hectare Damascus Barracks were developed by the US in the Second World War for military waste disposal; hence their location on the Brisbane River: a handy place to dump toxic waste.

The Barracks were then taken over by the South Queensland Joint Logistics Unit for storage and supply. They contain unexploded ordnance and chemicals from herbicides.

Yet, this is where Morrison wants to quarantine incomers.

On 16th August, the Queensland government signed a Memorandum of Understanding with the Australian Government for Commonwealth “to design and build a quarantine facility at the Damascus Barracks and ensure consistency in the design for the efficient operation of the facility as part of the statewide quarantine network.”

It would appear that additional capacity will be constructed on existing grounds, housing 1,000 people.

Palaszczuk was asked by 7News’ Sunrise if QRAC was still needed. Palaszczuk said that her desired target was allegedly 90 percent of the population double-jabbed and stated that foreign visitors or repatriated Australians could be “charted in” to the camp from potential, future red zone countries.

Chillingly, she added: “We’ll also need it for unvaccinated people.”

Palaszczuk concluded: “We’ll also need it for people who are international students who are looking at doing labour for our farmers. So, I think there’s a whole lot of opportunities as well.” Her remark about the unvaccinated is not taken out of context. For instance, she was not talking about unvaccinated foreign travellers. The presenter replied: “OK. Good to go for Christmas!”

The government of Victoria (GOV) specifically notes that its purpose-built “quarantine hub,” as the GOV calls it, is strategically located outside Melbourne’s central business district.

The preferred site is 40 hectares of unused ground at the existing Donnybrook Road animal quarantine facility in Mickleham, owned by the Department of Agriculture, 29km north of the CBD.

In Huxleyan Brave New World fashion, the AQA is a happy camp in which those held will supposedly have space, pleasant views of greenery, and entertainment, including broadband.

Complicating matters, the AQA appears to be part of the Centres for National Resilience. A $32 million dollar construction contract was awarded to Fleetwood.

AQA is being expanded in stages, with the first set to host 500 people, then 100, with a reported capacity of 3,000 (2,100 a week), “as part of a scalable build if a larger facility is determined to be required at any point.” The design includes “relocatable cabins.”

A design report anticipates that COVID will continue up to three years, taking us to 2024, yet it also notes that the facility will take up to 22 months to construct, by which time the pandemic would be endemic and managable.

This raises questions about how long the federal and state governments really intend to quarantine people.

“[C]ohorts,” or people, “from countries with a slow vaccine roll out could be allocated to the Alternative Quarantine Accommodation to better manage risk while lower risk cohorts could continue to utilise Hotel Quarantine.”

In August, the federal government fast-tracked legislation for the construction of the Queensland camps and at least one compound in WA, 45km from Perth, part of the Centre for National Resilience.

The construction firm Multiplex was awarded the contract to build Western Australia’s quarantine camp on Commonwealth-owned land in the Bullsbrook Training Area: a Royal Australian Air Force base. The compound will reportedly hold at least 1,000 people.

In addition to firefighter training and paper and ink incineration, the Department of Defence says: “There is also a landfill on the property, which was used to dispose of waste from on-site operations.”

Even ABC News acknowledges that “People who live in the area were forced to use bottled water because their bores were contaminated with toxic chemicals contained in firefighting foam.”

In summary and despite mixed messages from media, Australia’s quarantine camps are:

How long will the above camps last and will additional ones be built?