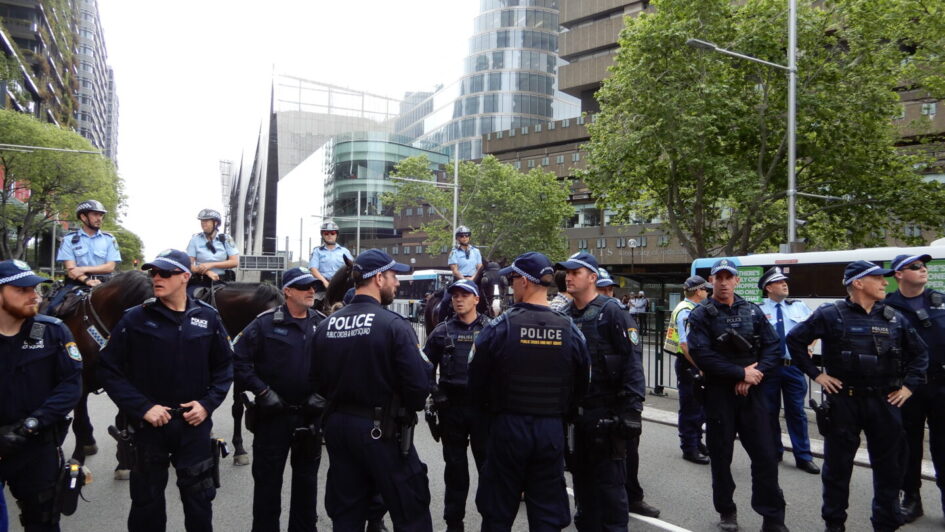 Friday 25 September 2020 saw the Morrison government begin cutting back JobSeeker unemployment benefits. The increased rate provided to the escalating numbers of unemployed during the pandemic period is being reduced, as treasurer Josh Frydenberg attempts to starve people back into employment.

Overlooking the debate around whether employers do hire underfed applicants who can’t afford new clothes, the fact that there’s 12 people for every job vacancy in Sydney and Melbourne doesn’t bode well for those looking for work.

Next Monday, sees JobKeeper – the wage subsidy designed to help employers keep staff on during the COVID-19 downturn – is being cut in terms of employee payments, whilst business eligibility is being tightened. So, this will likely see more job losses and indeed, businesses fail.

The economy is in deep recession, the rescue packages are being withdrawn, and as we plummet towards a time of greater austerity, police forces across the country have been given a shot in the arm, in terms of bolstered powers, and just plain disregard for citizens’ rights.

Whether the authoritarian response was the only way to deal with COVID is a question for another time, as right now, the immediate reality is that the authorities have heightened the position of police, empowering them to stamp out dissent, at a time of growing uncertainty and need.

The normalisation of overpolicing

In NSW, as elsewhere, state police were provided with enhanced powers to ensure that people abided by pandemic lockdown rules. The Berejiklian government went one step further and handed coordination of the entire state COVID-19 response to NSW police commissioner Mick Fuller.

What unfolded were ongoing theatre of the absurd moments, as police started issuing steep fines: a lone kebab-eating man sitting in a park was hit up, teens wanting to hang out with friends were charged $1,000, and a young man was pulled up and penalised after the restrictions had been lifted.

Mirrored nationwide, these episodes got the public used to police out on the streets stepping on our everyday civil liberties in a manner that was unthinkable just days prior.

And since Melbourne has gone into its second lockdown, there’s been a further creep upon what’s considered acceptable policing.

A cluster of COVID-19 infections linked to some public housing towers resulted in 500 police officers being sent in to ensure 3,000 residents went into immediate lockdown: no preparation, no excuses to leave. And while many raised questions about the response, the deployment remained.

There was also the Victoria police officer who put a woman in a chokehold and dragged her by the throat over a facemask incident. She was pushed to the ground, taken to the station and charged with resisting arrest and assaulting police. The male officer was officially cleared of any wrongdoing.

Social justice activists have lately asserted that there’s a lot to protest about now. The systemic racism in policing and corrections has gained a prominent focus, refugees have been detained in COVID hazardous conditions, while Morrison’s trying to dismantle higher education as we know it.

And as the consequences of the economic downturn become more apparent and bailout measures disappear, more issues to mobilise around are likely to emerge.

So, from the perspective of authorities in this state, it’s lucky NSW police has been enforcing an unofficial ban on protests.

Within the bowels of the NSW government’s public health order on gatherings is a conveniently worded prohibition on outdoor meetings or assemblies of more than 20 people “for a common purpose”.

That’s right, while stadiums are filling up post-lockdown and shopping centres never stopped being crowded, the Coalition has quietly cancelled the right for more than 20 civilians to gather in public if they have a shared political interest.

The prohibition on demonstrating is the clearest evidence that the authorities are using the opportunity gifted by the pandemic to roll out measures that on the books are about preventing virus transmission but, on the ground, allow for heightened social control.

South of the border

Melbourne has become ground zero for the pandemic in Australia. And it’s also become the site of drastic, heavy-handed over policing, enhanced monitoring of the population, and suppression of public dissent.

The protesters who’ve been silenced in Victoria are anti-lockdown demonstrators, many of whom believe there’s no sense to pandemic restrictions as the virus isn’t the threat it’s been presented to be, while others assert that isolating from the rest of the community isn’t necessary.

But the crackdown upon these dissenters should be of concern for all civilians as the rights they’re having infringed are the rights shared by all.

Indeed, it was noted that when the suppression of Black Lives Matter rallies began in early June, initial anti-lockdown actions had simply been ignored.

Down south, Victoria police raided a woman’s house for posting on social media about a rally, while the show of force by the state’s riot squad in dealing with 250 protesters at Melbourne’s Queen Victoria Markets on 13 September 2020 was not only excessive, but brutal and authoritarian.

Melbourne Activist Legal Support this week outlined that “during COVID, police throughout Australia have rapidly and aggressively expanded their already-considerable surveillance capabilities”. And in Victoria, this has involved aerial surveillance, mobile CCTV and the monitoring of social media.

A boot stamping on a human face

So, this leaves the population gazing down the barrel of a potentially severe economic period, with a governing body more concerned about the profits of the transnational mining companies it represents, than the welfare of the general populace.

The prohibition against protests is an essential tool in stifling any questioning of how those governing see fit to continue on, and the way it has been coordinated in NSW, is a clear indication of how the overreach during the COVID period is having a hangover effect.

Just as the implications of the carefully crafted wording of the protest prohibition in the NSW public health order weren’t apparent until after it was being enforced, it’s hard to gauge what other rights and liberties that are currently being policed away may continue to be going into the future.