Australian War Memorial: from Keeper of the Flame to Hider of Shame? 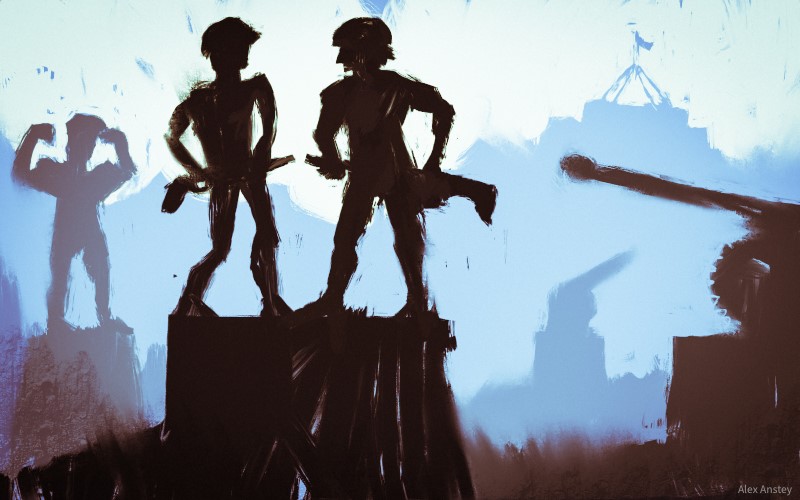 The big brand theme park that is the Australian War Memorial, bankrolled by international arms manufacturers, is an object lesson in dishonesty.

Conceived during World War I amidst the mustard gas, the dead soldiers, and rotting horses on the wet battlefields of Pozières, France, the Australian War Memorial was to be the keeper of the flame, a reverential, reflective space where we could remember and honour fallen Australians.

But it has now morphed into a war advertisement, a loud celebration of successful belligerence.  How did we get to a situation where we cannot let people make up their own mind about the concept of war but have decided they need help via the big dollar donations from the manufacturers of war machines?

Next time you are at the Australian War Memorial check out BAE Systems Theatre, a swank conferencing facility. Getting a corporate name plate inside the Memorial is a major achievement for the merchants of war machines. But does the Memorial include any explanation of BAE’s bribery scandals? That in February 2010 BAE reached settlements with the US Justice Department and the UK Serious Fraud Office concerning long-standing bribery charges. The company agreed to pay $400 million in the US and £30 million in Britain to resolve the cases.

Then there is the permanent exposition that started in August 2013 Afghanistan: The Australian Story. Boeing Defence Australia, a corporate partner of the Memorial since 2011, covered a lot of the costs associated with mounting the display. It provided $500,000 and threw in a ScanEagle unmanned aerial vehicle. Boeing told me it “remains a proud supporter of the Australian War Memorial”.

Yet since 2000 Boeing’s parent company has had to pay US$1.3 billion in penalties, the vast majority of which were for government contracting violations.

Boeing is also a major defence contractor to the Australian Government. Its Chinook CH47D twin blade helicopter, for instance, was a work horse in Afghanistan. Did no one on the Memorial Council in 2012-2013 recognise the troubling irony of an armaments’ maker bankrolling a war exhibition?

Then there is the Memorial’s unapologetic distortion of our military history. There is no critical examination of the pointlessness of so many aggressive engagements Australia has been involved in and of the shameful things done by Australian soldiers on the battlefield.

Consider the historical distortions in the Afghanistan War Exhibition, which go well beyond how museums and memorials in the other Coalition allies portray their presence in that war.

The US Veterans History Museum starts its exhibition with these words: “The United States has been stuck in an unwinnable quagmire in Afghanistan for years.”

Then there’s this contemplation of the British intervention from the National Army Museum in Chelsea:

“The war in Afghanistan spanned the tenures of three prime ministers and cost the lives of 453 British service personnel and thousands of Afghans. What was accomplished after 13 years of conflict, which included eight years of heavy fighting in Helmand, still remains open to debate.” (my emphasis added).

At the peak of the British input to the Afghanistan War, there were 137 UK bases and about 9,500 British troops in Helmand Province alone. At the height of the fighting, more than 600 flights a day used Camp Bastion’s 3.5-kilometre runway.

Similarly, the Danish War Museum’s exhibition A Distant War – A Danish Soldier in Afghanistan, avoids the Rambo script in favour of showing visitors a young Danish soldier’s journey from the safety of his childhood bedroom to distant Afghanistan, through Camp Bastion, the Green Zone and Gereshk then home via Tune Airport. And this one was mounted without jiggling the donation tin in front of arms dealers.

This level of honesty is unimaginable at the Australian War Memorial. A visit to its Afghanistan exhibition is like a trip to the Victorious Fatherland Liberation War Museum in Pyongyang, North Korea, where the curators leave nothing to chance that a different perspective could emerge.

Making all this worse is the Memorial’s morally contaminated relationships with arms dealers. Under the watch of Brendan Nelson as director, in addition to the Boeing and BAE Systems tie-ups, the AWM also began commercial arrangements with Lockheed Martin.

As director, Nelson also took a job advising Thales, the French arms manufacturer, for which he was paid a fee that he said he donated to the AWM. Documents obtained by the Guardian show the Thales job prompted concern within the Memorial. In any other statutory authority the conflict of interest provision in the Public Sector Code of Conduct would block such an appointment.

No limits to what Coalition will do to hide embarrassing information. Concealing a $1.3 billion arms deal.

Upon his retirement as director, Nelson was appointed president of Boeing Australia, New Zealand and South Pacific. Nelson is obviously experienced and talented. Were these the only abilities that proved attractive to Boeing? Nelson was defence minister for two years, leader of the Liberal Party, and had ambassadorial gigs in Belgium, Luxembourg, the European Union and NATO until 2012. Could his appointment have anything to do with his impeccable political connections and defence contracting knowledge?

The 20th anniversary of the Howard government’s decision to commit our special forces to the invasion of Afghanistan is almost upon us. Vicious abuses of human rights and callous and premeditated killing of unarmed Afghani civilians happened in the 12 years our forces were there.

We know this because of military whistleblowers, intrepid journalists, investigations by the Afghanistan Human Rights Commission and the cluster bomb evidence that Mr Justice Brereton will soon detonate to end his four-year investigation. While the Army is expected to take a reputational hit when more facts dribble out, Army media have been war-gaming public messaging options since last October.

The Brereton Report is tightly held by Army command and the highest levels of government. Into this highly improper information blackout, the Australian War Memorial will be there to tell us how to think about the Afghanistan War.

Charles Bean’s dream of collecting in one place the records of Australians at war came true when the Australian War Memorial opened in Canberra on 11 November 1941. With world-class curation (and lots of dollars) the memorial honours the valour of Australian men and women who have fought for our country.

Now the arms sellers, the new money changers, are in the Temple and the old war glorification agenda is resurgent. The Australian War Memorial is mutating from the keeper of the flame to the hider of the shame.