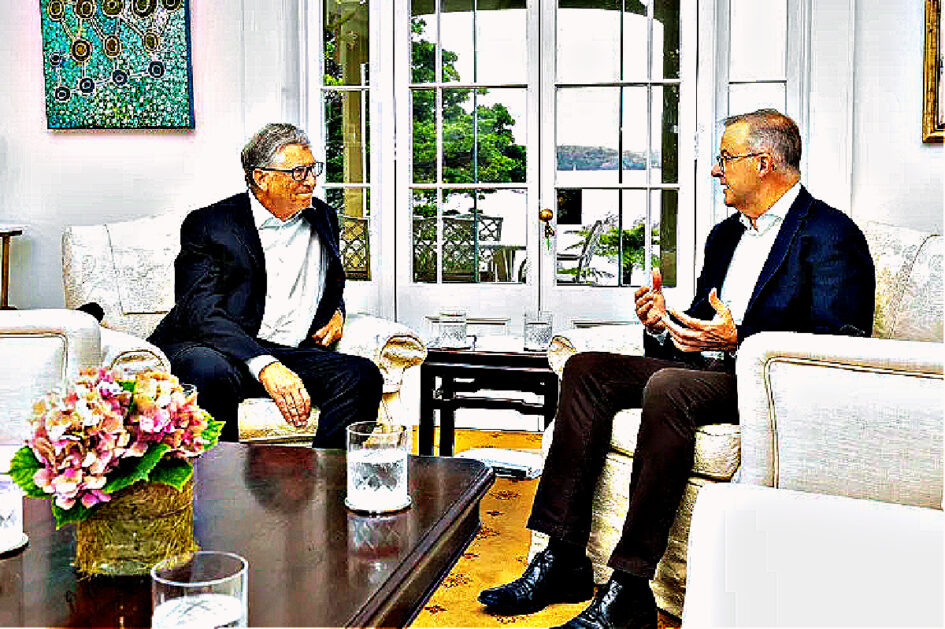 There are hundreds of thousands, if not millions of Australians who regard Bill Gates as little better than the devil incarnate; as the world’s Vaccine-Profiteer-In-Chief a man who belongs not in his private jet but in a prison cell. Worldwide, scandal after scandal has discredited almost everyone involved with perpetrating the agendas of the Covid Era. And most particular Mr Bill Gates.

Yet there he was, to the head shaking bewilderment of ordinary citizens, grinning and gripping with the Australian Prime Minister, proof positive that Australia is no longer a functioning democracy but run instead by global elites and the oligarchs who grew immeasurably richer on the back of the Covid panic they themselves engineered.

No ordinary citizen gets to sit in Kirribilli House and be told by the nation’s Prime Minister how very welcome they are.

Bill Gates, who is believed to have made tens if not hundreds of billions of dollars from the Covid-19 vaccines, that is “vaccines” which do not prevent infection, transmission, hospitalisation or death, ran Australia’s disastrous Covid response through his proxies, his loyal lieutenants and the institutes he funds, including the World Health Organisation, the Peter Doherty Institute, an armada of academics mopping up grant money in return for spruiking the benefits of vaccination, and Jane Halton.

That the Prime Minister of Australia would choose to meet so publicly with such an extremely controversial and frequently reviled figure as Bill Gates is an egregious insult to the many doctors, academics and protestors who despise the man, and a callous insult to the thousands of people who have been injured or killed by the vaccines he championed.

TOTT News was one of the only media outlets in Australia to point out the massive compromise of Australia’s public health systems involved in climbing onboard the Bill and Melinda Gates Vaccine Express. Now the entire world is alarmed; everybody, apparently, but the Australian Prime Minister. No amount of whitewash can cover the truth.

This is their report.

The puppet master touches down in Australia

Prime Minister Anthony Albanese has hosted a meeting this morning with Bill Gates, representatives from his company Breakthough Energy, and members from the Bill and Melinda Gates Foundation.

It is the first time the pair have met and they are tipped to have discussed responses to energy shortages, future pandemic responsiveness and ‘climate change’.

If Albanese, contained in his own bubble of public service sycophants, thought the grin and grip with Gates was a good idea perhaps he should have read some of the replies to his official Twitter feed.

Radge declared: “Ahah, Moderna in Monash Uni to produce mRNA vaccines, Bill Gates wants livestock to be jabbed so that next time round, doses by consumption…more heart problems, depopulation-simple really…The boy from the slum, you are a complicit criminal.”

David Flood tweeted: “most of us can see through the thinly veiled globalist agenda. You’re blatantly selling out all Australians. The worst part is there’s not a damn thing we can do about it. It isn’t about politics, it’s about right & wrong. Trojan Horses – climate crisis, pandemic, Ukraine.”

Compute My Head Strap: “In just 22 days, over 1000 Aussies have died bc they caught Covid in the community.”

Another: “The people who elected you, elected YOU Albo. You have not been given a mandate to seek counsel from Gates. Gates does not have the people’s best interest at heart”

And another: “Shame on you.”

On and on it went.

In a mediated world, this was as close to the public as the perpetrators ever got.

Albanese thanked Gates for his ‘contribution to global health research’ and explained his government’s approach to climate change.

“We haven’t met before but I’ve admired your work and your contribution not just financially but in raising debates including the need to deal with health issues,” he told reporters.

“We’ve just been through the pandemic but we need to prepare for future health challenges and the work that’s been done on eradicating malaria and other diseases in our region.

And of course climate change, my government was elected on a platform of taking climate change seriously, we’ve introduced the first legislated caps of 43 per cent by 2030 and net zero by 2050.”

The billionaire thanked the PM for the welcome and said he was ‘looking forward to working with the government’.

“We’ve had a great partnership on global health Gavi, polio thanks for your increase on the Global Fund,” Mr Gates said.

A very out-of-the-blue touch down by ole’ Billy Boy on our shores, and if this is any indication of what they have revealed on a public level, just imagine what they are discussing behind-the-scenes.

No doubt prepping our new Puppet Minister on the course of action to be taken over the next four years.

Perhaps Bill’s expressed his plans for a ‘rapid response team’ to future pandemics? Perhaps to discuss his new book, which is a blueprint for world health control? Perhaps to clamp down on conspiracy theories?

Either way, Gates has been increasingly aligned with Australia and our establishment elitists in recent years, as we bow-down to the ‘expert advice’ of this man with no medical degree or political experience.

This is another chapter in the Gates-Australia love affair. As in, he loves Australia.

Australia is in the good books of controversial eugenicist Bill Gates, after the ‘philanthropist’ had positive comments regarding this country’s coronavirus response.

In 2020, the billionaire praised Australia’s efforts when asked who he thought was doing best at balancing the pandemic response: “South Korea, Australia – because this is an exponential event, a little bit of intelligence early on makes a huge difference,” he said.

This was when we had some of the world’s harshest lockdown restrictions. Go figure.

Let’s not forget: On 21 April 2020, it was reported that Prime Minister Scott Morrison spoke with Bill Gates to share thoughts on the potential of a future COVID-19 vaccine.

I wonder what Albanese will soon start sinking hundreds of millions of dollars into?

The point of this visit, on a deeper level, shows us one main thing:

It doesn’t matter what side of the fake political theatre show is ‘elected’, our ‘representatives’ will always be subservient to higher powers that truly shape the world around us.

It’s a big club. One that continues to fool the masses in believing ‘governments’ are in-charge

No doubt, we can expect implementations of Gates’ ‘expert advice’ on climate change and future pandemics, and this gives us a reason to keep on our toes as to what is coming in the future.

Almost three years since this pandemic began and still we can’t shake the flees off.

Feature image digitally manipulated from an original by Rhett Wyman from The Sydney Morning Herald.