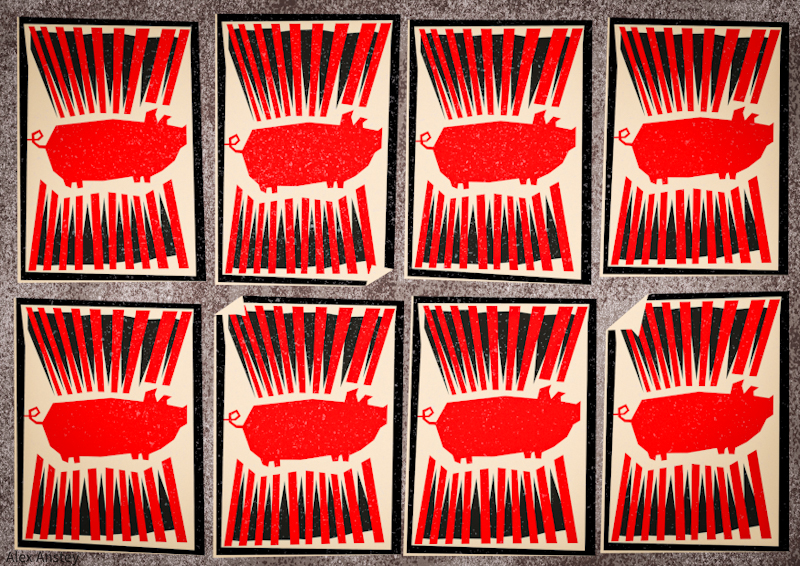 “I suspect Orwell would see, as he did back in the 1930s, the rich and outrageous irony of governments using the resources of the people to manipulate them and to keep them acquiescent, passive and apathetic.”

Unfortunately Thompson’s bill never got up. John Howard’s majority saw to that. It has now become widespread practice for Coalition ministers to spend public money advertising their political parties.

The dubious practice reached a flashpoint this week after Health Minister Greg Hunt was caught branding an announcement for Pfizer vaccines with the LNP logo. Hunt was questioned about the political party advertising by ABC presenter Michael Rowland and responded with personal insults, branding Rowland a “leftie”.https://platform.twitter.com/embed/Tweet.html?creatorScreenName=callum_foote&dnt=false&embedId=twitter-widget-0&frame=false&hideCard=false&hideThread=false&id=1359257406618824704&lang=en&origin=https%3A%2F%2Fwww.michaelwest.com.au%2Fadrorts-comrade-hunt-deploys-communist-propaganda-tactics-in-government-advertising%2F&partner=tfwp&siteScreenName=MichaelWestBiz&theme=light&widgetsVersion=889aa01%3A1612811843556&width=550px

It was Greg Hunt and Minister for Immigration David Coleman who brought back the practice of branding announcements for regional Australia with the LNP Logo back in 2019.

The Health Minister, however, is not the only MP who has misused ministerial announcements for free party advertising.

For the Liberals, the Minister for Communication Paul Fletcher, Assistant Treasurer Michael Sukkar, Minister for Immigration David Coleman, Assistant Minister for Children and Families Michelle Landry and newcomer Fiona Martins have all been found branding their announcements over the past two years.

Government MPs have also been interchangeably branding announcements with ‘The Coalition Government’ and ‘The Morrison Government’.

The Nationals have been slower on the uptake.

Nationals MP Pat Conaghan then used the Nationals logo on a post announcing the much-maligned Stronger Communities Program in August 2019. The scheme was labelled a pork barrelling operation, with 95% of its $252 million going to councils in Coalition seats.

Interestingly, Scott Morrison and Josh Frydenberg, the two most prominent ministers in the government, have not engaged in the practice.

While the two use an LNP colour scheme for their announcements, they refrain from using the ‘The Morrison Government’ or LNP logos; although Morrison has retweeted his Ministers using both forms of branding.

It appears that the LNP marketing department has been strengthening their ministers’ branding since mid-2019.

Some Liberal MPs, such as Darren Chester, refrain from party branding, preferring to use the Australian Government logo.

These tweets are only the most recent example of an Australian government using official announcements as party advertising.

In 2005, the Shadow Minister for Public Accountability Labor MP Kelvin Thompson put forward the Government Advertising (Prohibiting use of taxpayers’ money on party political advertising) Bill. The bill was ultimately defeated by the Howard government’s majority.

The Bill’s objective was to:

If passed, the Bill required government communications to “be presented in a manner free from partisan promotion” and “should avoid party-political slogans or images”.

In Thompson’s introductory speech, he referenced the use of public money by totalitarian regimes in the 1930s to manipulate their citizens into believing the party and the state were one:

“It was George Orwell who saw clearly and nailed in books like Animal Farm and 1984 the way in which the fascist and communist governments of the 1930s used the resources of government to indoctrinate their own populations, manipulating language and elevating political propaganda into an art form.

“One must wonder what Orwell would make of today’s government advertising campaigns if he were still alive. I suspect he would see, as he did back in the 1930s, the rich and outrageous irony of governments using the resources of the people to manipulate them and to keep them acquiescent, passive and apathetic.”

No federal government, Liberal or Labor, has passed legislation to establish official guidelines prohibiting the use of official communication for political gain.

The Australian Electoral Commission (AEC), the regulatory body that oversees campaign financing and advertising, denied any responsibility for ministerial communications being used as campaign advertising.

Responding to questions put forward by Michael West Media, Justin Snowden, the acting Director for the AEC, said that “in relation to the actual content of public communications, the AEC has no role in examining the content of such information”.

Snowden added that with an exception for “misleading and deceptive communication”, the AEC “is unable to take any action against these tweets and images where they come from a social media account or website that includes an authorisation as required by the Electoral Act”. The Twitter profiles in question have the required authorisation.

While the Department of Finance provides guidelines on spending for government advertising no other government agencies regulate these types of communication.

The AEC refused Michael West Media’s request for a further interview with their Commissioner and Deputy Commissioner.

Callum Foote is in the vanguard of a new generation of Australian journalists making a name for themselves in Australia’s increasingly vibrant independent media. He is the editor of the groundbreaking series Revolving Doors for Michael West Media. Callum’s specific interest is undue corporate influence over Australian policy decisions and the savage impact this is having on the nation as a whole.