This Must Surely Be The Most Corrupt Government in Australian History: The Best of 2021. 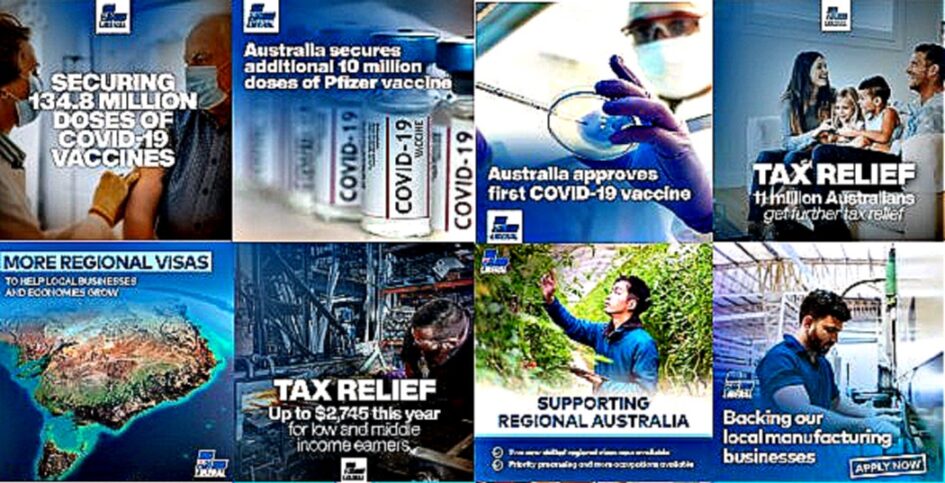 AdRorts, on the back of the Covid, is the latest corrupt practice in a prodigious body of Australian government dirty work.

Is the Covid-19 vaccine the Liberal Party’s vaccine or the Australian Government’s vaccine? It’s not their money but the Liberal Party has its logo plastered across advertisements for millions in Government grants. This #AdRort campaign is but the latest in a grotesque throng of rorts, such that this must surely be the most corrupt government in Australia’s history. Elizabeth Minter and Michael West report.On ABC TV Breakfast yesterday morning, journalist Michael Rowland asked Health Minister Greg Hunt why he felt the need to attach the Liberal Party logo to an Australian Government announcement that stated: “Australia secures additional 10 million doses of Pfizer vaccine.”

Hunt refused to answer, instead responding with an aggressive ad hominem attack on the professionalism of the journalist.

That the Government would be so reckless to politicise a public health message is extraordinary, especially during a pandemic and especially on the issue of vaccination, which is proven to be a fraught issue around confidence. People need to trust the message being sent.

Yet it is in step with Australia’s rising political corruption. Also this week, it was reported that Australia has slipped to 11th position on the TIA Corruption Perception Index, a fall from 7th in 2012.

Rowland further asked: “Who paid for the vaccines?”

The only answer is, of course, the public. The public, not the Liberal Party. The public also paid for the announcement itself.

Yet Hunt responded: “I know this is an issue for you, you identify with the Left …” and spent the rest of the interview attacking Rowland’s professionalism with the sort of blithe smugness which comes with seven years in office getting away with rorting, and with impunity.

Propriety, accountability; these are things of the past. It is official in fact. These people are not the stewards of our money. Apparently they deem that public money belongs to the Liberal and National parties to do with as they wish. The Coalition’s money, the vast bulk of it flowing from wealthy donors and very large companies, has become indivisible from public money, at least in the minds of Coalition politicians.

When Michael Rowland asked that simple question, Hunt couldn’t respond honestly, because to do so he would have to admit that the Coalition was using taxpayers’ money to benefit the Liberal Party.

It is just another in a long line of examples of the Coalition spending taxpayers’ money for their own political ends. It is a rort – #adrorts, just like sports rorts, community grants rorts, bushfire rorts, and the rest.

A Facebook video shows a yacht club treasurer in @GregHuntMP‘s electorate thanking him for the “work behind the scenes” securing just over $170,000 from the controversial sport grants program.@paulwkennedy asks the Minister what that meant. pic.twitter.com/JY4drNgV8y

As revealed by Michael West Media on Australia Day, the Coalition NSW and Federal governments rorting of the $177 million in bushfire recovery funds was extraordinary.

When questioned this week during a parliamentary inquiry looking into the rorting, NSW Deputy Leader John Barilaro, who oversaw the grant process, dismissed criticism of the grant was a “witch hunt”.

Neither NSW Labor or NSW Greens or the general public knew of the existence of this $177 million stream of bushfire recovery funding and there was no application process.

This seems to be a recurring theme. On the eve of the 2019 election, PM Scott Morrison announced a $150 million fund for female change rooms and swimming pools in a nationwide program. But the scheme was never open for applications. Two Liberal-held seats received 40 per cent ($60 million) of the funding – the ultra-marginal Corangamite, which the Liberals lost, and the marginal WA seat of Pearce, which Attorney-General Christian Porter retained.

In January 2020, the Commonwealth Auditor-General found that the office of the Nationals Bridget McKenzie made up its own rules for doling out $100 million of sports grants in the lead up to the 2019 federal election in a process that was possibly illegal.

Law firm Maurice Blackburn is now seeking documents from Sports Australia relating to McKenzie’s role in approving the grants. The law firm is acting for Beechworth Lawn Tennis Club which missed out on a grant despite its application rating highly.

The Sports Rorts affair however is dwarfed by the community development grants rorts, which is 25 times bigger at $2.5 billion plus. As reported by Michael Pascoe, analysis of the Government’s GrantConnect website showed Coalition seats scored 75.5% of 2019’s grant money, while Labor seats managed just 19.9%. Of the 68 federal seats Labor now holds, 22 have never received a cent in community development grants.

Some 94% ($234 million of the $248 million) of the Regional Growth Fund grants that were awarded just before the 2019 election went to Coalition seats.

Marginal seats featured strongly and in the rare instance where grants were awarded to Labor-held seats, the announcement was made by the local Coalition candidate or Coalition senator. Sitting members didn’t get a look in.

Who can forget that picture of Georgina Downer, the Liberal Party candidate for the seat of Mayo in South Australia, who posted a photo to her Facebook page showing her holding a novelty cheque — with her face and name — for $127,373 to fix the Yankalilla Bowling Club’s third bowling green. The local MP for Mayo is the Independent Rebekha Sharkie. Yet the Coalition was so determined to get Downer Junior into the seat they wasted $127,373 of public money trying it.

During the 2019 election, The Coalition Government ignored its own criteria in awarding $1 million drought grants, with six of the 14 councils not meeting the requirement that at least 17% of its workers be employed in agriculture. Of the 14 councils, 13 were in Coalition-held electorates.

Then there was the regional infrastructure grants program, administered by Deputy Prime Minister Michael McCormack, who awarded 94% of the grants to electorates held or targeted by the Coalition in the months leading up to the 2019 federal election.

And last but not least, there was the $3 billion Urban Congestion Fund, the vast majority of which went to Coalition and marginal seats in the lead-up to the 2019 federal election, according to analysis by the Labor Party.

These are the biggest and most well-known in the resume of rorts by the present government For travel rorts, expenses rorts and all manner of other rorts, some motivated by personal greed, others by political ambition, please visit our Q.E.D – the Case for a Federal ICAC compendium of rorts.

Elizabeth Minter began her career in journalism in 1990 and worked at The Age newspaper for two 10-year stints – as a reporter, sub-editor, layout sub, and Letters Editor for eight years. She also worked at The Guardian newspaper in London for more than seven years as a sports sub-editor and a production editor. In a former life, she was a professional tennis player for seven years, winning the US Open junior title in 1983 and representing Australia in the 1984 Fed Cup. She has a Bachelor of Arts and a Bachelor of Letters (Hons). Her Twitter handle is @LizMinter