Farewell to 2021 in Australia’s Federal Politics: The Year of Disappointment 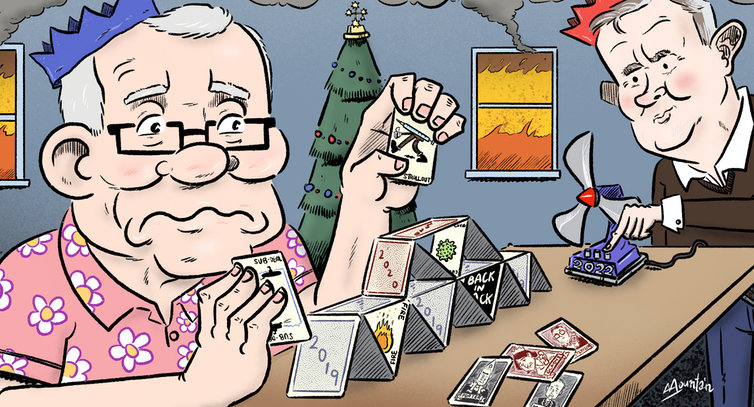 Some will recall it as 2021. For more, it will be Year 2 of COVID. Either way, it will have been a time of disappointment for many. And the nation’s politicians need to bear a large share of the responsibility for that feeling.

It’s easy to imagine a different scenario. As 2020 ended, there were disappointments, too, with parts of Sydney in lockdown. But most imagined that, with vaccines on the way, our future would be brighter.

While there had been a tragic second wave of infections in Victoria that reflected poorly on its Labor government, the country’s decision-makers had taken advantage of Australia being an island nation, imposed external and internal border controls, and established an effective tracing system.

There had been some failures, and several hundred fatalities, and many Australians abroad were treated harshly. But governments succeeded in their primary duty of preserving our safety, and they seemed to have done well in propping up the economy in tough circumstances.

What an opportunity this scenario offered!

An efficient vaccination program delivered rapidly in the first half of 2021, targeting vulnerable groups first, then extending quickly to the rest, would have provided substantial protection from COVID’s Delta strain when it arrived. The construction of quarantine facilities could have allowed the safe return of Australians stranded overseas.

Instead, the federal government mismanaged vaccine procurement, muddled its messaging, did nothing much about quarantine and stuffed up the “rollout” – both of Australia’s national dictionaries embraced “strollout” as their Word of the Year.

Millions unnecessarily spent much of 2021 locked down. Some paid with their lives, and others with their health, jobs and businesses. The economy has suffered another multi-billion-dollar shock.

It would be easy to blame the Morrison government. After all, its indolence and squalor became increasingly plain during 2021.

But there is something more alarming at the heart of these failures: a basic frailty in national government. So energetic when chasing down “welfare cheats” and in persecuting whistleblowers, Australia’s federal government is just no longer very good at the hands-on delivery of anything of serious complexity.

The JobKeeper scheme acclaimed as a national saviour in 2020 was revealed this year as an efficient scheme whereby the already filthy rich could become even filthier and richer.

Unleashed in haste, it lacked basic mechanisms for checking whether those claiming its benefits had actually suffered their anticipated losses. The result has been an unprecedented looting of the country’s treasury, all within the law.

JobKeeper contributed to a larger narrative that has gathered a hold: that the Morrison government lacks honesty and integrity. Its resistance to creating a proper anti-corruption commission is widely seen as prima facie evidence of its own fear of what one would find.

Scott Morrison instead raises the furphy of ICAC’s treatment of the former New South Wales premier, Gladys Berejiklian, as an objection to a federal body on anything like that model.

Australian conservatives and some on the Labor side, too, have long resolutely opposed the concept of a bill of rights, yet now we find just one right being elevated above others – religious freedom – which in the hands of the government amounts to an enhanced right to discriminate against sexual minorities.

Predictably, its effort has done little more than draw adverse attention to the expansive right that already exists to do just that in the Sex Discrimination Act, the result of lobbying of the Hawke Labor government by the churches.

The Morrison government is certainly interested in accountability, but not in the accountability of politicians to voters. Its preferred version is the accountability of the people to their political masters. So, far from protecting whistleblowers against government illegality and wrongdoing, it prosecutes them with vigour. It sought to impose US Republican-inspired voter ID laws to deal with a problem that only it seems to believe exists.

And it wants to make it easier for politicians to sue members of the public who say objectionable things about them on social media.

The same politicians who tell you that they believe resolutely in protecting women’s right to be free of sexual harassment maintain a workplace in Canberra, with its adjuncts in their electorate offices, that would disgrace the most rancid feudal regime.

The reckoning in these matters has arrived, but the prime minister repeatedly displayed his inability to understand what is at stake. On one occasion, he began a media conference expressing his sympathies with the plight of women but ended up issuing a thinly veiled threat to the female journalist most prominent in reporting of the issue.

Which brings us to Morrison himself.

The idea that he routinely lies now clings to him like a politician to a freebie. The extraordinary attack on him by French President Emmanuel Macron, over the mismanagement of the submarine contract and the AUKUS agreement, confirmed a sense of Morrison as a small-time Sydney politician morally and intellectually out of his depth, and lacking in the necessary gravitas or judgment to deal with complex international affairs and major world leaders.

It seemed odd, at the beginning of 2021, that we still didn’t have a single book about him. Was he too uninteresting to bother?

Now we have several, but the turn in Morrison’s fortunes was so rapid that it defeated the efforts of authors to keep up. When Wayne Errington and Peter Van Onselen’s How Good is Scott Morrison? went off to the printers, the authors were convinced he was a shoo-in for the next election. By the time it appeared in the bookshops, the edited extract that appeared in The Australian suggested they were rather less sure.

The year saw a remarkable leaching of Morrison’s standing and authority, not least in relation to state and territory leaders.

But they too had their problems: Berejiklian lost her job when ICAC announced it had launched an investigation into her conduct. Daniel Andrews in Victoria suffered a serious back injury at the beginning of the year and faced large “freedom” protesters waving the Eureka Flag at the end of it. Mark McGowan seems a little less shiny than a year ago, as Western Australia’s severe border restrictions extend into 2022.

And we have a federal election to come.

Labor leader Anthony Albanese, having kept his powder dry for years, is beginning to drip-release policies, seeking just enough distance over issues such as climate policy for product differentiation without frightening the horses. He seems to wish to slip quietly into office rather as numerous Labor state and territory opposition leaders have done over the past 25 years.

Morrison is now transformed from goofy Scomo into biblical Moses, leading his people out of the COVID desert into the Promised Land of “Freedom”.

But he still must try keeping the increasingly wild right flank of his Coalition government solid while attending to the threat that independent and Labor candidates pose to metropolitan Liberal seats.

His government ended the year by losing two ministers to scandals, with another announcing his retirement at the next election. Morrison’s grip on the Coalition party room was now so loose that it called into question his grip on the House of Representatives itself.

The election result seems less certain than in the months before the 2019 election when it was all rather obvious that Labor and Bill Shorten were heading for a famous victory.

Readers will understand if I refrain from offering a prediction.